Deaths caused by ovarian cancer declined worldwide between 2002 and 2012, particularly in the United States and European Union member countries, according to data published in Annals of Oncology.

Further, rates of ovarian cancer mortality are predicted to continue to decline. Researchers identified long-term protection conferred by oral contraceptive use, as well as a drop in hormone replacement therapy use, as the primary reasons for this decline.

“Over the past 2 decades, ovarian cancer mortality rates have tended to level off and decrease in several high-income European countries and North America, where rates were highest,” Eva Negri, PhD, ScD, head of epidemiologic methods at the IRCCS Istituto di Ricerche Farmacologiche Mario Negri in Milan, and colleagues wrote. “Advancements in diagnosis and treatment may also have influenced these trends, particularly in high-income countries. However, persisting marked differences in ovarian cancer patterns and trends across various areas of the world remain.”

Negri and colleagues sought to update global trends in ovarian cancer mortality and to predict trends through the year 2020.

The researchers used the WHO database to evaluate death certification data from 1970 to 2012, or the most recent available year, based on country.

Data from all European Union member countries, with the exception of Cyprus, were available, as well as from 11 North American countries and six other countries worldwide. The researchers excluded countries with fewer than 2 million inhabitants or fewer than 500 deaths attributed to ovarian cancer from 2005 to 2009.

The highest declines occurred in northern and central Europe. Sweden had the greatest decline among member countries (24%), and Poland had the lowest (8%).

Ovarian cancer deaths in North America declined by 16%. The United States and Canada had mortality rates lower than 4.9 deaths per 100,000 women in the year 2012.

“The large variations in death rates between European countries have reduced since the 1990s when there was a threefold variation across Europe,” Carlo La Vecchia, MD, of the faculty of medicine at University of Milan, said in a press release. “This is likely to be due to more uniform use of oral contraceptives across the continent, as well as reproductive factors, such as how many children a woman has. ... The mixed pattern in Europe also helps to explain the difference in the size of the decrease in ovarian cancer deaths between the European Union and the U.S., as many American women also started to use oral contraceptives earlier.”

The researchers observed inconsistent trends in Latin America, although overall rates were systematically lower in Latin America — between 2.8 deaths per 100,00 women in Brazil and 4.3 per 100,000 in Uruguay — than in the United States and Europe in 2012.

Although mortality rates in younger women declined in Japan (1.9 per 100,000), they remained higher than rates among similarly aged women in Europe (1.6) or the United States (1.2).

“Japan, where deaths from ovarian cancer have traditionally been low, now has higher rates in the younger than the U.S. or the European Union — again, reflecting infrequent oral contraceptive use,” La Vecchia said.

Among women aged 70 years to 79 years, mortality rates in the European Union declined by 2.2%. The largest decline in this age group occurred in the United States (17.6%).

“The use of hormone-replacement therapy declined after the report from the Women’s Health Initiative in 2002 highlighted the increased risk for cardiovascular disease, as well as breast and ovarian cancers, and so this may also help to explain the fall in death rates among middle-aged and older women,” Negri said in the press release.

“Other environmental factors, including obesity and diet, have been related to ovarian cancer risk,” Negri and colleagues wrote. “The quantification of their effect on national mortality rates remains undefined.” – by Cameron Kelsall 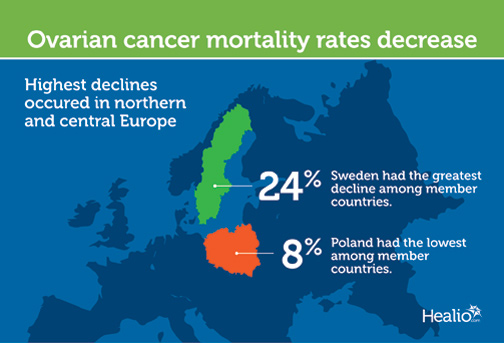 Malvezzi and colleagues have provided a provocative and hypothesis-generating analysis of global ovarian cancer trends. The researchers used death certificate data to calculate age-standardized mortality rates and reported a decrease in age-adjusted ovarian cancer mortality between 2002 and 2012.

In epidemiological studies, associations — not causations — can be inferred. The researchers credit the improvement in ovarian cancer mortality to an increase in oral contraceptive use and a decrease in menopausal hormonal therapy.

Although encouraging, the results — with their broad characterizations and generalizations — do not account for the heterogeneity that exists in ovarian cancer, including different histologies, risk factors, treatment strategies, and the multifactorial and differential impacts on outcomes, including death. Can we reasonably expect hormonal therapy to exert a uniform effect across all histologies and age groups? What effect can we expect from and attribute to advances in treatment, standardization of care and access to that care?

Improvements in outcomes for patients with ovarian cancer are desperately needed. It is in knowing where those limitations exist that improvements can potentially be addressed and realized.