Advanced spatial analysis identified three areas in the U.S. with excessive death rates from colorectal cancer, according to study results.

“Although we’ve made great strides against colorectal cancer in a fairly short time period, there are a lot of vulnerable populations that aren’t benefitting,” Rebecca L. Siegel, MPH, director of surveillance information in the Surveillance and Health Services Research Program at the American Cancer Society, said in a press release. “These areas are low-hanging fruit for colorectal cancer screening interventions.”

Spatial identification of high-risk areas can be used to enable screening interventions, according to study background.

Siegel and colleagues used the Getis-Ord Gi* (ArcGIS) statistic — a geospatial software tool — to identify areas in the U.S. with very low or very high rates of colorectal cancer deaths. They comparted areas with very high mortality rates — called “hotspots” — with the remaining aggregate counties by plotting trends from 1970 to 2011.

Black and white patients experienced similarly elevated risks for colorectal cancer death in this region. However, mortality rates among black men steadily increased 3.5% per year between 1970 and 1990, when they reached their current rate. 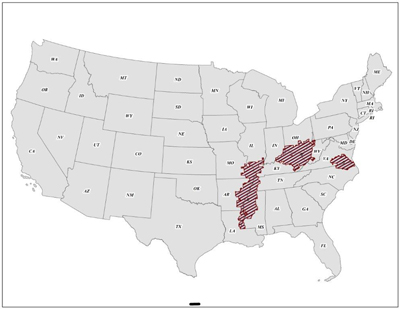 The researchers identified two additional hotspots with significantly elevated colorectal cancer mortality rates. The west central region of Appalachia — comprised of 107 counties in Indiana, Kentucky, Ohio and West Virginia — had an 18% elevated rate compared with non–hotspots (RR = 1.18; 95% CI, 1.14-1.22). A hotspot of 26 counties in southeastern Virginia and 11 counties in northeastern North Carolina had a 9% elevated risk compared with non-hotspots (RR = 1.09; 95% CI, 1.02-1.17).

The researchers acknowledged limitations of their study, including the inability to verify data related to the disproportionate colorectal cancer burden in hotspots.

“Targeted interventions, like using people within the community to talk to their neighbors about screening, are likely to be effective,” Spiegel said. “We know interventions work because we have an example in Delaware, where they implemented statewide colorectal cancer screening and effectively eliminated disparities in less than a decade.” – by Cameron Kelsall