Imaging results demonstrate everything that glitters is not gold

This case profiles a 46-year-old woman with no significant medical history who was referred by her infectious disease specialist to the ED in May for left arm pain and swelling.

In March, the woman patient noted a boil in her posterior left axilla, which was treated with incision and drainage at an outside hospital, followed by a 10-day course of sulfamethoxazole-trimethoprim (Bactrim, Mutual Pharmaceutical). Two weeks later, the patient experienced pain, redness and swelling in the left arm. Evaluation at the outside hospital demonstrated no radiographic evidence of bony involvement, so she was treated with analgesics for a presumed pulled muscle.

When her symptoms worsened into late April, the patient went to a second outside hospital for left arm pain. A bone biopsy revealed methicillin-resistant Staphylococcus aureus (MRSA) sensitive to daptomycin (minimum inhibitory concentration, 0.5 mcg/mL), and she was diagnosed with osteomyelitis.

She was started on daptomycin 366 mg IV daily and discharged 4 days later with continued home infusions.

In early May, the patient continued to experience worsening left arm pain. She also noted yellow discharge at the site of biopsy, at which point she arrived at our institution for orthopedic and infectious disease evaluation.

At presentation, the patient complained of intense left arm pain and swelling. She denied fevers, chills, rashes or pruritus. The patient also denied numbness or tingling of the extremities. She was afebrile, with unremarkable vital signs.

Physical exam revealed a 4-cm incision at the left humerus with pus oozing from the biopsy site. Her neurological examination was intact. There was no clubbing or cyanosis of the extremities. Radial pulses were 2+ symmetric on both wrists.

Daptomycin was discontinued and, upon admission, she was placed on vancomycin 1 g IV every 12 hours. Biopsy cultures had revealed MRSA sensitivity to vancomycin with MIC of 1 mcg/mL. 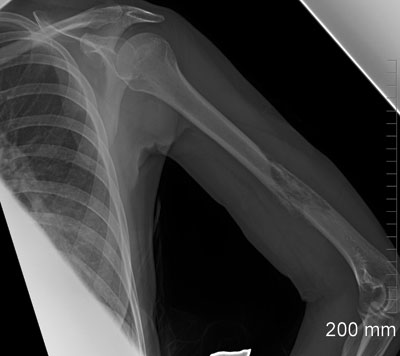 An initial radiograph to the left humerus demonstrated a permeative infiltrating lesion at the midshaft of the humerus with cortical thinning and surrounding periosteal reaction (Figure 1). No definite fracture line was identified. No radiopaque foreign body was identified in the soft tissues. This lesion was further evaluated with a technetium-99m MDP (methylene diphosphonate) whole-body bone scan (Figure 2), which demonstrated a focus of markedly increased uptake in the region of the left humeral diaphysis. 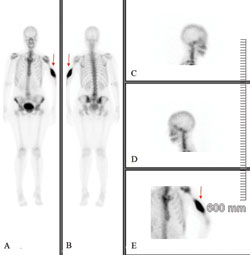 That same day, MRI of the left humerus revealed a 12-cm area of diffuse bone marrow signal abnormality consistent with edema involving the mid to distal humeral shaft with large cortical erosions (Figure 3). There were soft tissue edematous changes posterior and inferior to the humerus without drainable collection, involving the anterior margin of the triceps as well as brachioradialis muscles.

The next day, the patient underwent a CT examination of the chest, abdomen and pelvis, which demonstrated mild axillary adenopathy without evidence of occult malignancy. 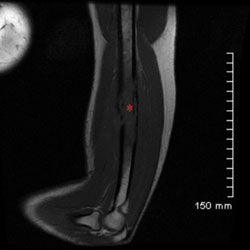 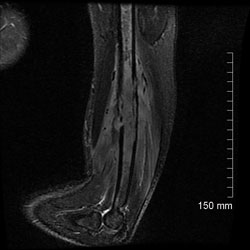 Approximately 2 weeks after the second biopsy, a repeat left humerus radiograph (Figure 4) demonstrated increased callus tissue around the osteolytic lesion and increased sclerosis within the marrow cavity, consistent with osteomyelitis responsive to vancomycin treatment. No new lesion was identified. The patient was discharged home with plan to finish a 6-week course of vancomycin.

Compared with soft tissue infections, which constitute up to 90% of community-associated MRSA infections, osteomyelitis secondary to MRSA are much rarer and pose a diagnostic challenge to radiologists. 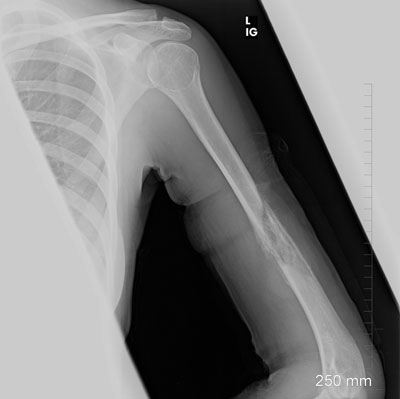 Figure 4. Follow-up frontal radiograph of the left humerus demonstrates increased callus tissue around the osteolytic lesion in the left mid humerus with increased sclerosis within the marrow cavity. No new lesion is identified.

Osteomyelitis was thought to be an unlikely primary etiology, given that the patient experienced worsening symptoms while into her third week of treatment with daptomycin, a cyclic lipopeptide that shows marked bactericidal activity to which her MRSA strain demonstrated sensitivity.

The absence of fever and leukocytosis throughout the patient’s hospital course at our institution also provided evidence for etiologies other than osteomyelitis as the primary diagnosis. Metastatic disease to the bone, although more common in the patient’s age group compared with a primary bone malignancy, also seemed unlikely given the lack of clinical history, the normal laboratory results, and the essentially negative CT examination of the chest, abdomen and pelvis.

Osseous MFH is a primary bone neoplasm most commonly seen in late adult life, accounting for 5% of all primary malignant bone tumors. It is characterized by fibroblast-like and histiocyte-like elements that produce aggressive bone destruction, predominantly in the central metaphysis of long bones with extension into the diaphysis. The radiographic appearance of osseous MFH is a purely osteolytic lesion with a variable zone of transition, not typically accompanied by periosteal reaction. Bone scintigraphy demonstrates nonspecific uptake throughout the lesion, as seen in our patient. MRI is particularly useful in detecting the degree of intramedullary extension and soft tissue involvement.

Primary bone lymphoma, which accounts for less than 5% of all primary bone tumors, is defined as lymphoma in an osseous site without disease elsewhere for at least 6 months after diagnosis. Radiographic characteristics vary from near-normal appearing bone to a diffuse permeative lesion, as seen in our patient. On MRI, the lesion is T1-hypointense with variable T2 signals depending on the degree of reactive marrow changes or fibrosis. Diffuse uptake on bone scintigraphy is characteristic.

The final pathologic diagnosis of acute or chronic osteomyelitis, without evidence of neoplasm, was unexpected given treatment failure with daptomycin to which the patient’s MRSA strain demonstrated apparent susceptibility. Suboptimal daptomycin dosing may have contributed to treatment failure.

Daptomycin is currently licensed at doses of 4 mg/kg to 6 mg/kg, with higher doses considered in the setting of osteomyelitis or bacteremia. Diligent patient follow-up with monitoring of serum drug levels throughout the antibiotic course is essential in ensuring treatment success.

Munir Ghesani, MD, is an attending radiologist at St. Luke’s-Roosevelt Hospital Center and Beth Israel Medical Center, an associate clinical professor of radiology at Columbia University College of Physicians and Surgeons, and a HemOnc Today Editorial Board member. He can be reached at Department of Radiology, Beth Israel Medical Center, First Avenue at 16th Street, New York, NY 10003; email: mghesani@chpnet.org.