A 78-year-old woman presents with diplopia and ptosis

A 78-year-old woman who had not seen a physician since 1973 presented to the ophthalmologist in March 2012 with right-sided diplopia.

Upon being diagnosed with glaucoma, she was given timolol eye drops and underwent laser therapy; however, her diplopia did not improve. It was later associated with right-sided ptosis and an inward squint, but her visual acuity remained intact.

On examination, she was noted to have a right-sided ptosis with inward strabismus and a right obliterated nasolabial fold. Other cranial nerves were intact, as were her power, sensation, cerebellar functions, deep tendon reflexes and gait. She did not have any lymphadenopathy or splenomegaly.

A head CT without contrast revealed multiple supratentorial white matter hypodensities, which were reported as nonspecific and most consistent with mild microvascular ischemic changes. There was no report of a mass effect, midline shift, hydrocephalus, acute intracranial hemorrhage or an abnormal extra-axial fluid collection. The visualized portions of the calvarium and orbits were normal, but the posterior soft tissues of the nasopharynx were reported as being incompletely imaged with some nonspecific enlargement. 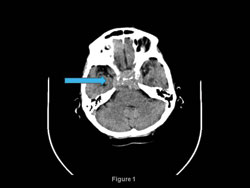 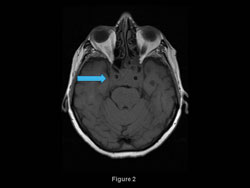 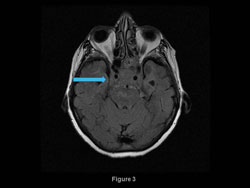 She underwent an MRI of the brain with and without contrast that revealed a lobulated enhancing mass centered at the pituitary fossa/central skull base with an extension into the suprasellar cistern, nasopharynx and prepontine cistern. It measured 5.2 cm x 4.6 cm x 3.6 cm, and it was abutting the undersurface of the right pre-chiasmatic optic nerve without significant associated mass effect.

Anteriorly, it encroached upon the sphenoid sinuses — the left more so than the right — and posteriorly, it involved the prepontine cistern with mild resultant posterior displacement of the basilar artery and sparing of the pons. Inferiorly, it extended into the nasopharynx and made possible contact with the soft palate. There was no evidence of a midline shift, hydrocephalus, abnormal extra-axial fluid collection or an infarct. There were multiple nonspecific white matter foci of T2 hyperintensity, most consistent with mild chronic microvascular ischemic changes.

The patient then started to feel weaker and sustained a fall. She was admitted to the hospital and was found to be hypertensive and hypothyroid. She was started on antihypertensives and levothyroxine and was discharged. Soon after, she started developing intermittent fevers, chills and night sweats/drenching, so she was readmitted. 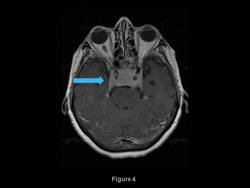 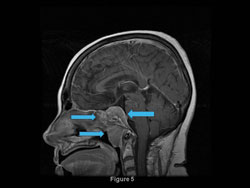 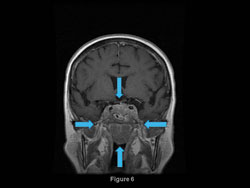 Pan cultures were sent and the patient started empirically on antibiotics. The cultures were negative and, therefore, her antibiotics were stopped. A subsequent biopsy of the previously seen nasopharyngeal extension of her intracranial mass showed it to be CD20+, CD79a+, PAX5+, BCL2+, CD3-, CD5-, CD10-, CD23-, BCL6-, cyclinD1- and Mum1-, consistent with extra-nodal marginal zone B-cell lymphoma of mucosa-associated lymphoid tissue.

A PET/CT revealed hypermetabolism in the base of the skull involving the posterior nasopharynx with a standard uptake value (SUV) up to 13, a lymph node in the left suprahyoid posterior neck with an SUV of 4.8, and a nonspecific mesenteric lymph node with an SUV of 3.1. A bone marrow biopsy showed a normocellular marrow with maturing trilineage hematopoiesis and no evidence of any lymphoproliferative disorder.

She was subsequently referred to radiation oncology, where she underwent involved-site radiation therapy to 36 Gy. All of her visual symptoms have subsided, and she is awaiting follow-up imaging.

ENMZL constitutes about 5% of all non-Hodgkin’s lymphomas. It is primarily a tumor of adults, with a slight female predominance. 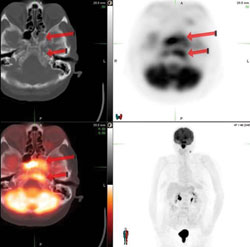 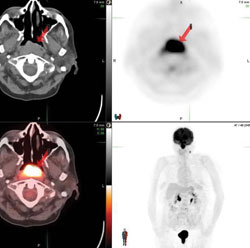 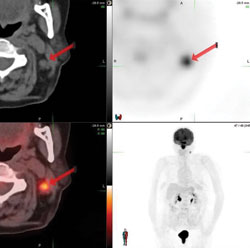 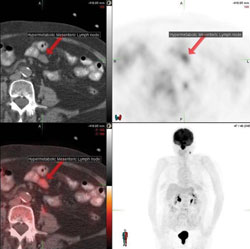 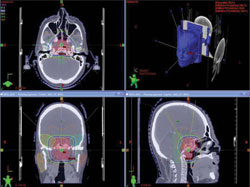 ENMZL is postulated to arise from post-germinal center memory B cells with the capacity to differentiate into marginal zone cells, and plasma cells. It has been associated with several translocations, including t(11;18) (q21;q21), and with chronic immune stimulation, often due to bacterial or autoimmune stimuli (eg, Helicobacter pylori, Chlamydia psittaci, Sjögren’s syndrome and Hashimoto’s thyroiditis).

One suggested pathogenic mechanism in ENMZL is that chronic inflammation leads to the local accumulation and proliferation of antigen-dependent B cells and T cells. With time, B-cell clones that still depend on antigen for growth and survival, bearing still unknown mutations, emerge. At this stage, the proliferation is monoclonal (and thus a tumor), but not yet able to spread beyond the site of inflammation. With acquisition of additional mutations, including the chromosome abnormalities cited above, the tumor becomes antigen-independent and capable of systemic spread.

The clinical presentation of ENMZL depends on the tissue involved. Patients can present with symptoms of abdominal pain, dyspepsia, heartburn, dry eyes, or with a mass at the site of involvement, as in our case here. Systemic “B symptoms” tend to be uncommon. The majority present with localized stage I or II extranodal disease. The stomach is the most frequent site of involvement, but this tumor can involve the lung, thyroid, breast, synovium, lacrimal and salivary glands, orbit, dura, skin and soft tissues.

These lymphomas disseminate to other MALT sites, lymph nodes or marrow in about 30% of cases. It had been thought that this was often a late event. However, increasing evidence suggests that disease may often be disseminated at diagnosis.

The diagnosis of ENMZL is made based upon morphologic, immunophenotypic and genetic analysis of biopsy material taken from an affected site. Morphologic review reveals a polymorphous infiltrate of small cells with reactive follicles. While large cells are typically present, they are by definition in the minority. On immunophenotype, cells are positive for B-cell markers CD19, CD20 and CD22, and negative for CD5, CD10 and CD23. Detection of a monoclonal immunoglobulin by flow cytometry or immunohistochemistry is helpful in confirming the neoplastic nature of the proliferation. Molecular diagnostic analysis consisting of polymerase chain reaction-based analysis of IgH gene rearrangements can also be very helpful in distinguishing extranodal MZL from reactive proliferations. Chromosomal abnormalities, usually trisomy 3 or t(11;18), are found in almost all cases and can be diagnostically helpful.

Locoregional radiotherapy with 25 Gy to 30 Gy is the principal therapy for most cases of limited-stage extranodal MALT. Surgery is typically used for diagnostic purposes only, but may play a role in the treatment of tumors in areas not conducive to radiation therapy (eg, lung). With this approach, rates of complete response and local control are in excess of 90%. The addition of adjuvant chemotherapy or antibiotic therapy has not demonstrated improved DFS or OS rates.

The treatment of patients with advanced-stage nongastric extranodal MZL is not clearly defined, and most data in this population come from retrospective series or extrapolation of data from other indolent NHL. This usually is in the form of immunotherapy (using rituximab [Rituxan, Genentech]), chemotherapy (eg, cladribine) or chemoimmunotherapy (incorporating rituximab with chemotherapeutic agents such as chlorambucil [Leukeran, Aspen Global]) alone, or cyclophosphamide, doxorubicin, vincristine and prednisone.

After the completion of therapy, patients usually are seen every 3 to 6 months to monitor for treatment complications and assess for possible relapse, which unfortunately is not uncommon.

Munir Ghesani, MD, is an attending radiologist at St. Luke’s-Roosevelt Hospital Center and Beth Israel Medical Center, an associate clinical professor of radiology at Columbia University College of Physicians and Surgeons, and a HemOnc Today Editorial Board member. He can be reached at Department of Radiology, Beth Israel Medical Center, First Avenue at 16th Street, New York, NY 10003; email: mghesani@chpnet.org.