A 38-year-old female with recurrent ependymoma

A 38-year-old woman with a history of ependymoma was referred to radiation oncology for further evaluation.

In 2006, she underwent a surgery in England to resect an intradural ependymoma. Follow-up imaging revealed that there was a nodule affixed to the cauda equina that had increased in size since her previous exam.

She moved to the United States and underwent an additional attempt at resection in August 2008, rendering a myxopapillary ependymoma histology. A neurogenic bladder, saddle anesthesia and left leg weakness resulted, and the patient required straight catheterizations henceforth.

Subsequent imaging in early 2009 revealed an enhancing lesion approximately 1.5 cm in breadth situated in the distal portion of the thecal sac. Cyberknife radiosurgery was performed mid-2009, and subsequent imaging demonstrated no change in the dimension of the mass.

In 2011, the patient delivered a healthy child without employing epidural anesthesia and was rather well without any additional symptomatology. Follow-up imaging in early 2012 revealed recurrence in the area of L2 that measured approximately 1 cm, with an additional nodule slightly caudad that measured 0.5 cm. Moreover, the thecal margin tumor had increased in size. 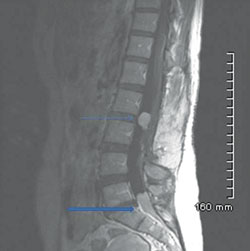 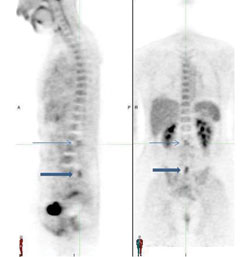 The patient was referred for assessment to a radiation oncologist. The patient was rather reluctant to undergo further surgery, and thus, the lesion was assessed regularly thereafter. Interval increase in size of lesions was noted in late 2012 (Figure 1). The patient underwent PET/CT examination (Figure 2), which confirmed the presence of these two lesions that were hypermetabolic.

Spinal ependymomas derive from neuro-ectoderm and are quite infrequent, with an estimated annual incidence of 2 to 4 per million. They occur slightly more frequently in men, and there is a bimodal age distribution, with incidence peaking at ages 5 and 35 years.

The fourth ventricle is a typical location, but intra-medullary and extra-medullary spinal locations of the tumor are quite well represented. The etiology is uncertain, with disparate reports of polyomavirus SV40 being complicit and/or altogether unrelated.

An increased incidence is noted in type 2 neurofibromatosis. WHO has refined a classification scheme of ependymomas into stages based upon features of aggressiveness and anaplasia. Myxopapillary ependymomas fall at the low-grade end of that spectrum and occur, almost without exception, in the conus-cauda region of the spinal cord. Glial fibrillary acidic protein expression is typical in this particular grade of lesion.

The presenting features may be vague and nebulous, tending to reflect the site of involvement as well as the size of the lesion. Enduring back pain and subtle to more severe motor and sensory deficits of the extremities are prototypical. The lesions are rather well delimited and enhance variably on MRI. Seeding is more common in high-grade infratentorial lesions; however, it is not unheard of in low-grade tumors. Anatomic location and grade dictate prognosis, with the former a rough surrogate for resectability; nonetheless, complete extirpation of the tumor is associated with the most favorable of outcomes.

Treatment is ideally surgical, and the role of other modalities is entertained when the residual disease is apparent or surgery is impractical. Eloquently situated tumors may be optimally debulked and various radiotherapeutic approaches may be attempted. Postoperative MRI can advise regarding the adequacy of resection and may even guide immediate re-operation in certain instances. Complete extirpation with preservation of function is largely achievable in up to half of patients with spinal cord tumors depending on the series; however, tumor residua or detrimental neurologic effects are well documented in even the most experienced of hands.

Radiotherapy can be delivered as a reasonable adjunct to surgery or as a standalone therapy, bearing in mind that there are no comparative randomized trials. Watchful waiting certainly is a valid approach, and reserving radiotherapy until progression or recrudescence is apparent may be more consistent with patients’ individual preferences.

Local recurrence is by far the most common manner in which treatment fails, but spinal seeding does occur, particularly in association with higher-grade lesions. Chemotherapy has no demonstrable benefit and is largely relegated to the domain of trials or palliative salvage. Stereotactic radiosurgery is another modality used in the recurrence setting, but it also may serve as frontline therapy.

Low-grade tumors tend to expand slowly over time, but they may be associated with significant morbidity depending on their localization. Surgery and radiotherapy are not without detriment and also may contribute to morbidity. Long-term follow-up is necessary, as eventual progression is the rule. Interval MRI is critical in that regard.