A 55-year-old woman with secondary polycythemia from uterine leiomyoma

A 55-year-old female with history of diabetes, hypertension, sickle cell trait and history of fibroid uterus presented to her primary care physician for preoperative evaluation to undergo hysterectomy.

She had a fibroid uterus for a long period of time and developed increasing lower abdominal discomfort a few months before presentation. Her gynecologist recommended hysterectomy because the discomfort was thought to be related to the large fibroid, causing mass effect in the pelvis.

During preoperative blood tests, her PCP noted very high hemoglobin level of 20.5 g/dL — corresponding to a hematocrit of 61.7% — and sought a hematology consult.

She did not have any other constitutional symptoms. Her family history was unremarkable. She smoked two to five cigarettes per day. Physical examination was unremarkable except for a vague lower abdominal mass arising from the pelvis. No hepatosplenomegaly or lymph node enlargements were noted. She had a pelvic ultrasound and MRI of the pelvis, which showed a 23 cm x 16 cm x 20 cm lesion consistent with fibroids (see Figures). 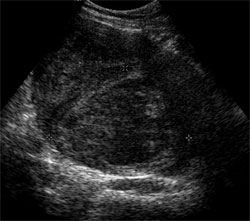 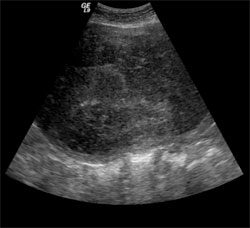 Figure 1. Left image: A sagittal ultrasound of the uterus in 2006 demonstrates a large posterior uterine leiomyoma (arrow). Right image: By 2012, the uterine leiomyoma has markedly enlarged and displaces the myometrium. 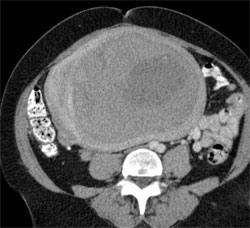 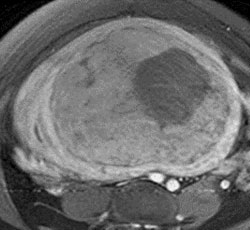 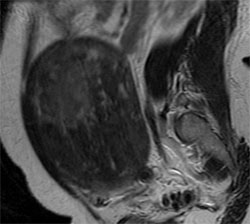 We sought a tentative diagnosis of secondary polycythemia, possibly caused by uterine fibroids. Her smoking history of two to five cigarettes a day was low on the differential but could be contributory. Smoking cessation counseling was offered.

Before planned hysterectomy, we recommended phlebotomy for a target hematocrit of about 55% or less to reduce the incidence of hematological complications. Her use of aspirin, which she started many years ago given her underlying diabetes and hypertension, was stopped 1 week before surgery. She underwent phlebotomies before surgery and underwent total abdominal hysterectomy at a hemoglobin level of 17.2 gm/dL and hematocrit of 54.2%.

Pathology revealed a 30 cm x 22 cm x 15 cm, well-circumscribed, pink-tan mass with spindle cell proliferation consistent with uterine leiomyoma. She had an uneventful perioperative course. Three weeks after surgery, her hemoglobin was 12.9 gm/dL and her serum erythropoietin level was 7.9 mIU/mL.

Secondary polycythemia can be caused by a variety of erythropoietin-producing renal lesions and cancers.

However, hypoxemia secondary to chronic pulmonary disease, sleep apnea, morbid obesity, cardiac shunts and high altitude also can cause physiological rise of hemoglobin levels to improve oxygen delivery to the tissues. Androgen use is another common cause of secondary polycythemia.

In a study published in Human Pathology in 2005, Pollio and colleagues suggested that the increased erythropoietin-receptor expression in the large uterine myomas in combination with erythropoietin could be the pathogenetic mechanism in the production of the unusually large tumor size.

Imaging cannot reliably differentiate between benign uterine leiomyoma and leiomyoma sarcoma. Although rapid growth rate has been associated with potential malignancy, recent studies have not substantiated this concept. Generally, leiomyomas present as an enlarged uterus with mass effect. Ultrasound will demonstrate a well-defined focal mass that is hypoechoic to myometrium, with blood flowing centripetally from the periphery with degeneration. However, the echotexture may appear heterogeneous.

On CT scan, leiomyomas appear homogenous to the uterus but may appear heterogeneous with hemorrhage, cystic degeneration, calcification or necrosis. On T1 weighted MRI images, leiomyomas will appear isointense to myometrium, with areas of high signal corresponding to blood products, and they appear hypointense on T2 weighted images. Areas of cystic degeneration will appear hyperintense on MRI images.

Preoperatively, most authors employ phlebotomy before surgery to decrease the incidence of possible hematological complications, such as excessive bleeding or thrombosis, although it is unclear if the risk of hematological complications is increased in secondary polycythemia. This is contrary to polycythemia vera, in which the risk for thrombosis and bleeding are increased with higher perioperative hemoglobin levels. However, there are some occasional case reports in which venous thrombosis has been reported with secondary polycythemia.

In conclusion, uterine myomas are a rare but not uncommon cause of erythrocytosis and should be considered in the differential diagnosis of secondary polycythemia. Diagnosis of the myomatous erythrocytosis syndrome should still be considered with normal serum erythropoietin levels, especially with levels closer to the high end of the normal values.

Rangaswamy Chintapatla, MD, is a fellow in hematology and oncology at St. Luke’s-Roosevelt Hospital Center.