A 67-year-old man presented to his primary care physician with progressive fatigue and a 20-lb weight loss in 2 months.

He did not have any other complaints at the time.

His physical examination was unremarkable. His blood work showed marked anemia with very low hemoglobin of about 8 g/dL (normal hemoglobin for males is about 13 g/dL to 16 g/dL). Further work-up revealed anemia of chronic disease.

Due to an episode of exertional chest pain, he was admitted to the hospital and underwent cardiac work-up that was unrevealing. Given his anemia, he underwent upper gastrointestinal endoscopy and colonoscopy, both of which were normal.

A bone marrow biopsy was performed to further evaluate his anemia of chronic disease. It showed a lambda light chain restricted mature B-cell neoplasm that was positive for CD10, CD19, CD20 and CD45, and negative for CD5.

He underwent a PET/CT scan, which showed few enlarged lymph nodes adjacent to the left pectoralis minor muscle with standard uptake value (SUV) of 7.6, and a mixed lytic/blastic malignant-appearing lesion in the left third rib suspicious for lymphoma or malignancy. Spleen was noted to be enlarged, with few focal areas of abnormal activity with an increased SUV of 6.2.

Given his constitutional symptoms, weight loss and anemia, the decision was made to begin chemotherapy. He was started on systemic chemotherapy with R-CVP (rituximab with cyclophosphamide, vincristine and prednisone). He received five cycles of the planned six cycles of chemotherapy. The sixth cycle of chemotherapy was held secondary to prolonged neutropenia for about 4 to 5 months. 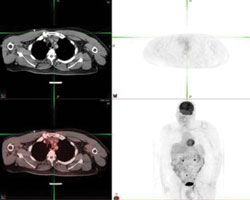 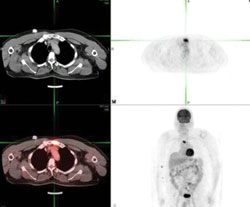 A PET/CT scan performed after the fourth cycle of chemotherapy showed no evidence of lymphoma. He underwent a repeat surveillance PET/CT scan 9 months after chemotherapy, and it showed a solitary area of uptake in the sternum with no other evidence of disease (see Figures 1 and 2).

Biopsy of the sternum revealed grade-2/grade-3 follicular lymphoma. He was planned for radiation therapy to the chest and will follow with rituximab maintenance. He is asymptomatic at this time and does not have any complaints.

Follicular lymphoma is an indolent lymphoma with a relapsing and remitting pattern. It accounts for approximately 20% of non-Hodgkin’s lymphoma.

Follicular lymphoma arises from germinal center B cells of lymphoid follicles. Most common chromosome abnormality is a translocation involving chromosomes 14 and 18 with overexpression of an oncogene BCL-2, located on chromosome 18, which induces resistance to apoptosis.

WHO classification divides follicular lymphoma based on the number of centroblasts/high-power field (HPF).

Management of asymptomatic WHO grade-1 and grade-2 follicular lymphoma is controversial.

The data are based on retrospective studies and three large randomized trials that compared observation with early treatment of asymptomatic patients. The data showed similar OS and similar transformation to aggressive lymphomas.

In this setting, treatment is usually employed for bulky or symptomatic disease. Generally, WHO grade-3 follicular lymphoma is considered aggressive and is treated in a similar fashion as diffuse large B-cell lymphoma.

Some of the common chemotherapy regimens employed for treatment of follicular lymphomas include R-CVP, R-CHOP, bendamustine (Treanda, Cephalon) and rituximab (Rituxan, Genentech), and fludarabine-based treatments.

Radioimmunotherapy with agents such as ibritumomab (Zevalin, Spectrum Pharmaceuticals) and tositumomab (Bexxar, SmithKline Beecham) have demonstrated efficacy in relapsed or refractory follicular lymphoma and are usually employed in the relapsed setting. Maintenance therapy with rituximab, given after completion of chemotherapy once every 2 months for a period of 2 years, is shown to improve PFS but not OS.

Overall, follicular lymphoma is an indolent lymphoma. More than half of patients achieve good initial response to chemotherapy, with eventual progression of the disease occurring in most patients.