IBD treatment plan ‘needs to be a continuous conversation’

Despite progress in treatment for inflammatory bowel disease, patients and providers reported differing expectations as to remission and other aspects of disease control in a recent global survey, as presented in a poster during the 2020 Congress of the European Crohn’s and Colitis Organisation.

“For me personally, it was really eye opening to see the differences from a physician perspective and the patient perspective on certain aspects,” Anita Afzali, MD, of The Ohio State University, told Healio Gastroenterology and Liver Disease. “There was a clear disconnect.”

The online survey, which was conducted from August to November 2019 in the U.S., Canada, France, Germany, Italy, Spain and the United Kingdom, included responses from 2,398 patients with ulcerative colitis or Crohn’s disease and 654 gastroenterologists.

Steroid use in IBD

One area of concern is the high prevalence of corticosteroid use among patients with IBD and possible passive acceptance thereof by physicians, Afzali said. The survey results showed 35% of patients with Crohn’s and 39% of those with UC used corticosteroids for 4 months or longer in the past year. Physicians reported that this is expected in more than 40% of their patients.

“Our therapies at present are ‘good enough’ but that doesn’t mean we should allow 40% of health care professionals to feel that giving steroids for 4 months is just how it is,” Afzali said. “Our prescribing habits should still be cognizant of the fact that we must do diligence of finding the appropriate therapy for our patients that is steroid sparing. ... This survey highlights that 40% of health care professionals don’t find it concerning that we have our patients on 4 months steroids per year. Steroids are bad and we need to have our patients on steroid sparing options.” 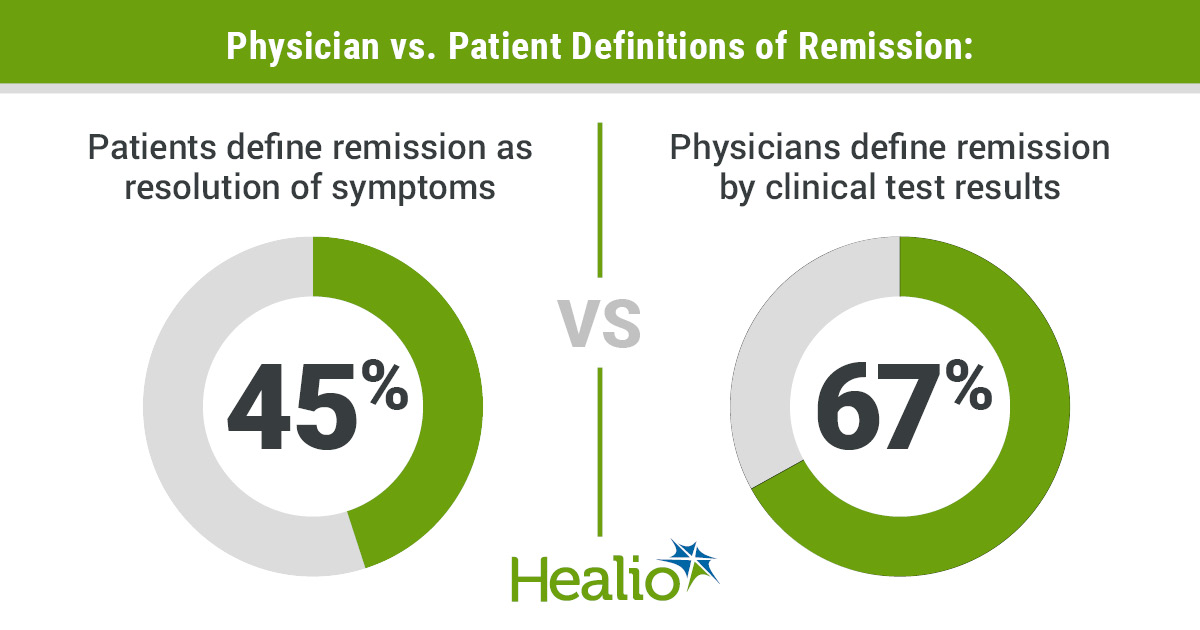 Despite progress in treatment for inflammatory bowel disease, patients and providers reported differing expectations as to remission and other aspects of disease control in a recent global survey.

“Oftentimes, patients may have concerns about their prescriptions, including steroids but they aren’t always brought up by the provider,” Afzali said. “Patients expressed greater concern about steroid use than their physician. ... That was very telling.”

Afzali explained that physicians must recognize and define what these symptoms are if they are the focus of the patient, communicating to the patient what may or may not be within reach. She mentioned that some of the components of patient symptoms may be related to active disease, but it also could be related to anxiety, depression or underlying irritable bowel syndrome.

“Other factors may not improve unless we also pay attention to those components,” she said. “It really highlights the importance of communication and, in advance, shared decision making on understanding what our goals and targets are for managing their disease.”

Additionally, physician responses indicated that up to 63% of patients with IBD will not achieve remission with current therapies yet 25% of physicians treating Crohn’s and 36% of those treating UC reported being ‘highly satisfied’ with the results. Average sustained response expected by physicians was 1 to 2 years.

“The perspective here is that health care practitioners are seeing this as ‘good enough’,” Afzali said. “We obviously can do better and we should do better, recognizing that the reality is at present even with the current medical therapies we have available, we still are not achieving remission – true objective, endoscopic mucosal healing deep remission – for all of our patients.”

Patients, however, believe remission is a feasible treatment goal and a third of patients expect disease control for 5 years or longer. Yet 61% of patients in the survey reported only partial control of their own IBD.

“It re-highlights the importance of communication and defining what treatment goals should be in advance and emphasizing that this should be re-reviewed throughout one’s journey with this disease instead of just at the beginning or never. It needs to be a continuous conversation,” Afzali said. “Take into account that symptoms are very important, and it’s commonly reported by our patients and those symptoms need to be addressed, including anxiety, depression and fatigue. It seems like we are dismissing it, but the patient’s voice is asking for these symptoms to be addressed and they are defining their remission on these symptoms.” – by Katrina Altersitz

Disclosures: Afzali reports acting as a consultant for AbbVie, Celgene, Janssen, Takeda and UCB; and receiving speaker fees from AbbVie, Janssen, Pfizer, Takeda and UCB. This survey was supported by Bristol Myers Squibb.