Screening rates for colorectal cancer have increased over the last decade, according to data published in Clinical Gastroenterology and Hepatology. However, researchers found that despite this uptick, disparities in screening rates persist among racial and ethnic minority groups.

Study author Folasade (Fola) P. May, MD, PhD, of the Tamar and Vatche Manoukin Division of Digestive Diseases at the University of California, Los Angeles, provided Healio Gastroenterology and Liver Disease with some insight into the study, highlighted some of the issues driving the disparity and offered some potential strategies to help bridge the gap. – by Alex Young

Healio: What do you think is important to note about the study?

May: First, we showed that the overall colorectal screening rate increased from 61% in 2008 to 68% in 2016. It is great to see improvement, but the rate remains suboptimal and well below the national goal of 80%.

Second, we showed that rates remain highest among white people and lowest in Hispanic people in the United States. The difference between these two groups was 17% at the end of the study period, which is a very large difference. 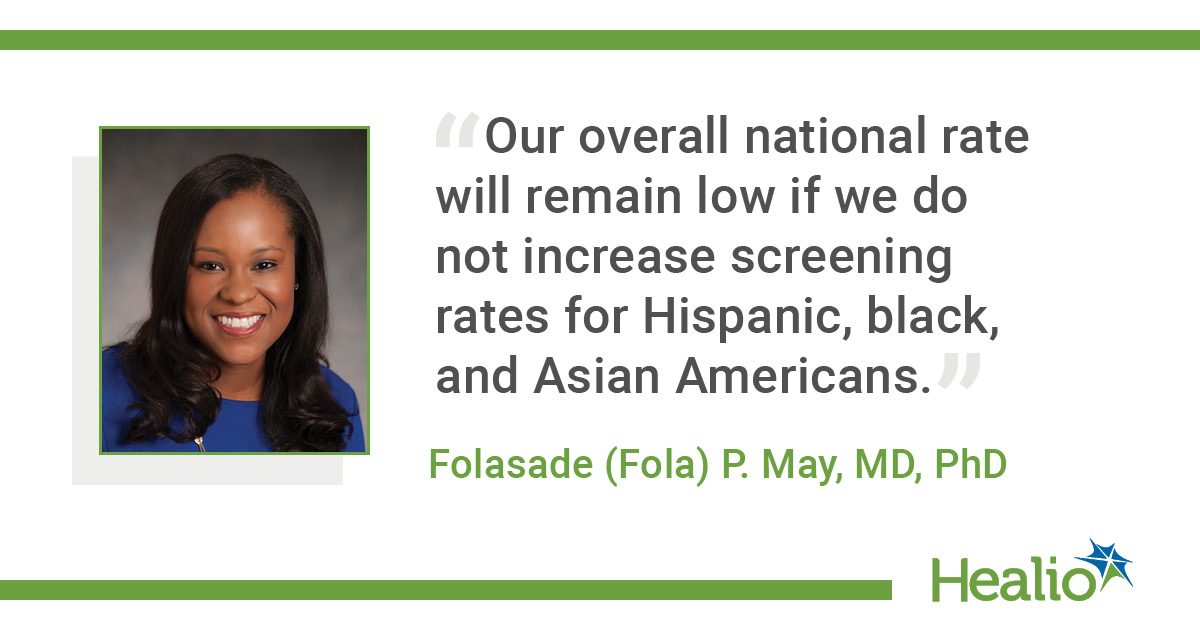 Screening rates for colorectal cancer have increased over the last decade, according to data published in Clinical Gastroenterology and Hepatology. However, researchers found that despite this uptick, disparities in screening rates persist among racial and ethnic minority groups.

We also showed that screening rates increased annually from 2008 to 2016 for individuals who are white, Hispanic or Asian. Black people did not see a steady increase over time.

Finally, we saw that although there are many different tests that we can use for screening, colonoscopy remains the most popular by far.

Although CRC screening rates have improved overall since 2008, they have increased disproportionately for each racial/ethnic group, and disparities in screening uptake persist.

Healio: What policy changes and/or campaigns have led to an increase in CRC screening uptake since 2008?

May: In 2010, the implementation of the Patient Protection and Affordable Care Act (ACA) eliminated cost-sharing for preventive services with strong clinical evidence (USPSTF grade A, B). Thus, CRC screening became a free service without copays or deductibles. This remains the case today. Additionally, Medicare also covers screening so that enrollees do not need to pay out of pocket. Lastly, Medicaid expansion, which started in 2014, also increased access to screening as it allowed individuals with low income to have access to free screening. States are authorized to cover colorectal screening under their Medicaid programs for low income individuals. There are also financial incentives for health systems with high screening rates.

There have been a few important campaigns that have also contributed to the uptick in screening.

The Katie Couric effect was probably one of the early public awareness events. She brought national attention to CRC risk and screening in 2000 when she underwent colonoscopy on live TV.

The 80% in Every Community campaign was also launched by the National Colorectal Cancer Roundtable to increase awareness and get national rates up to 80%. We are currently at 67% to71%, so we have a way to go. This campaign has been very active and is now focusing on increasing screening rates in underserved communities that are predominantly Hispanic and African-American.

Health systems and organizations also engage in campaigns to spread awareness, usually in March when we have CRC awareness month.

Healio: What are the barriers that seem to be causing the disparity among some racial/ethnic groups?

May: There are some specific barriers that we see among minority groups. There are patient barriers to screening that include lack of knowledge about CRC risk, lack of knowledge of CRC screening, language barriers, health literacy, mistrust of the health care system, low tendency to use primary care, low insurance rates (which is a problem because low-income individuals need insurance to pay for the screening), aversion to the colonoscopy procedure, fear of a cancer diagnosis and inability to take time off to do the colonoscopy.

There are also provider barriers. Doctors don't always recommend screening. In some clinical settings, there is a lack of resources or providers are faced with providing care for many medical problems in short visits with minimal time to discuss screening. Providers may also not perceive that screening is a high priority to a person from a minority group.

Lastly, there are system-level barriers. Many patients from minority groups receive medical care in federally qualified health centers where there are limited resources, no gastroenterologists on site to do a colonoscopy and competing health priorities. These concerns are being addressed more and more with increased attention and funding to improve screening in these community health centers.

Healio: How do the disparities among some racial/ethnic groups effect national screening goals?

May: This is a very important point. We will not be able to achieve high overall screening rates as a nation until we target and increase screening in the communities with the lowest screening rates.

For example, we can achieve a screening rate of 90% among white Americans, however, our overall national rate will remain low if we do not increase screening rates for Hispanic, black, and Asian Americans. Thus, one of the things that our group stresses is that we can only meet our national goals if we take care of everyone and focus on those that need the most help to increase participation in screening.

Healio: What are some potential strategies to improve screening rates in those communities?

May: Strategies have focused on patients, on providers and on improving the health care system.

For patient strategies, we want to increase knowledge, invite for screening, provide educational videos, send letters and reminders, as well as use culturally tailored information provided by the American Cancer Society and other organizations.

We need to provide feedback to providers about how often they are recommending screening, teach cultural competency so that providers understand some of the barriers specific to minority patients and use less invasive screening tests like the fecal immunochemical test (FIT) because patients are more likely to do them than colonoscopy.

Many health systems have allocated resources to make changes in the electronic health record. These changes make it easier to document when a patient is due for screening and to send reminders to providers and patients about screening. Several health systems have programs that mail FIT kits to patients so they can complete the screening in the comfort of their own home.

The best interventions are the ones that address some patient, provider and system-level barriers. The barriers vary by health care system, so it is important to tailor the effort to the specific challenges in the population you are trying to help.