Cannabinoid hyperemesis syndrome is a condition experienced by chronic marijuana users who develop symptoms like nausea, vomiting and abdominal pain, which are characteristically relieved by hot showers.

In a study published in Basic & Clinical Pharmacology & Toxicology, Joseph Habboushe, MD, MBA, assistant professor of emergency medicine at New York University School of Medicine/Bellevue and cofounder of the medical reference MDCalc, wrote that the syndrome might be much more prevalent than previously thought.

Using a survey administered to 155 patients at a public hospital emergency department who reported smoking marijuana at least 20 times per month, Habboushe and colleagues found that 32.9% of the patients (95% CI, 25.5–40.3) met criteria for having cannabinoid hyperemesis syndrome (CHS). Extrapolating that figure to the general population could mean approximately 2.75 million Americans suffer from CHS annually, they wrote.

Healio Gastroenterology and Liver Disease spoke with Habboushe about CHS and what practicing gastroenterologists need to know about this emerging condition.

Healio: What is CHS? What are the symptoms?

Habboushe: Cannabinoid hyperemesis syndrome is a paradoxical phenomenon that affects chronic heavy cannabis users. Patients develop bouts of nausea, vomiting and abdominal pain that they don’t associate with their marijuana consumption, as they usually have been smoking for years. However, they often discover that hot showers relieve the symptoms. In severe cases, patients have been known to spend 6 or more hours a day in the hot shower.

This increases their chances of dehydration and acute renal failure due to a combination of sweating in the shower and vomiting. The symptoms are typically refractory to antiemetics, with some reports that haloperidol is somewhat effective. However, hot showers and capsaicin cream both seem to help symptoms in the short term, and the only known definitive treatment is marijuana cessation, after which symptoms will resolve in days to weeks. Unfortunately, the phenomenon will quickly recur if the patient starts consuming cannabis again. 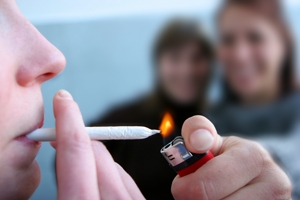 Healio: What are the underlying causes of CHS?

Habboushe: We do not know for sure. We know it is associated with heavy, chronic cannabis use, and my recent study has shown that about 1 in 3 daily or near daily (20 days per month, self-reported) users develop at least some symptoms of CHS.

Healio: Is there a link between increased legalization/decriminalization and higher prevalence of CHS?

Habboushe: Yes – a study by Kim et al, demonstrated an approximate doubling of cyclic vomiting syndrome cases in Colorado after their first liberalization/pseudo-legalization in 2009. As CHS was not well recognized, it was probably being labeled as cyclic vomiting syndrome by clinicians. Anecdotally, emergency physicians and GIs have reported a higher prevalence in the past few years. Still, our recent study, which estimated a U.S. prevalence of 2.75 million, blew our socks off.

Healio: Why are hot showers an effective relief?

Habboushe: We believe this is mediated through the cutaneous TRPV-1 receptor, which is agonized specifically by very hot water — patients report requiring scalding water — and capsaicin, which has been shown to temporarily relieve symptoms.

Healio: Were you surprised to discover how many people this condition affects?

Habboushe: I had suspected CHS was underdiagnosed. It was reported as “rare” and “very rare” in the literature without supporting evidence, and anecdotally I know so many patients who had undergone misdiagnosis for years. Some lost their jobs, went bankrupt from so much health care consumption with extensive imaging and testing, and a few even underwent cholecystectomies and appendectomies. But we never expected our estimates to go into the millions (and – our extrapolation was based on 2014 national usage data – it's likely now well over 3 million patients given the recent increase in marijuana use.)

Healio: What is the clinical significance of your findings to practicing gastroenterologists?

You can diagnose them symptomatically, and then just check a basic metabolic panel to confirm they do not have acute renal failure. A paper we published a few years ago showed a high rate of acute renal dysfunction, likely due to sweating during the hot showers.

Your biggest challenge will be patients who are in denial that their syndrome is related to marijuana, or otherwise have trouble quitting. Currently the treatment requires a significant amount of reassurance, of convincing the patient of the reason for their disease and support in quitting their chronic habit. This is a true test of bedside manner and patient communication.

Healio: What are the next steps of your research?

Habboushe: We are working on developing several potential treatments, as well as preventive approaches, including medical marijuana products that do not lead to CHS.