Patients with a history of bariatric surgery showed an increased risk for developing new-onset inflammatory bowel disease, according to new research published in Alimentary Pharmacology & Therapeutics.

However, investigators emphasized that this potential risk does not outweigh the overall benefits of bariatric surgery but could provide new insight into the pathogenesis of IBD.

“While we do not think our findings should at all discourage or take away from the health benefits of bariatric surgery, since the absolute risk of developing IBD following bariatric surgery remains extremely small, we think this association highlights potential disease mechanisms and the need to carefully evaluate new gastrointestinal symptoms in patients with prior weight loss surgery,” Jean-Frederic Colombel, MD, of the division of gastroenterology at the Icahn School of Medicine at Mount Sinai, said in a press release.

Colombel and colleagues conducted a multi-institutional case series using data from three institutions of the New York Crohn’s and Colitis Organization and three European centers. They identified 15 cases of IBD with a prior history of bariatric surgery, mostly Roux-en-Y gastroenterostomy. Ten of the patients had Crohn’s disease, four had ulcerative colitis, one had unclassified IBD, and the average time between surgery and IBD diagnosis was 5.7 years. 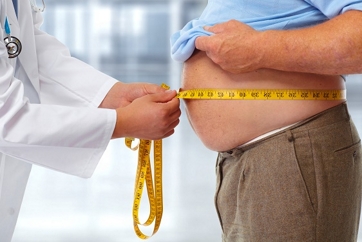 The researchers then conducted a matched case-control study using medical and pharmacy claims from 2008 to 2012. A total of 8,980 cases and 43,059 matched controls were included in the analysis.

The investigators said the reason for the heightened risk for IBD was unclear, but alterations in the microbiome following surgery could explain the increase.

They noted that additional research is needed to confirm the association and determine if certain types of bariatric surgery have different effects on subsequent IBD risk. – by Alex Young

Our group published a similar article in the Journal of Crohn’s and Colitis prior to this publication.

We further looked at the incidence of IBD in patients who underwent bariatric surgery in a prospective database of bariatric surgery patients maintained at the Mayo Clinic where this was noted to be 26.7 per 100,000 person-years (4.5 for UC and 22.3 for Crohn’s disease). The age-adjusted standardized incidence ratio (SIR) ranged from 3.56 in the age 40 to 49 years group to 4.73 in the age 30 to 39 years group.

This study by Ungaro et al. and our study suggest that IBD should be considered in the differential diagnosis of delayed onset of worsening diarrhea or new/worsening abdominal pain in patients with a history of bariatric surgery. The reasons for the increased risk for IBD may be due to changes in microbiome although that is speculative and needs to be proven in prospective studies in patients undergoing bariatric surgery and followed over time.

The second factor here could be obesity. Obesity is considered a chronic low-grade inflammatory process mediated by pro-inflammatory cytokines, such as TNF-alpha and interleukin-6, as well as adipokines such as leptin and resistin secreted by adipocytes or macrophages. Although obesity has been associated with increased disease activity of several autoimmune conditions such as rheumatoid arthritis and psoriasis, this association has not been consistently demonstrated in IBD. Finally, despite this association with IBD, bariatric surgery remains a safe and reliable option for significant weight loss especially in medically complicated obesity.

Bariatric surgery is effective at reducing weight and metabolic disease in patients with obesity. Concerns remain about long-term adverse events, reported to occur in 17% to 40% of patients. Two recent studies, one from Mayo Clinic and one from the New York Crohn’s and Colitis Organization (NYCCO) and collaborators, describe possible association of bariatric surgery and an increased incidence of inflammatory bowel disease (IBD).

In the latter study by Ungaro et al, six medical centers including three in New York, and three in Europe, reviewed their health records to identify patients with a new diagnosis of IBD after bariatric surgery. The study authors also queried a large insurance claims database of 190 million patient records, for incidence of IBD and past history of bariatric surgery. Intriguingly, bariatric surgery performed more than 4 years prior was associated with increased risk for new-onset IBD (OR = 1.79; 95% CI, 1.24-2.6), while controlling for age, obesity, cholecystectomy, and other relevant confounders.

Some potential mechanisms may be related to alteration of gut anatomy with resultant dysbiosis. In fact, studies have shown some alterations in gut bacteria after Roux-en-Y gastric bypass that resemble those of patients with IBD. Other possible contributors may be malabsorption of certain micronutrients, such as vitamin D, which is often present both before and after bariatric surgery, and which has also been linked to IBD development and disease activity. While the etiology of IBD is still unclear, the study results do suggest that changes in the intestinal environment, such as the gut microbiome, may drive disease rather than merely being a secondary effect of IBD development. However, direct cause-effect relationship between bariatric surgery and IBD has not been established.

The reader should interpret with caution findings from retrospective analysis of large databases. For example, obesity is a risk factor for total knee arthroplasty; however, claims are rarely submitted with this diagnosis. Most patients with history of bariatric surgery would still meet criteria for obesity, but the diagnosis may not have been used in claims. A surgical procedure is much more likely to be coded. Thus, it may be obesity actually driving the new incidence of IBD in the bariatric surgery cohort, or weight regain after bariatric surgery leading to obesity. Until more prospective data are available, we would advise our patients with obesity to lose weight by guidelines, and FDA-approved methods if they want to decrease their future risk for IBD. But we will inform patients planning bariatric surgery who have risk factors for IBD about the results of this very relevant study

Lea Ann Chen, MD, of the division of gastroenterology at NYU Langone, contributed to this perspective.