Raza Hasan, MD, is a current resident at Thomas Jefferson University Hospital. He plans to pursue a career in gastroenterology at the completion of his residency. Hasan has research and publications in pancreatic cancer and advanced endoscopic techniques. Furthermore, he has received a degree in International Medicine & Public Health and is interested in international medicine.

Patient is a 19-year-old African-American female with cryptogenic cirrhosis complicated by esophageal varices (grade 1) and portal hypertensive gastropathy who presents with lower GI bleed. The patient’s past medical history is significant for history of prematurity with cerebral palsy, seizure disorder, short gut syndrome with bowel resection, factor V deficiency, asthma and ADHD. Patient was born prematurely at 28 weeks, suffering from necrotizing enterocolitis. She was, at the time, placed on nil-per-os and chronic total parenteral nutrition for 5 to 6 months. Consequently, patient developed cholestasis with cirrhosis as a newborn; a liver biopsy at 7 months demonstrated cirrhosis.

The patient initially had experienced lightheadedness and presyncope after having a large bloody bowel movement at her house. Subsequently, she presented to the emergency room with mild lower abdominal cramping, but no further episodes of hematochezia or melena. Additionally, she denied fevers, chills, nausea, vomiting and dysuria at that time.

On admission, patient hemoglobin was 7.2, which later dropped to 5.7, down from her baseline of 13.4. She had a diffuse tender abdominal exam, however no evidence of rebound tenderness or rigidity. She also had normoactive bowel sounds with no distension. She was given 2 units of packed red blood cells and was resuscitated with IV fluids. At the time, her vitals were stable.

She was then transferred to Thomas Jefferson Hospital where a nasogastric lavage showed no active bleed, but following the lavage patient had another large bloody bowel movement and was transferred to Medical ICU with concern for a variceal bleed. Patient was emergently intubated for airway protection and had a EGD which showed no active bleed. A rectal exam demonstrated blood in the rectal vault. A CT abdomen and pelvis showed large varices in the right lower quadrant. 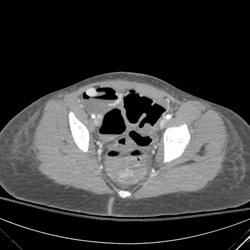 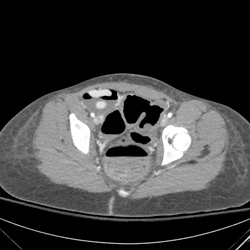 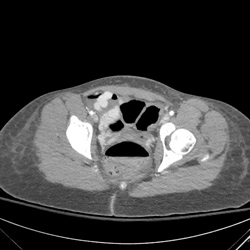 Figures 1, 2, and 3: A large, tortuous varix in the right lower quadrant, extending from the superior mesenteric vein and collateralizing with the internal iliac venous system

Question: What is the diagnosis?

Colonic varices have been rarely reported in literature — less than 100 total cases. Most varices are esophageal or gastric; however, those outside these regions are termed ectopic varices. In recent studies, out of 169 patients with evidence of ectopic varices causing variceal bleeding, 17% were duodenal varices, 17% were jejunal or ileal varices, 14% were colonic varices and 9% were rectal varices. These varices usually present with cases of hematochezia or hematemesis. Therefore, bleeding ectopic varices should be suspected in all patients with portal hypertension. For early identification of the problem and location of bleed can help in resuscitating and treating the patient.

Colonic varices are usually caused by portal hypertension, an increased pressure in the portal venous systems. With cirrhotic livers, there is an increased hepatic vascular resistance due to the architectural destruction of the hepatocytes, along with active contraction of myofibroblasts and vascular smooth-muscle cells of the intrahepatic veins. This scarred hepatic tissue blocks the flow of blood through the liver, creating an increased backflow pressure into the portal venous system. When the increased portal venous pressures exceed the inferior vena caval pressure, the collateral veins collapse, creating engorged submucosal vessels called varices. Specifically, when the pressure gradient between the portal and hepatic veins exceed 12 mmHg, varices begin to form.

Typically, a GI bleed will initiate diagnostic testing to evaluate the sources. Most often, varices are seen on EGD for esophageal or gastric varices. Colonoscopies are better at evaluating ectopic varices, especially colonic and rectal varices. Furthermore, MR angiography looks at the portosystemic collateral circulation. Rarely can a CT abdomen and pelvis identify thickened colonic wall with scalloped appearance indicating possibilities of colonic varices. During a colonoscopy, the risk of variceal bleeding can be evaluated by looking for “red signs” which signify a higher risk of hemorrhage. These red signs include appearance of red longitudinal streaks on the varices, discrete cherry red spots, raised spots overlying the varices like a blood blister, and diffuse erythema surrounding varices. Furthermore, degree of liver dysfunction per the Child-Pugh Classification and history of previous variceal bleed predicts a higher likelihood of variceal hemorrhage.

Prevention of variceal bleeds can be performed medically or via endoscopic intervention. With patients with Child A cirrhosis who have small varices with the above mentioned red signs or patients with Child B or C cirrhosis, treatment of choice is a nonselective beta blocker, such as propranolol and nadolol. These medications block the dilatation of the mesenteric arterioles, allowing for unopposed alpha-mediated vasoconstriction and resulting decreased portal blood flow. Furthermore, if larger varices are noted, preventative therapy is endoscopic variceal ligation.

Treatment of esophageal and gastric varices has long been established as endoscopic injection sclerotherapy, endoscopic band ligation and balloon-occluded retrograde transvenous obliteration. However, treatment of ectopic varices is much less-defined because endoscopic treatment modalities is often unsuccessful. According to the American Association for the Study of Liver Diseases, treatment for ectopic varices is the transjugular intrahepatic portosystemic shunt (TIPS) procedure. This procedure primarily connects the inflow portal vein and the outflow hepatic vein. This allows a decreased pressure in the portal venous system and decreases the pressure causing engorged varices. By creating this collateral circulation between portal system and systemic venous, there is less vascular resistance in the liver and decreased congestive pressures in the portal veins, preventing future bleeds.

Management of our patient 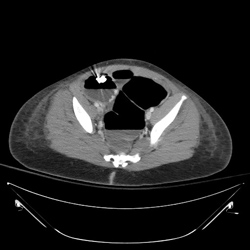 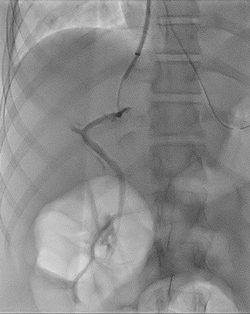 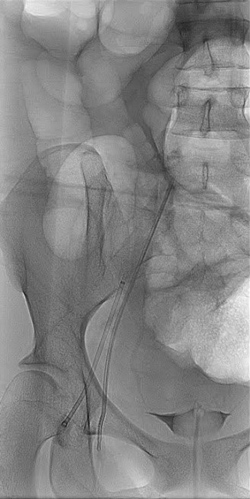 Patients with portal hypertension secondary to cirrhosis should always be suspected of having ectopic varices in setting of a gastrointestinal bleed. When there is a variceal hemorrhage from ectopic varices, there is massive bleeding and can develop into rapid hypovolemic shock. Resuscitation and source control is crucial in this setting. Identifying the location of the varices and providing adequate management is necessary in preventing shock and death.