Richard M. Wu, MD, MPH, graduated with a BA from University of California, Berkeley. He earned his MD from Drexel University College of Medicine in 2009. He also earned his Masters of Public Health in 2007 at Drexel University School of Public Health. He then completed his residency in Internal Medicine at Duke University Health Systems. Wu will be completing his fellowship in gastroenterology and hepatology at Thomas Jefferson University Hospital. Wu will be joining the University of Pennsylvania faculty as Assistant Professor of Clinical Medicine at the Philadelphia Veterans Affairs Medical Center. His clinical interests include general gastroenterology, colon cancer screening, small bowel diseases, celiac disease, occult gastrointestinal bleeding, video-capsule endoscopy, deep enteroscopy, and health care policy.

A 56 year old Caucasian woman presents for further gastroenterology evaluation of 9 months of mid abdominal pain, bloating and diarrhea that has not fully resolved. During her initial presentation, she initially was given an empiric trial of dicylcomine with improvement in pain. Subsequently, she presented to an emergency room due to abdominal pain, where a CT scan was done. The CT showed numerous mesenteric adenopathy, more numerous in the upper mesentery, but larger in size in the inferior mesentery with lymph nodes measuring up to 2.6 cm.

On physical exam she appeared thin with a BMI of 19.4. Her physical exam and vital signs were otherwise unremarkable with a normal abdominal, skin and lymph node exam.

She was referred to a gastroenterologist and her initial CT was reviewed and a left lower quadrant small bowel intussusception was suspected. Repeat imaging was performed with an MR Enterography which showed mesenteric adenopathy without intussusception or small bowel thickening. Her labs showed tissue transglutaminase IgA is greater than 100 units. Deaminated gliadin IgA and IgG were both >100 units. An EGD showed a hiatal hernia, small gastric polyps (hyperplastic on biopsy), duodenal lipoma, and scalloped duodenal mucosa in the duodenum with a macroscopically normal duodenal bulb. Colonoscopy with ileoscopy was normal including negative random biopsies. Path showed total villous blunting with atrophy in the second and third portion of the duodenum. The stomach antrum biopsy revealed lymphocytic gastritis without H. Pylori or intestinal metaplasia.

She was given the diagnosis of celiac disease and met with a nutritionist and started on a gluten free diet (GFD). Six months after her initial presentation she presents for a second opinion as she is on strict GFD but still has substantial bloating, flatus, eructation and occasional nausea. Her cramping improved and she gained 5 lbs since starting GFD. She has about three formed bowel movements a day but ranges from 0-7/day. She has occasional night sweats since her menopause. She denies melena, hematochezia, rashes or joint pain.

Her liver function test and Chem 7 is normal. Hemoglobin 12.1, MCV 88, WBC 7.9 and otherwise normal CBC. Stool culture and Clostridium difficile is negative. H. Pylori IgG is negative. She is not IgA deficient.

A video capsule endoscopy was performed:

Proximal Jejunum mucosal atrophy and scalloping (Figure 1) that transitions to normal villous pattern at 2 hrs. Extrinsic bulges without mucosal ulcerations (Figure 2,3) were seen in the distal jejunum at 65% of capsule time. This was a possible leading edge of the prior intussusception on CT. The proximal ileum had multiple lymphoid hyperplasia (Figure 4) that was more proximal than typical. 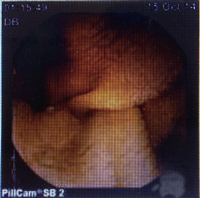 Figure 2.  Extrinsic bulges encompassing greater than half the lumen in the distal SB. 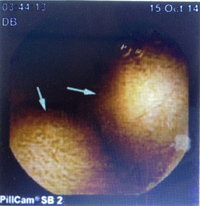 Figure 3.  Extrinsic bulges encompassing greater than half the lumen in the distal SB 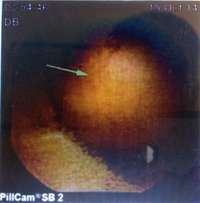 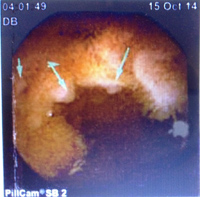 Due to the patient’s persistent symptoms and VCE findings, the patient was referred for an anterograde Spirus Enteroscopy.

Spirus Enteroscopy: In the duodenum and jejunum there were diffuse granular, nodular mucosa that is flatten and atrophic with macroscopic fissures (Figure5).  More distal in the jejunum there were multiple small mucosal erosions with mild surrounding erythema (Figure 6 & 7) that were biopsied. No masses were seen. The proximal ileum appeared normal and an endoscopic tattoo was placed.

Figure 5. Flatten and atrophic mucosa with fissures in the duodenum and jejunum 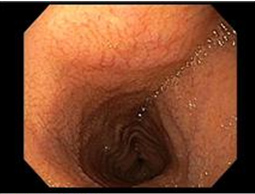 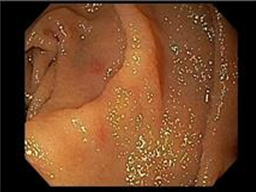 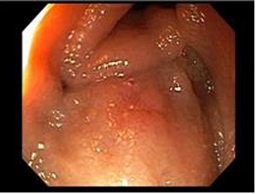 The jejunum erosions had patchy active enteritis with focal mucosal erosions. There were inflammatory cells in the lamina propria and infiltrating adjacent crypt epithelium. The random biopsies in both the jejunum and ileum showed significant diffuse increased intraepithelial lymphocytes consistent with lymphocytic enteritis. The villous architecture was mostly preserved.

The lymphocytes were small, round without atypia. They were CD3+, CD7 + (T Cell markers), CD 8 + (cytotoxic T cell marker), CD 4 negative (helper T cell marker) and CD 30 and 56 negative. There were no signs of Enteropathy-associated T-cell lymphoma. This was consistent with lymphocytic enteritis as seen in celiac sprue.

Question:  What is the diagnosis? Why is this patient still having persistent symptoms?

There are multiple causes of poorly responsive celiac disease with villous atrophy that needs to be considered in the evaluation of this patient (Table 1).  HLA haplotyping often is helpful to fully rule out patients that are not HLA DQ2 or 8, thus being incompatible with the diagnosis of celiac disease. The most concerning differential to fully rule out in these cases are ulcerative jejunitis, and malignancy in the form of adenocarcinoma, non-Hodgkin lymphoma (NNL), and Enterocyte associated T Cell Lymphoma.

In refractory celiac disease the symptoms commonly include persistent diarrhea and/or steatorrhea, often greater than a liter of stool a day. There can also be associated abdominal pain, weight loss, fatigue and malaise. Labs can reveal anemia, abnormal liver function testing, and multiple vitamin deficiencies. It is important to note that even in patients strictly adherent to GFD, up to 30% can still have CD specific serology, which is thought to be related to antibody kinetics and other inflammation upregulating tissue transglutaminase production. The other caveat is that negative CD specific serologies do not exclude RCD. The lymphocytic gastritis that was seen on biopsy is has an association with CD. In RCD, the aberrant intraepithelial lymphocytes can infiltrate the stomach via vascular circulation.

There are two types of RCD. Type 1 RCD has no IEL atypia and is overall associated with minimal increased risk of malignancy. It is typically indistinguishable from uncomplicated active celiac disease except that its disease course is autonomous to a GFD.

Type 2 RCD, on the other hand, a majority exhibits clonal expansion of an aberrant IEL population and loss of classic T cell surface markers such as CD8, CD4, and TCRαβ. This is a more severe type and predisposes the patient to increase risk of Enteropathy-associated T-cell lymphoma, NHL, and ulcerative jejunitis. The overall survival for RCD type 2 is poor, with a 53% 5 year survival mostly due to severe malnutrition and high risk of lymphoma.

The diagnosis of RCD hinges on immunohistochemistry, molecular biology, and flow cytometry findings. The T cell receptors can be seen to undergo a monoclonal rearrangement in RCD.

Treatment and management of RCD requires a combination of aggressive nutritional support/hydration, and immunosuppression.  Up to 60% of these patients will require total parenteral nutrition. Care has to be taken in the management of trace mineral deficiencies and metabolic bone disease as well. Although no randomized controlled studies exist, Prednisone dosed at 0.5-1 mg/kg is the most common medication used and 75% of patients demonstrate clinical response. Other medications used include budesonide, prednisone in combination with azathioprine, mesalamine, cyclosporine, and anti-TNF alpha inhibitors. Autologous stem cell transplant has also been performed for RCD. Surgical consultation is needed in complicated RCD in the cases of perforation, hemorrhage, obstruction and cancer.