Treatment with recombinant human growth hormone does not increase the risk for nonfunctioning pituitary adenoma or craniopharyngioma among adults with GH deficiency, according to an analysis of retrospective data published in The Journal of Clinical Endocrinology & Metabolism.

“The majority of patients with adult GH deficiency have a pituitary tumor, especially nonfunctioning pituitary adenoma (NFPA) and craniopharyngioma, and have received surgical and/or radiation treatments for their primary pituitary tumor,” Marco Losa, MD, associate professor in the department of neurosurgery at Vita-Salute San Raffaele University of Milan, told Healio. “Nevertheless, the risk for tumor recurrence among individuals with NFPA or craniopharyngioma is not negligible during long-term follow-up, and a major issue when discussing with such patients whether to initiate recombinant human GH therapy is the theoretical possibility that GH therapy may increase that risk. Research in this area did not show signs of alarm. However, the perfect study to demonstrate the lack of any associated risk is almost impossible to organize because of the costs, duration and ethical issues. Our study was implemented just to add another piece of information on the risk for pituitary tumor recurrence during GH therapy.”

In a retrospective, observational study, Losa and colleagues analyzed data from 283 patients with adult GH deficiency with a confirmed histological diagnosis of NFPA (n = 194) or craniopharyngioma (n = 89) who underwent surgery between 1995 and 2018. Within the cohort, 123 patients opted for GH treatment at a median of 14 months after the index surgery (43.5%), with the remaining patients serving as controls. Median radiological follow-up for the cohort was 88 months.

Primary outcome was the risk for tumor recurrence in GH-treated and control patients. 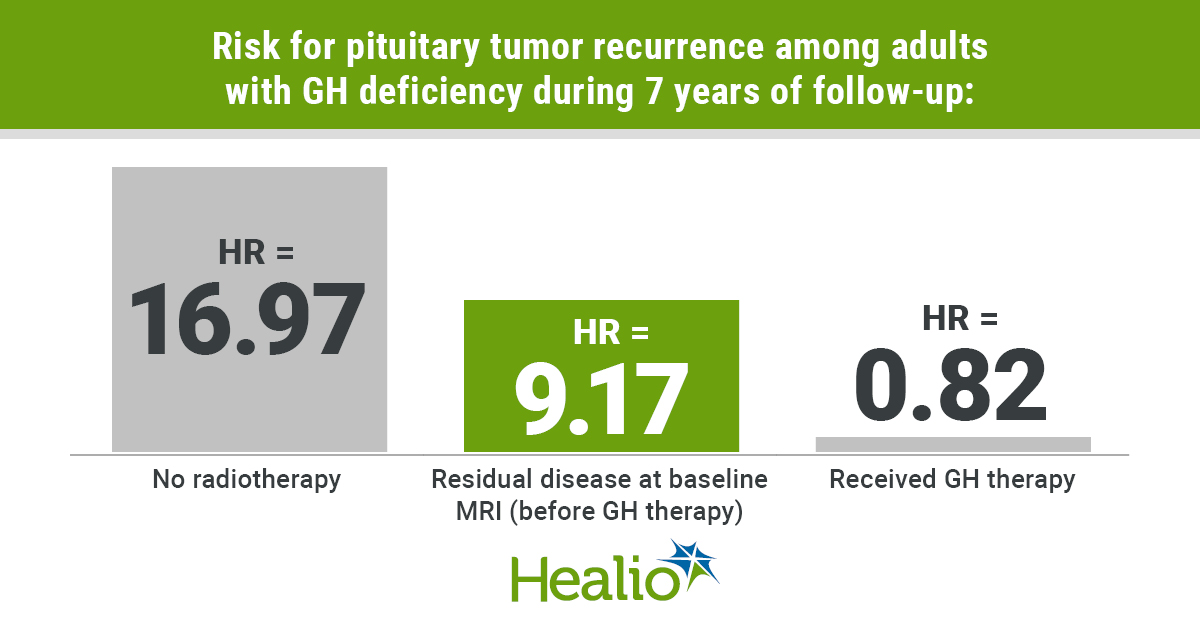 Treatment with recombinant human growth hormone does not increase the risk for nonfunctioning pituitary adenoma or craniopharyngioma among adults with GH deficiency.

In multivariate Cox analysis, researchers found that the risk for tumor recurrence was associated with detection of residual disease at the baseline MRI, defined as the last MRI performed before the start of GH treatment or the first MRI after surgery among controls (HR = 9.17; 95% CI, 4.88-17.22) and with not having undergone radiotherapy (HR = 16.97; 95% CI, 7.55-38.16), whereas GH treatment was no longer associated with a lower risk of growing evidence that GH therapy has a neutral effect on the recurrence of pituitary tumors (HR = 0.82; 95% CI, 0.47-1.44) .

“Taking advantage of the large sample size of patients followed up at our center in the last 20 years and the homogeneity of treatment strategy, we could demonstrate that GH therapy was not associated with an increased risk of tumor recurrence in patients with either NFPA or craniopharyngioma,” Losa said. “We have highlighted some bias in previous observational studies and took steps to circumvent the problems arising from a retrospective study. The most relevant clinical implication of our findings is, in my opinion, a further piece of evidence that GH therapy has a neutral role on the long-term control of NFPA and craniopharyngioma. Patients confronting the decision of whether to initiate GH therapy may find that the available data, including our study, are reassuring.”

Losa noted that it is a common rule to stop GH therapy for individuals with evidence of recurrence of NFPA or craniopharyngioma, independent of the clinical benefit achieved with the replacement therapy.

“Once assured that GH therapy is not increasing the risk for tumor recurrence, the next question might be whether GH therapy may be continued without interruption while implementing the therapeutic strategy, ie, surgery and/or radiotherapy, to control the growth of the tumor.” – by Regina Schaffer

Marco Losa, MD, can be reached at the Department of Neurosurgery, IRCCS San Raffaele, Via Olgettina 60, 20132 Milano, Italy; email: losa.marco@hsr.it.