Biography: Aldasouqi is professor of medicine and chief of the endocrinology division at Michigan State University College of Human Medicine in East Lansing.

The photo associated with this post tells a story that is very dear to my heart: For those who are familiar with sports, the photo shows a Yasaka Ping-Pong racket.

The person who shared this passion was a patient that I encountered about 30 years ago.

The place where this story took place was Hamad General Hospital (HGH), in Doha, Qatar.

As alluded to in prior posts, I joined the internal residency program at HGH in 1988, where I completed a 4-year residency accredited by the Arab Board of Medical Specialties. By many measures, those were amongst the best years in my 40-year journey in medicine (I started medical school at Jordan University in 1978).

There were numerous stories that can be told about that wonderful station at HGH, but those are for another day. In this post, I will tell this one story. 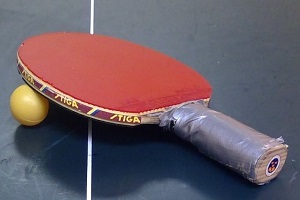 One night, I was on-call in the emergency room. This was the common terminology for emergency departments at that time, though, more recently, the term has gradually changed to emergency department. Philosophically speaking, ED is more meaningful than ER, but I wish to stick with “ER” in this post. In part, the reasoning stems from my favorite television medical drama, ER.

HGH’s ER was a very busy facility in Doha. Later in the evening, a man in his 40s came to the ER with severe headache, and I oversaw his evaluation. At the time, I was a junior resident. His headache was due to severe hypertension. After managing his blood pressure and headache, I discharged him.

At that time, especially in communities outside the developed world, people would not have a regular family doctor, and they would only see a doctor or go to the ER when they felt ill. Therefore, follow-up after ER visits was not common as it is today. Here in the U.S., for example, patients are given explicit instructions about the need to have follow-up with their family doctors after ER visits. It was perhaps a rare practice that ER doctors would track patients after discharge for follow-up discussions. One explanation perhaps is the nature of ER shift schedule, where doctors move on after finishing one shift and going home. As a disclaimer, I do not recall how critical lab results that were completed after patients had been discharged were handled at HGH at the time.

A few hours after the patient was discharged, his lab tests were relayed to the ER as critical: His creatinine was significantly high, suggesting chronic kidney disease. If I remember correctly, it may have been 2 mg/dL to 3 mg/dL, which suggests at least stage 3 CKD. This explained his elevated BP. While I was not sure what to do with the results, I went back to the patient’s chart, and I found a telephone number that must have been his home phone number as there were no cell phones at the time.

The next morning, I called the number in his chart. I do not recall the details, but I vaguely remember that his family were so scared/surprised that a doctor from the ER was calling. I asked that he come to see me later that day in the medicine clinic to discuss his lab results. I did not have a clinic that day, but I availed myself after duty hours to see him.

He came, both confused that a doctor had called him and concerned about the lab results. I explained to him what the results meant, and I arranged that he get seen ASAP by the nephrology specialist. Medically speaking, though I do not recall the specifics, the patient would probably have had hypertension-induced (early) renal failure. Other than the biochemical abnormality, and the hypertension, the patient was otherwise quite healthy. Not only that, but he was physically fit and an athlete: He was a very skilled Ping-Pong player. And that was the shared passion! Likewise, I have been a relentless Ping-Pong player since elementary school.

After I completed the medical part of the clinic visit, he expressed his appreciation and gratitude, explaining that he was so intrigued that a doctor called a patient at home after an ER visit. I was so humbled by that expression, and then we discussed life issues. I was so pleased to know about his passion for Ping-Pong, and we exchanged stories. I must have shared with him what I usually would brag about: “When I was a teenager, I once played with Jordan’s Ping-Pong champion, Marwan Dia, at Al-Jazeera Club in downtown Amman!” Of course, that was during his practice, while he was waiting for his coach, and there were only me and him in the Ping-Pong hall, and so when I asked if he could play a little with me, he graciously agreed.

It was a swift, two-game sweep, though he clearly played at a very low level to match my (comparatively humble) skills. If I remember correctly, Dia, a left-handed player, was the swiftest, most talented and most skilled Ping-Pong player in Jordan’s history (in that era).

As we shook hands on his way out of the clinic, the patient and I agreed that we play Ping-Pong together. I invited him to join me as a guest at HGH’s sports club, where I used to go on weekends, to socialize with friends and to practice my favorite sport, Ping-Pong.

When the patient came to the club for the first time, he surprised me with a present: An expensive Yasaka Ping-Pong racket (pictured). To this day, 30 years later, I still have the racket in the basement, and I use it whenever I play Ping-Pong. Of course, we do have a Ping-Pong table in the basement. I made sure that all my children (two boys and two girls, now aged 20 to 30 years) play Ping-Pong well — and they all do. I would begin training them in early elementary school.

Ping-Pong and I go way back. At home in Amman, as well as in Doha and Jeddah (where I worked for 4 years each), I would play Ping-Ping at every opportunity. In medical school, I was in charge of the sports section of the Jordan University Medical Students Association (while a 5th year medical student). I arranged Ping-Pong tournaments, including a major out-of-town tournament playing against Yarmouk University in Irbid, North Jordan. Also, I arranged a Ping-Pong tournament at Hurley Medical Center (Flint-Michigan) when I was a medical resident in the early 1990s. Finally, I have been involved with Ping-Pong tournaments with the kids and their friends, both in our basement and at their high school in East Lansing, Michigan.

This precious Ping-Pong racket that was a present from my patient is so dear to my heart. It always reminds me of that patient. As we speak, I do not recall the patient’s name, but I recall that he was an accountant in a company, and he was an expatriate from Lebanon. Although I hope that if he somehow happens to read this post, he will remember me.

It saddens me that Ping-Pong is not a popular sport in America, whereas it is popular everywhere else. It is just like football, that is soccer, the non-U.S. football! If I can speak as both a doctor and an avid Ping-Pong player, I can assure Americans that a Ping-Pong table in the basement is an invaluable exercise device indeed. If you must choose between a pool table and a Ping-Pong table, choose the latter, at least for health and fitness purposes. Learning to play the game is quite easy; with practice, one can become a pro in no time.

It always brings some tears to my eyes when I remember this story about this shared passion with a gracious patient, whom I will never forget.