Clear phenotypic differences can be detected in the pancreases of children with type 1 diabetes when stratified by age at diagnosis, according to findings published in Diabetologia.

“Our study describes, for the first time, that type 1 diabetes can occur in two distinct forms, or endotypes,” Pia Leete, PhD, a postdoctoral research fellow at the University of Exeter College of Medicine and Health, U.K., told Healio. “In this instance we have named them type 1 diabetes endotype 1 (T1DE1) or endotype 2 (T1DE2). These forms differ in the degree of beta cell destruction, the number of immune cells involved in this destruction, as well as distinct difference between individuals in the processing of proinsulin within the beta cells themselves. These endotypes are also associated with different ages at diagnosis.”

Leete and colleagues utilized immunohistological analysis to determine the distribution of proinsulin and insulin in the islets of pancreas samples recovered soon after type 1 diabetes onset (within 2 years) from 19 children diagnosed before age 7 years (n = 5), between 7 and 12 years (n = 7) or at age 13 years or older (n = 7). Researchers correlated the distribution patterns with insulitis profiles in the inflamed islets of the same groups of individuals. Additionally, researchers and proinsulin to C-peptide ratio among 171 living adults with a longer duration of disease (at least 5 years), who were diagnosed within the same age ranges.

Clues from age at diagnosis

Researchers observed distinct patterns of proinsulin localization in the islets of children with recent-onset type 1 diabetes, which differed markedly between children diagnosed before age 7 years and those diagnosed at age 13 years or older. 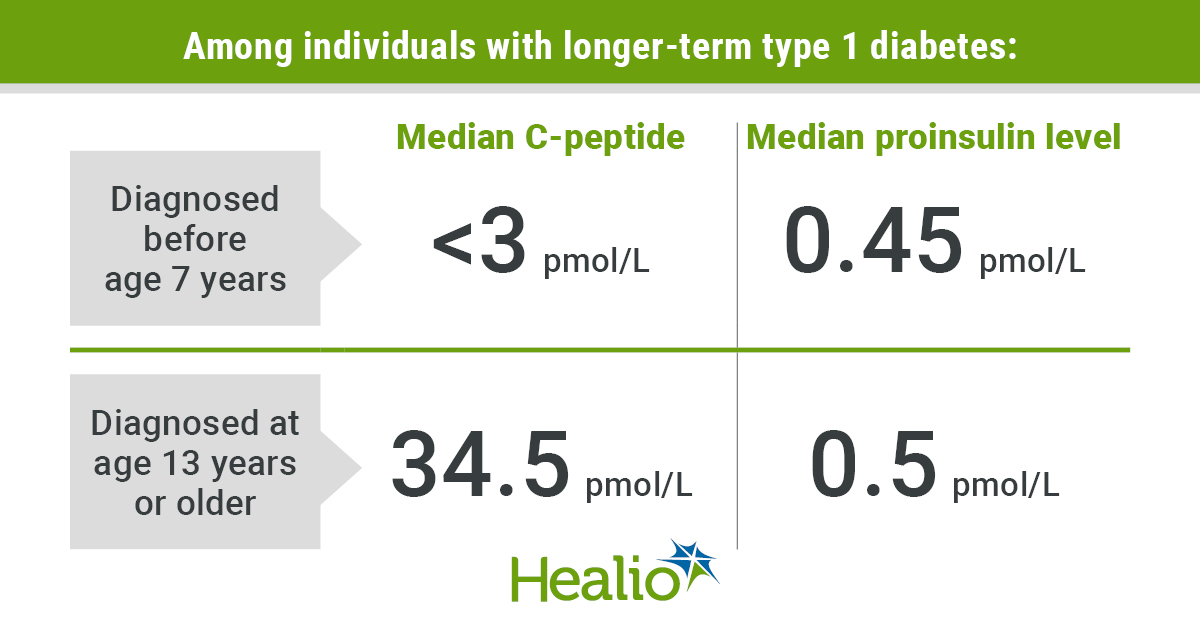 When stratifying the children with type 1 diabetes age of diagnosis clear phenotypic differences are identified.

“This age distribution is strongly reminiscent of the age profiles defining the two immune cell phenotypes reported previously in the inflamed islets of young people,” the researchers wrote, adding that, among children aged 7 years or younger or aged 13 years or older at diagnosis, there was a strong correlation between insulitis profiles defined previously as “CD20Hi” or “CD20Lo,” respectively.

The researchers found that these two distinct patterns were observed among children in the intermediate age group.

“We found that the proinsulin distribution in the insulin containing islets of children aged 7 to 12 years at diagnosis with a CD20Hi immune profile replicated those diagnosed at < 7 years,” the researchers wrote. “By contrast, the pattern seen in children who had a CD20Lo immune profile replicated those diagnosed at 13 years. This segregation of the ‘CD20’ and proinsulin-insulin co-localization phenotypes supports the conclusion that childhood-onset type 1 diabetes comprises distinct endotypes.”

In assessing circulating proinsulin and C-peptide concentrations among individuals with longer-term type 1 diabetes, researchers found that the patients who were diagnosed at age 7 years or younger had much lower stimulated C-peptide levels compared with those diagnosed at age 13 years or older (median, < 3 pmol/L vs. 34.5 pmol/L; P < .0001).

“Strikingly, the median proinsulin to C-peptide ratio was significantly increased in those diagnosed at < 7 years compared with individuals diagnosed at 13 years,” the researchers wrote.

“The additional difficulty of balancing blood glucose levels that some people experience may be linked to the more profound beta cell loss experienced by those individuals with endotype 1, or T1DE1,” Leete said. “Finding these patients and supporting them more intensively may help ameliorate the longer-term damage that dysregulation of blood glucose can lead to and help them understand and manage their disease more effectively. Meanwhile, for those people with T1DE2, who may retain significant beta cell numbers that may be dormant or ‘sleeping,’ we hope to learn how to ‘waken’ and protect these cells. If we can achieve this goal, it may provide an opportunity for these individuals to start being able to use their own insulin again.”

The researchers noted that the number of samples available for study for proinsulin processing in each age group was small, and that additional endotypes may be defined as further variables are considered.

“Nevertheless, the present results suggest that future therapeutic trials in type 1 diabetes should be designed to take account of the important etiopathological differences that are now being revealed,” the researchers wrote. “This might be achieved most readily by noting the age at diagnosis. Specifically, we propose that children diagnosed in the earliest years of life may require different immunotherapeutic options vs those who are older at onset.” – by Regina Schaffer