Teens with obesity more likely to develop cancer during midlife

Adolescent obesity is linked to midlife cancer risk among men and women, highlighting the need to tackle obesity early in life, according to findings from a population-based study published in The Lancet Diabetes & Endocrinology.

“Our study indicates that adolescent obesity is a major risk factor for cancer incidence in young and [middle] adulthood,” Gilad Twig, MD, PhD, professor in the research and academic division of the Israel Defense Forces Medical Corps in Ramat Gan, Israel, and colleagues wrote. “Given the global increase of obesity in childhood and adolescence, the cancer burden among young adults is expected to increase.”

Twig and colleagues analyzed medical and socioeconomic data from 2,298,130 adolescents aged 16 to 19 years routinely screened as part of an assessment for medical eligibility for mandatory military service between 1967 and 2012 (928,110 women; mean age at medical evaluation, 17 years). Researchers assessed BMI during adolescence, classified according to CDC percentiles: less than fifth percentile (underweight), fifth through the 49th percentile (low-normal BMI), 50th through the 74th percentile, 75th through the 84th percentile, 85th through the 94th percentile (overweight) and the 95th or greater percentile (obese). Researchers used Cox proportional hazard models to estimate HRs for incident cancer cases using the group with low-normal BMI during adolescence as reference. Primary outcome was any cancer diagnosis between 1967 and 2012, using data from the Israeli National Cancer Registry. The secondary outcome was all-cause mortality among those who developed cancer. 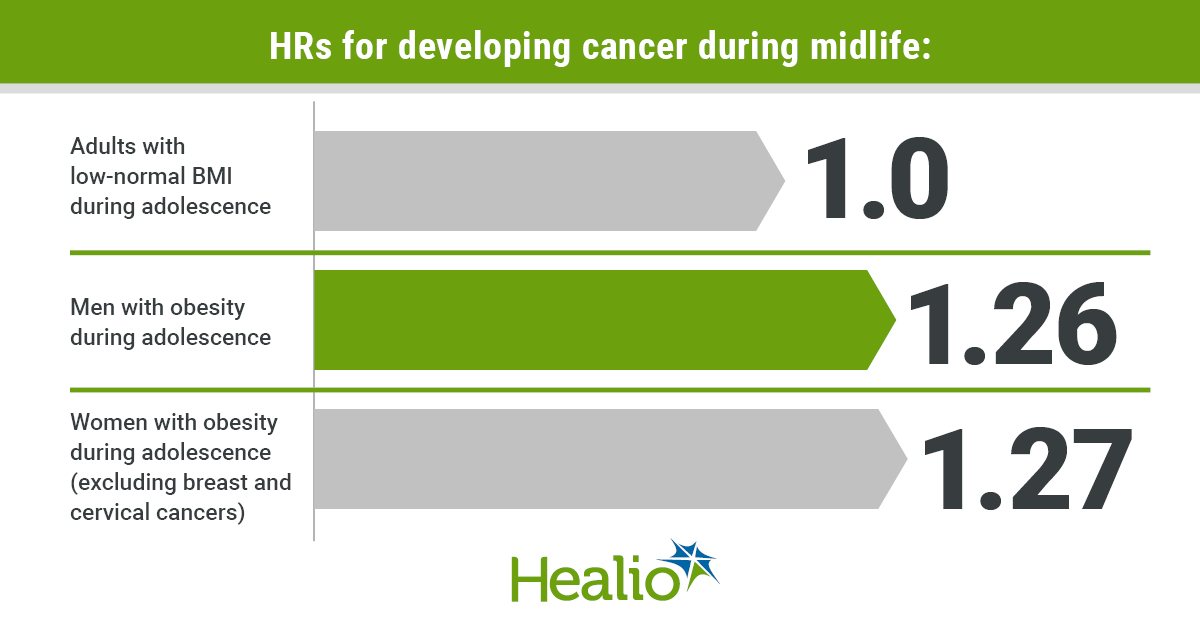 Adolescent obesity is linked to midlife cancer risk among men and women, highlighting the need to tackle obesity early in life.

“We determined unadjusted associations of BMI with cancer-specific incidence and found that BMI was inversely associated with lung cancer in men (6.1% of cancers) and breast and cervical cancers in women (52.6% of cancers),” the researchers wrote. “Therefore, we analyzed cancer incidence in women after excluding cases of these cancers to avoid blunting the effect of obesity during adolescence on cancer risk by these two cancer types.”

In the analyses excluding women with breast or cervical cancers, researchers observed a dose-dependent increase in cancer incidence across BMI groups. Compared with women with low-normal BMI during adolescence, women with obesity during adolescence were 27% more likely to develop cancer (95% CI, 1.13-1.44).

The researchers found that having a high BMI during adolescence was associated with increased mortality risk across all cancer groups for both sexes. HRs for all-cause mortality were 1.33 for men with obesity as adolescents (95% CI, 1.18-1.49) and 1.89 for women with obesity during adolescence (95% CI, 1.56-2.28), with results persisting after adjustment for age at study entry, birth year, education and socioeconomic status.

In a related editorial that accompanied the study findings, the journal stated that the association of obesity with cancer, like that of obesity with diabetes and nonalcoholic fatty liver disease, underscores that noncommunicable diseases “do not exist in isolation.”

Obesity-related cancer risk has become a well-recognized entity, and consequently, the increased risk for cancer among people with type 2 diabetes has also joined the list of complications of these metabolic disorders. As the worldwide epidemic of obesity and diabetes grows, so too will the incidence of cancer. Importantly, many of the cancers that develop in this situation are more aggressive and less responsive to current therapies, and consequently, the prognosis for the patients is worse.

While many factors may be causative in these effects, recently, two major underlying factors have emerged: endogenous hyperinsulinemia associated with insulin resistance and hyperlipidemia; both prominent in adults with obesity and type 2 diabetes.

Several recent studies have raised the question as to whether childhood obesity, which is of growing concern, is associated with increased adult cancer risk, since children with obesity are likely to become adults with obesity. In particular, since obesity is associated with nonalcoholic fatty liver disease and steatohepatitis, this could lead to more serious consequences, such as cirrhosis and hepatocellular carcinoma. Indeed, these studies have confirmed this unfortunate outcome among adults who were obese during adolescence.

In the current study by Furer and colleagues, more than 2 million participants were followed from childhood into adulthood and the relationship between cancer incidence and BMI studied. The researchers found a gradual but significant increased incidence of most cancers, both epithelial and lymphomas, across BMI percentiles, among men and women. This registry study is the largest of its kind with over 40 years of careful follow-up and not only confirms our previous suspicions but emphasizes the importance of dealing with the burgeoning epidemic of obesity. Thus, to reduce the obesity epidemic in adults, and its consequences, one needs to attack obesity in adolescence.

Derek LeRoith, MD, PhD
Endocrine Today Editorial Board Member
Professor of Medicine
Hilda and J. Lester Gabrilove Division of Endocrinology, Diabetes and Bone Diseases
Icahn School of Medicine at Mount Sinai
Disclosures: LeRoith reports he is a consultant for AstraZeneca and MannKind and serves on an advisory board for AstraZeneca.