Metformin may help adults with type 2 diabetes avoid additional cardiovascular disease events after an initial episode of acute coronary syndrome, or ACS, according to findings published in the Journal of Diabetes and its Complications.

Takeuchi and colleagues used medical records from St. Luke’s International Hospital in Tokyo for 569 adults who experienced ACS for the first time (mean age, 63.7 years; 17.2% women) to identify medication use and additional CVD events, such as cardiac death, myocardial infarction and ischemic stroke, during a mean 4.2 years of follow-up. 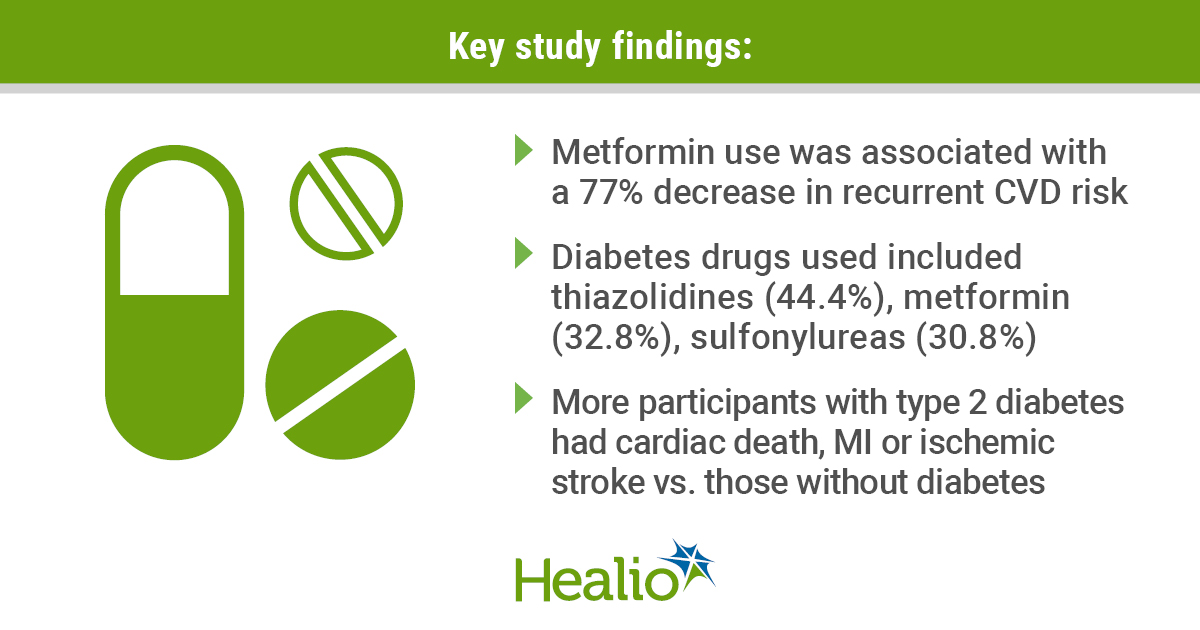 The researchers noted that “there was no significant difference in the risk for recurrent CVD events by HbA1c levels.”

“The findings from the present study suggest that choice of medication rather than glycemic control during the acute phase of ACS may have greater prognostic value. In particular, use of metformin after ACS episodes showed the lowest recurrence among antidiabetic medications,” the researchers wrote. “Although metformin was once contraindicated in patients with cardiac problems due to risk of lactic acidosis, our results support the current understanding of this medication, where the cardioprotective effects may outweigh the risks.” – by Phil Neuffer

Metformin is the most economical and widely used drug in type 2 diabetes and recommended as the first-line agent by many organizations, including the American Diabetes Association. In the long-term UK Prospective Diabetes Study, a randomized clinical trial in the newly diagnosed subjects with type 2 diabetes, metformin lowered the incidence of myocardial infarction and all-cause mortality, compared with diet or insulin. However, the overall evidence for its benefits on cardiovascular outcomes or mortality is limited and remains controversial.

This question has assumed a greater importance recently, due to the impressive CV benefits with newer anti-hyperglycemic agents, particularly GLP-1 receptor agonists and SGLT2 inhibitors in several large randomized clinical trials, raising the question whether these newer agents should be used preferentially in high-risk patients, even before metformin. However, most of the subjects in these studies were also on metformin at baseline and throughout the study.

In light of this background, some recent studies exploring the CV benefits of metformin are of interest. In this retrospective cohort by Komaru and colleagues from Japan, 198 patients, with type 2 diabetes were recruited soon after acute coronary syndrome and followed for up to 5 years. Of interest, they show that those on metformin alone or in combination with sulfonylureas had much lower rates of recurrent CV events compared with those on sulfonylureas, thiazolidinediones or DPP-IV inhibitors. Unfortunately, the number of subjects studied and CV events were small, with very few subjects on the newer agents, including GLP-1 receptor agonists and none on SGLT2 inhibitors. Of note, the CV benefits were unrelated to HbA1c reduction.

These results are supported by a recent reanalysis of a large randomized clinical trial with saxagliptin (most with previous CVD), reporting that those on metformin at baseline had an overall 25% reduction in total mortality compared with those not on metformin. However, there was no significant superiority on CV events in either group in that trial (Bergmark BA, et al. Circulation. 2019;doi:10.1161/CIRCULATIONAHA.119.040144). Similar results on mortality reduction with metformin were found in a meta-analysis of 25 observational studies by the authors.

In summary, increasing evidence supports the benefits of ongoing use of metformin as the initial treatment in patients with type 2 diabetes except in those with advanced kidney disease.