Healthy, middle-aged adults without osteoporosis assigned to a high-dose daily vitamin D liquid drop had reduced bone mineral density at 3 years when compared with similar adults assigned to a daily low-dose supplement, according to findings published in JAMA.

In a single-center study, Burt and colleagues analyzed data from 311 healthy adults aged 55 to 70 years without osteoporosis and a baseline 25-hydroxyvitamin D level between 30 nmol/L and 125 nmol/L (53% men; mean age, 62 years; 95% white). Researchers randomly assigned participants to daily oral doses of vitamin D3 (liquid drops) at 400 IU (n = 109), 4,000 IU (n = 100) or 10,000 IU (n = 102), with calcium supplementation provided to participants with a dietary intake of 1,200 mg or less per day. Coprimary outcomes were total volumetric BMD at the radius and tibia, assessed with high-resolution peripheral quantitative CT (HR-pQCT), and bone strength (failure load) at the radius and tibia estimated by finite element analysis.

Researchers found that, at both the radius and tibia, higher doses of vitamin D supplementation were associated with greater losses of total volumetric BMD. 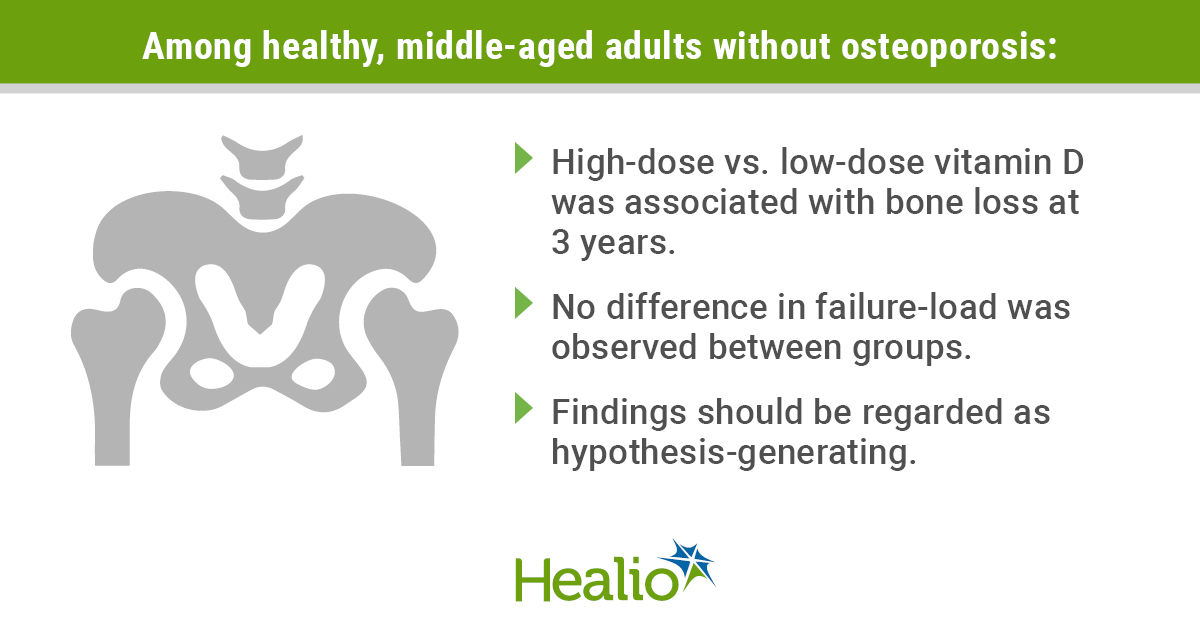 The researchers did not observe between-group differences for changes in failure load at the radius (P = .06) or tibia (P = .12).

At the conclusion of the study, the researchers observed a decline in 25-(OH)D levels among participants in the 10,000 IU group at the 24-month assessment. Researchers then conducted an investigation and found that the supplier of vitamin D drops changed its manufacturing source, reducing the long-term stability of the supplement.

“With independent third-party testing and information from Ddrops [Canada], participants began receiving a dose estimated to vary between 2,000 and 10,000 IU per day,” the researchers wrote. “Despite reduced supplementation, mean 25-(OH)D levels remained higher than the 4,000 IU group throughout the study.”

The researchers noted that the benefit of vitamin D supplementation for bone health may be seen only in the treatment of vitamin D deficiency.

“There is also evidence that very high intermittent (monthly or annual) doses of vitamin D may be harmful, with increased risk of falls or fracture; but not all such studies report increased risk of falls or fractures,” the researchers wrote. “There was no effect on fall rates in this study and no evidence of a relationship between changes in volumetric BMD and fracture risk, which may reflect the healthy status of the population that was studied. However, if high-dose vitamin D does stimulate an increased rate of bone loss, this could have greater clinical significance in older individuals with osteoporosis.” – by Regina Schaffer