Women who initiated systemic hormone therapy around the time of menopause were at greater risk for invasive breast cancer than similar never-users, according to an analysis of nearly 60 epidemiologic studies published in The Lancet.

Results showed the increased risk doubling for women who used hormone therapy for 10 years vs. 5 years and some excess risk persisting more than a decade after stopping therapy.

“The totality of the worldwide evidence shows that  breast cancer risk is increased while women use menopausal hormone therapy and also after they stop taking it,” Valerie Beral, DBE, FRS, FRCOG, FMedSci, professor of epidemiology and co-director of the cancer epidemiology unit at the University of Oxford in England, told Endocrine Today. “This means that the absolute risk is greater than previously thought. For example, 5 years of menopausal HT, starting at age 50 years, would increase breast cancer incidence from ages 50 to 69 years by about one additional case in every 50 users of estrogen plus daily progestogen HT, one in every 70 users of estrogen plus intermittent progestogen HT, and one in every 200 users of estrogen-only HT."

Beral and colleagues analyzed individual participant data from 58 studies, including 24 prospective cohort studies, conducted between January 1992 and January 2018 that assessed the type and timing of menopausal HT use (mean age at menopause, 50 years; mean age at HT initiation, 50 years). Current users were included up to 5 years (mean, 1.4 years) after last-reported menopausal HT use. Researchers used a nested, case-control design, comparing estrogen alone vs. never use and combination therapy vs. never use. Each women with a diagnosis of invasive breast cancer was matched with four controls by age, birth year and geographic location. Researchers used logistic regression analysis to estimate adjusted risk ratios for breast cancer, comparing menopausal HT users with never users. 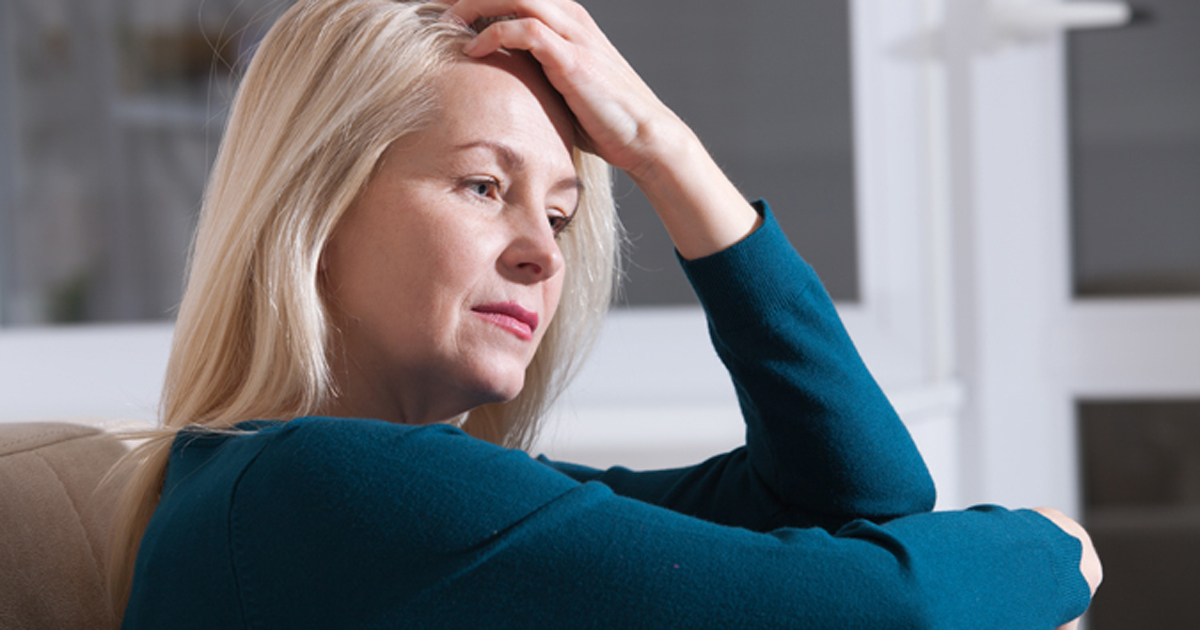 Women who initiated systemic hormone therapy around the time of menopause were at greater risk for invasive breast cancer than similar never-users, according to an analysis of nearly 60 epidemiologic studies.
Source: Adobe

Among women with complete information, mean menopausal HT duration was 10 years for current users and 7 years for past users. During prospective follow-up, 108,647 women developed breast cancer at a mean age of 65 years. Among these women, 55,575 (51%) had used menopausal HT.

For a given preparation, the RRs during years 5 to 14 of current use were greater for estrogen-receptor-positive tumors vs. estrogen-receptor-negative tumors. Risks for breast cancer were similar for women initiating menopausal HT at ages 40 to 44, 45 to 49, 50 to 54, and 55 to 59 years, but attenuated by starting after age 60 years or by adiposity.

“Although use of either type of [menopausal] HT for less than 1 year was associated with little subsequent risk, for women of average weight in developed countries, 5 years of use, starting at age 50 years, would cause an appreciable increase in the probability of developing breast cancer at ages 50-69 years,” the researchers wrote. “About half the excess would be during the first 5 years of current use of [menopausal] HT, and half would be during the next 15 years of past use.”

In a commentary accompanying the study, Joanne Kotsopoulos, PhD, a scientist at Women’s College Research Institute and associate professor at the Dalla Lana School of Public Health at the University of Toronto, noted that the main analysis was limited to prospective studies with detailed information on HT use and adjusted for potential confounders.

“The complexity of the study design makes it difficult to appraise the results, and most of us will take the results on face value,” Kotsopoulos wrote. “However, it is often difficult to avoid biases in prospective studies in which the period of exposure (HT use) overlaps with the period of risk (breast cancer incidence). Some women switch from being nonusers to users in the follow-up, and the duration of use is not a constant but changes each year that hormones are used.”

According to Kotsopoulos, clinicians should take a “rational and comprehensive approach” to the management of menopausal symptoms, with careful consideration of the risks and benefits of initiating menopausal HT for each woman.

“This might be dependent on severity of the symptoms, contraindications for [menopausal] HT (ie, breast cancer, cardiovascular disease and stroke), and BMI, and could take into account patient preference,” Kotsopoulos wrote. “For likely candidates, [menopausal] HT (preferably estrogen alone) should be initiated around the time of natural menopause and ideally limited to 5 years of use.”

Using the individual participant meta-analysis methodology is a strong way to do this kind of analysis. The researchers used only prospective studies, which eliminate problems like recall bias, where women who have cancer may be more likely to remember and report hormone use in their past vs. women without cancer.

There are some down sides to this type of analysis, which the authors do not appear to acknowledge, such as the need to group the data by category of hormone use, which may over- or underestimate risks for different HT preparations.  However, the large number of women in this analysis helps to sharpen some of the blurry edges of knowledge in this area.

For example, HT studies have not been performed with women who are prematurely menopausal, for whom HT is recommended, typically until age 50 years. This study confirms that postmenopausal HT use has a similar effect on breast cancer risk in younger women when compared with women aged at least 50 years.

The study also reinforces the approximate breast cancer risks established by the WHI and indicates that most hormone preparations of estrogen plus progestin have the same effect on the breast. This is how I counsel my patients, because I do not want to minimize risks that are not truly known. It also puts the lie to marketers of bioidentical hormones, who imply in their advertising that their particular preparations are more natural and therefore may avoid these risks. That is not true and patients should not believe this.

This study suggests that the risk for breast cancer goes up immediately upon starting HT. Even though the risk did not emerge until 4 to 5 years of HT in the WHI, it was always there. It was just a matter of numbers. This is not a surprise, but a helpful confirmation.

The well-known lower risk of estrogen alone (actually a risk reduction in the WHI) is confirmed here. This study adds to the knowledge about the effects of continuous vs. intermittent progestin. Intermittent progestin seems to carry less risk, but this requires a woman to continue to have menstrual periods after her menopause.

Finally, the attenuation of risk with obesity was another helpful finding that will be beneficial in patient counseling. It has been thought that the breast cancer risk associated with weight gain and obesity plus HT might be additive; in this study, it looks like a woman will not be putting herself into double jeopardy if she has obesity and is prescribed HT.

Nanette Santoro, MD
Professor and E. Stewart Taylor Chair of Reproductive Endocrinology and Infertility
Department of Obstetrics and Gynecology
University of Colorado Denver
Disclosures: Santoro reports that she serves on a clinical advisory board for Astellas Pharma, Inc. and holds stock options for Menogenix, Inc.

The presentation of the findings is problematic, because the results are likely to be taken out of context and will frighten women. Menopausal hormone therapy (HT) has a complex balance of benefits and risks. It is important for clinicians to individualize decision making and consider a woman’s severity of symptoms, underlying risk factor status and personal preferences, and not focus on only a single health outcome in isolation.

Decision making should be guided by the big picture. Many of these risks, on an absolute scale, are small. Often, those risks are offset by reduction in symptoms, improved quality of life and benefits for other health outcomes, such as fractures. The net effects can be favorable for some women, particularly women in early menopause with moderate to severe vasomotor symptoms at low risk for breast cancer and cardiovascular disease.

Potential for bias in observational studies of HT and breast cancer also warrants consideration. Women on HT tend to have more regular mammography. Sometimes, if a patient has breast tenderness related to HT, she may be more sensitized to breast-related issues and clinicians may be more likely to examine the breasts or recommend a biopsy in these patients. Differences in detection/diagnosis between users and nonusers can lead to an increase in relative risk. Now, it is true that the incidence of breast cancer tends to increase with longer duration HT and randomized trials cannot assess long duration, as they tend to be limited to 5 to 7 years of treatment. The WHI trial showed an increase in breast cancer with combination estrogen plus progestin but did not show an increase with conjugated estrogen use alone. The risk for breast cancer may vary by formulation, dose, and duration of HT, as well as by the patient’s risk factor status. Reassuringly, the Lancet study reported no increase in risk with vaginal estrogen.

Clinicians need to evaluate health outcomes more broadly. In fact, even for cancer outcomes, evidence from the WHI is quite reassuring with respect to total cancer incidence and total cancer mortality, with either estrogen/progestin formulations or estrogen alone, with more than 15 years of cumulative follow-up. This is because there are different effects of HT on other cancers, including a lower risk for colorectal cancer and endometrial cancer with combination HT use in several studies. HT has been linked to increased risk for venous thrombosis (lower risk with transdermal vs. oral) and stroke, but decreased risks for fracture and type 2 diabetes. Additionally, HT had a neutral effect on all-cause mortality in the overall WHI cohort and a favorable trend in younger women.

Women who have a family history of breast cancer or are otherwise at increased risk may want to avoid HT. There are non-hormonal options to manage hot flashes and other menopausal symptoms. The bottom line is women need to have reliable information about both the risks and benefits of HT, in the context of individualized decision making based on their personal risk factor status, family history and personal preferences.  Then, an informed decision can be made on whether the benefits of HT are likely to outweigh the risks.