New-onset diabetes is more likely to occur in adults who consistently use statins compared with those who do not use such medications, according to findings published in Diabetes/Metabolism Research and Reviews.

“Heart disease is the leading cause of death for both men and women in the U.S.,” Victoria Zigmont, PhD, MPH, an assistant professor in the department of public health at Southern Connecticut State University in New Haven, told Endocrine Today. “Additionally, according to the CDC, 38% of adults over age 40 [years] use a statin, so it is important to understand what effects statin use have on diabetes development.”

Zigmont and colleagues identified 4,683 adults who had hypertension or hyperlipidemia or experienced cerebrovascular disease, congestive heart failure, acute myocardial infarction, percutaneous coronary implant, coronary artery bypass, ischemic heart disease, stroke, atheroembolism or atherosclerosis, which increased the likelihood that statins would be used, according to the researchers.

All participants were members of the same insurance plan, and the researchers examined medical and pharmacy records to identify cardiovascular disease risk, HbA1c measures and statin prescriptions. The researchers found that 755 participants (mean age, 45.83 years; 62% women) received at least two statin prescriptions during the trial period (2011-2014), which met the study definition for statin use, whereas 3,928 participants did not reach this threshold (mean age, 49.17 years; 51.1% women). 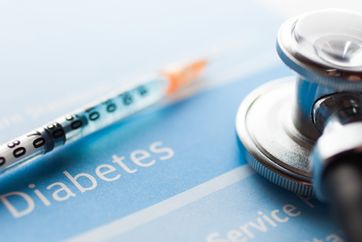 New-onset diabetes is more likely to occur in adults who consistently use statins compared with those who do not use such medications.
Adobe Stock

An HbA1c level of more than 6% was observed in a greater prevalence of participants who used statins at study conclusion compared with those who did not use the medication (prevalence difference, 0.065; 95% CI, 0.002-0.129). Among those who did not use statins, 5% developed new-onset diabetes, whereas 14.8% of those using statins developed the condition. According to the researchers, using statins roughly doubled new-onset diabetes risk vs. not using statins (adjusted HR = 2.2; 95% CI, 1.35-3.58), and the risk was tripled when consistent statin use was observed across at least 2 years (aHR = 3.33; 95% CI, 1.84-6.01).

“Statins are a well-established way to prevent heart attacks and strokes. It could be harmful if patients stopped taking their statins, and they should talk to their physicians if they have concerns about side effects associated with their medications,” Zigmont said. “These study findings indicate that statin users should receive special guidance on diet and physical activity for diabetes prevention from their medical care team. These individuals should also receive close monitoring to detect changes in glucose metabolism.” – by Phil Neuffer

Victoria Zigmont, PhD, MPH, can be reached at vzigmont42@gmail.com.

This study based on retrospective data from insurance claims describes an increased risk of developing type 2 diabetes associated with statin use.

This association has been well-documented, first described in the Jupiter Trial (Ridker PM, et al. Lancet. 2012;doi:10.1016/S0140-6736(12)61190-8). Primarily affected were individuals with prediabetes or metabolic syndrome. The overwhelming opinion of the medical community is that the benefits in reducing cardiovascular risk greatly outweigh the risk for developing diabetes in statin-eligible subjects. Also, association does not prove causality.

Of note in the Zigmont paper is that of the 7,000 plus subjects deemed to be statin eligible, only 755 were receiving any statin therapy. Far from indicating overuse of statins, these results point toward an enormous underuse.

The authors should be commended in carrying out this study and emphasizing lifestyle, which is the cornerstone of primary prevention. If the authors can persuade insurers to reimburse adequately for lifestyle treatment, this would be a game-changing contribution.

Antonio Gotto Jr., MD, DPhil
Dean emeritus,
Weill Cornell Medicine
Disclosures: Gotto reports he serves on the board of directors of Esperion Therapeutics, as a consultant for Kowa Pharmaceuticals and on the data safety monitoring board for Akcea Therapeutics.

This retrospective analysis evaluated a cohort of privately ensured employees in the Midwest, as well as their dependent spouses, who worked at least 32 hours per week. The data were derived from yearly biometric screening data, medical claims data and pharmacy claims data from years around 2009 to 2014. Among patients without diabetes, the investigators found a higher prevalence of elevated HbA1c among those treated with statins. Patients taking statins for 2 years or longer seemed to be at highest risk for new-onset diabetes, and no differences were observed by statin class or intensity of dose.

A limitation of this analysis is that it was a retrospective study of a select group of patients covered by private insurance.

Early in statin development, initial data with pravastatin suggested no adverse glucose effects. But as additional statin data accumulated, except for pravastatin and pitavastatin, it became apparent that statins modestly increase glucose levels, especially among patients with risk factors for hyperglycemia and new-onset diabetes mellitus (eg, older, overweight, elevated glucose or triglyceride levels). Other data suggested increased glucose levels may occur with higher-intensity statins taken for longer periods of time. While variable depending on the report, past studies suggest statins may generally increase the risk for new onset type 2 diabetes by about 10%, with an approximate 0.1% increase in HbA1c among patients with diabetes mellitus — with the degree of increase often dependent on the prior mentioned hyperglycemic risk factors, as well as statin intensity and length of treatment.

The important clinical point is that statins reduce cardiovascular disease in patients with and without diabetes. In most cases, statins should be considered as a treatment of choice in treating hypercholesterolemia in appropriate patients. The authors correctly noted that a first good step to mitigate the hyperglycemic effect of statins would include appropriate nutrition, attaining a health body weight and routine physical activity. In addition to potentially reducing the risk of statin-promoted hyperglycemia, such interventions have the added benefit of potentially reducing the risk of cardiovascular disease.