SAN FRANCISCO — Children and adolescents who develop type 2 diabetes may experience a more aggressive form of the disease that can lead to cardiovascular, kidney, eye, nerve and pregnancy complications as they age, according to findings presented at the American Diabetes Association Scientific Sessions.

“The burden of complications is accelerated in these individuals with youth-onset type 2 diabetes transitioning to young adulthood,” Philip S. Zeitler, MD, PhD, professor of pediatrics-endocrinology at University of Colorado Anschutz Medical Campus and medical director of the Children’s Hospital Colorado Clinical and Translational Research Center, said during a press conference. “These are kids in their mid-20s and they’re having problems you’d expect from your grandparents.”

Zeitler presented longitudinal follow-up observations from 517 participants (mean age, 21.2 years; 65% girls) of the Treatment Options for Type 2 Diabetes in Adolescents and Youth (TODAY) study, which compared diabetes treatment with metformin, metformin plus rosiglitazone (Avandia, GlaxoSmithKline) or lifestyle intervention in 699 children with type 2 diabetes (mean age, 14 years; 64.7% girls). After the original trial ended in 2011, there was a 3-year gap before the onset of the TODAY2 follow-up, which yielded the findings that Zeitler presented. Echocardiography, fundus photography and optical coherence tomography were performed during the study just as they had been during the original TODAY trial period (2002-2011), with medical histories evaluated every 6 months and measures of height, weight, blood pressure, HbA1c, lipids and kidney function collected every 12 months. 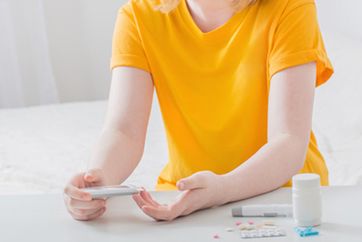 Children and adolescents who develop type 2 diabetes may experience a more aggressive form of the disease that can lead to cardiovascular, kidney, eye, nerve and pregnancy complications as they age.
Adobe Stock

Zeitler said TODAY2 data revealed abnormal echocardiography in 30% of the participants, with an event rate of 6.18 per 1,000 person-years of combined CV events, including arrythmia, coronary artery disease, heart failure and deep vein thrombosis. He also noted prevalence of roughly 26% and 60% for high cholesterol and hypertension, respectively.

“It’s a little complicated to compare this to adult data because of different definitions, etc., but to give you some context, this is about the event rate that was seen in older adults with type 1 diabetes in the study EDIC,” Zeitler said. “So, we’re looking at substantial numbers of coronary events. Further analysis of that is actually underway to piece out the apples and oranges problem of comparing these data to the adults.”

Four participants in the cohort developed chronic kidney disease or end-stage kidney disease, with Zeitler also noting increases to roughly 40% and 55% in prevalence of increased albumin excretion and hyperfiltration, respectively.

“We have evidence that, in the last 2 years, glomerular filtration rate is falling, suggesting, in fact, that these kids are progressing from hyperfiltration to decreased kidney function,” Zeitler said.

“We’ve had a number of amputations likely related to both vascular and nerve abnormalities,” Zeitler said. “Quite a number of toes are now missing in this group of kids.”

“If we draw the conclusion that once these kids get diabetes, they’re in trouble, then the obvious question becomes: Who’s at risk and can you prevent the diabetes from developing? We don’t really know the answer,” Zeitler told Endocrine Today. “What we do know is bits and pieces, that in kids who are at risk, they’re already by the earliest stage of puberty, they’re already starting to show differences from their peers in terms of hypersecretion of insulin and development of insulin resistance, but it’s really just a hint. ... If the problem is the development of this severe resistance and the hypersecretory response to it, then understanding who it is that makes that transition is obviously the important question.” – by Phil Neuffer