SAN FRANCISCO — Those who are most likely to develop type 1 diabetes may be able to stave off the disease for up to 2 years with 2 weeks of treatment with the anti-CD3 antibody teplizumab, according to findings presented at the American Diabetes Association Scientific Sessions.

“Since the original discovery of insulin, there’s been awesome changes in the technologies,” Kevan C. Herold, MD, professor of immunobiology and medicine at Yale University, said during a presentation. “The problem is that, in spite of all of that, we are not very good at ... restoring normal glycemia even with the best technologies that are available today.”

Herold and colleagues from the Type 1 Diabetes TrialNet study group recruited 76 participants who were aged at least 8 years and were related to someone with type 1 diabetes but did not have the condition themselves for a randomized controlled trial. In addition to having a family member with type 1 diabetes, which already put these participants at genetic risk for the disease, according to the researchers, they were required to have no fewer than two diabetes antibodies as well as dysglycemia.

“Part of the reason that we were able to see such a dramatic effect is ... the screening parameters that were used to identify these individuals, identified individuals who were clearly progressing rapidly to type 1 diabetes,” Herold said during the presentation.

Study participants were randomly assigned to teplizumab (median age, 14 years; 43% female) or placebo (median age, 13 years; 47% female) regimen for 2 weeks. The dose of teplizumab was gradually increased during the first 4 days before holding at 826 µg/m2 of body-surface area for the duration of the treatment.

The researchers found that 72% of those who were on placebo developed type 1 diabetes during a median follow-up of 745 days compared with 43% of those who underwent teplizumab therapy. In addition, they reported a 35.9% annualized rate of diagnosis for those in the placebo group and a 14.9% rate for those with teplizumab treatment. Herold and colleagues noted that teplizumab had the greatest treatment effect in the first year of use. Overall, 25 participants in the teplizumab group avoided type 1 diabetes altogether compared with the nine who did so in the placebo cohort. For those who developed the disease, the time from baseline to diagnosis was nearly twice as long for those in the teplizumab cohort compared with the placebo cohort (48.4 months vs. 24.4 months; P < .006). 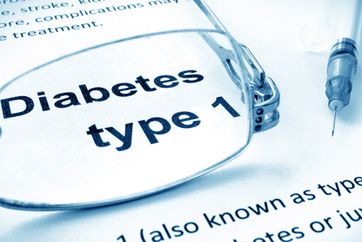 Those who are most likely to develop type 1 diabetes may be able to stave off the disease for up to 2 years with 2 weeks of treatment with the anti-CD3 antibody teplizumab.
Adobe Stock

Herold noted that these positive effects of teplizumab were particularly robust in participants with HLA-DR4 and HLA-DR3 antibodies as well as those with anti-zinc transporter antibodies and those with lower pre-intervention C-peptide responses.

In terms of adverse events related to the treatment, Herold said most were expected, including lymphopenia and Epstein-Barr virus, which largely dissipated over time. Additionally, there were more blood or bone marrow and dermatologic events in the teplizumab group compared with the placebo group (P < .001).

“The 2-year delay in diagnosis, I would argue, is very clinically significant in light of the daily burden of disease management ... particularly with children,” Herold said.

“Is this going to be the same in the general population? We don’t know the answer to that,” he said during a Q&A session. “Now is the time to start thinking about that. If we have a way to end diabetes, we should be thinking about a whole lot more people than just relatives [of those with type 1 diabetes].”

Results were simultaneously published in The New England Journal of Medicine. – by Phil Neuffer

Disclosures: Herold reports he has served as a consultant for Provention Bio and holds a patent for an assay to measure beta-cell death. Please see the study for all other authors’ relevant financial disclosures.

These results and the potential impact for people living with type 1 diabetes and their families is exactly why JDRF funds prevention research. Delaying the progression of the disease is an essential and impactful step toward the prevention, and ultimately a cure for type 1, as a delay in diagnosis is likely to have long-term benefits on glycemic control and the development of acute and long-term complications of type 1 diabetes. This is an exciting and important advance that shows we can change the course of type 1 diabetes. Our goal of cures for and prevention of type 1 diabetes is making real strides forward.