Costs for the 49 top-selling brand-name prescription drugs in the United States increased by a median 76% between 2012 and 2017, with all but one drug displaying regular annual or biannual price increases, according to an analysis of pharmacy claims data published in JAMA Network Open.

In an analysis of claims data from more than 35 million individuals, the researchers observed that 17 of the top-selling brand-name drugs — among them, nine diabetes therapies — more than doubled in cost over 6 years. These included insulin lispro (Humalog, Eli Lilly; 117%), regular and NPH insulin (Humulin, Eli Lilly; 117%) and insulin aspart (NovoLog, Novo Nordisk; 118%).

“We found that increases in prices among popular brand-name products is near-universal, occurring once or twice per year, and that how long a product has been on the market or if there are therapeutic equivalents or generics available had no discernible impact,” Nathan E. Wineinger, PhD, assistant professor in the department of integrative structural and computational biology at Scripps Research, California, told Endocrine Today. “Moreover, it appears the current rebate system is not sufficiently maintaining costs, as we found the prices paid are correlated with the net price after rebates.”

Wineinger and colleagues analyzed prescription-level pharmacy claims data from 2012 to 2017 via Blue Cross Blue Shield Axis, a database with information for more than 35 million individuals with private pharmaceutical insurance in the United States. Drugs included in the analysis exceeded $500 million in U.S. sales or $1 billion in worldwide sales, reached at least 100,000 total pharmacy claims and were covered under insurance for at least 3 years. Primary outcome was total price paid of each claim, including median sum of out-of-pocket and insurance costs paid by patients or insurers for common prescriptions annually and monthly. 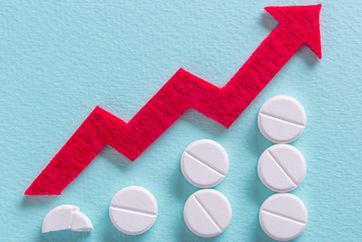 Costs for the 49 top-selling brand-name prescription drugs in the United States increased by a median 76% between 2012 and 2017.
Adobe Stock

Researchers found the median cost increase for the 49 top-selling drugs was 76% between 2012 and 2017, or 9.8% when compounded annually. Almost all drugs displayed regular or biannual price increases; only the hepatitis C treatment ledipasvir/sofosbuvir (Harvoni, Gilead Sciences; median cost per prescription, $30,920) decreased in cost during the study period, although no more than 1% annually, according to researchers.

Of the 36 top-selling drugs available since 2012, insurer and out-of-pocket costs increased by more than 50% for 28, whereas 16 drugs more than doubled in price.

The researchers noted that insulins and tumor necrosis factor (TNF) inhibitors demonstrated “highly correlated” price increases, coinciding with some of the largest growth in drug costs.

The researchers did not observe evidence of prices changes associated with the existence of therapeutic equivalents, they wrote.

“What was disheartening was our observation that prices among drugs that treat similar conditions (eg, insulins) had highly correlated price trends, more so than any other products,” Wineinger said in an interview. “At the same time, these drugs had some of the largest relative price increases. I would hope that competition, in this case among insulin manufacturers, would keep prices down. Instead it appears that competitors are responsive to one another, but not in a way that lowers prices for consumers.”

The researchers found that changes in prices paid were correlated with third-party estimates of changes in drug net prices, suggesting that the current drug rebate system increases overall costs, the researchers wrote.

“Seemingly biannual price increases should not be considered benign pricing strategies to offset paid against net price discrepancies in the current rebate system,” the researchers wrote. “Greater transparency is needed.” – by Regina Schaffer

Disclosures: The NIH funded this study. One of the authors reports he received personal fees from Blue Cross Blue Shield outside of this study.

While the sample study covers a wide range of therapeutic areas, there are notable drugs familiar to endocrinologists and important for treatment of diabetes. Drugs such as Trulicity (dulaglutide, Eli Lilly), Januvia (sitagliptin, Merck) and Victoza (liraglutide, Novo Nordisk) all increased in price by excess of 30%, with the latter two nearly doubling. However, caution is warranted, as the authors relied on a third-party database for estimates of rebates (ie, money paid to insurers from manufacturers for favorable drug placement). Rebates can be substantial, and one example from their study, Harvoni (ledipasvir/sofosbuvir, Gilead), suggests the data may not be highly accurate, since they suggest a net price decrease of 3%, but other sources peg this at 50% during a similar time frame.

For endocrinologists and physicians treating people with diabetes, an important takeaway is to look at the changes to patient out-of-pocket expenses because these are the costs the patient bears when filling a prescription. High patient out-of-pocket costs can lead to not filling a prescription, dose skipping or pill cutting. Medication adherence is crucial for chronic conditions such as diabetes. Further concerning is that similar drugs have prices that appear to increase in tandem. For example, there were similar price trajectories tracked for Novolog and Humalog, despite classic economic thinking suggesting competitors should drive down prices.

For physicians prescribing medication, exact knowledge of drug prices is not necessary; however, physicians need to know that a patient will be able to afford the medication prescribed. While the top-line numbers in this study should be treated with caution, the patient out-of-pocket expenses should be more accurate and more concerning for providers. Lastly, it is worth noting the importance of the last sentence of the study, which is a request for greater transparency. Neither patients nor providers know the post-rebate prices for drugs, and this, ultimately, impedes decisions based on cost or value.