Cases of newly diagnosed diabetes in the United States have declined 35% since the peak year of 2009, and the prevalence of the disease has remained stable for 8 years, with the trends reflected across all age, sex and racial groups, according to an analysis of National Health Interview Survey data.

“A number of factors can be driving the observed reduction in diagnosed diabetes incidence,” Stephen Benoit, MD, MPH, medical officer and team lead for surveillance in the CDC’s Division of Diabetes Translation, told Endocrine Today. “Lifestyle change interventions to prevent type 2 diabetes continue, such as the National Diabetes Prevention Program, as well as population approaches to improve healthy food availability, diabetes awareness and education, and walkability of communities. However, risk factors for diabetes, such as obesity and prediabetes, remain high, and since our analysis relies on diagnosed cases, the potential impact of changes in screening, testing and diagnostic thresholds are also important considerations.” 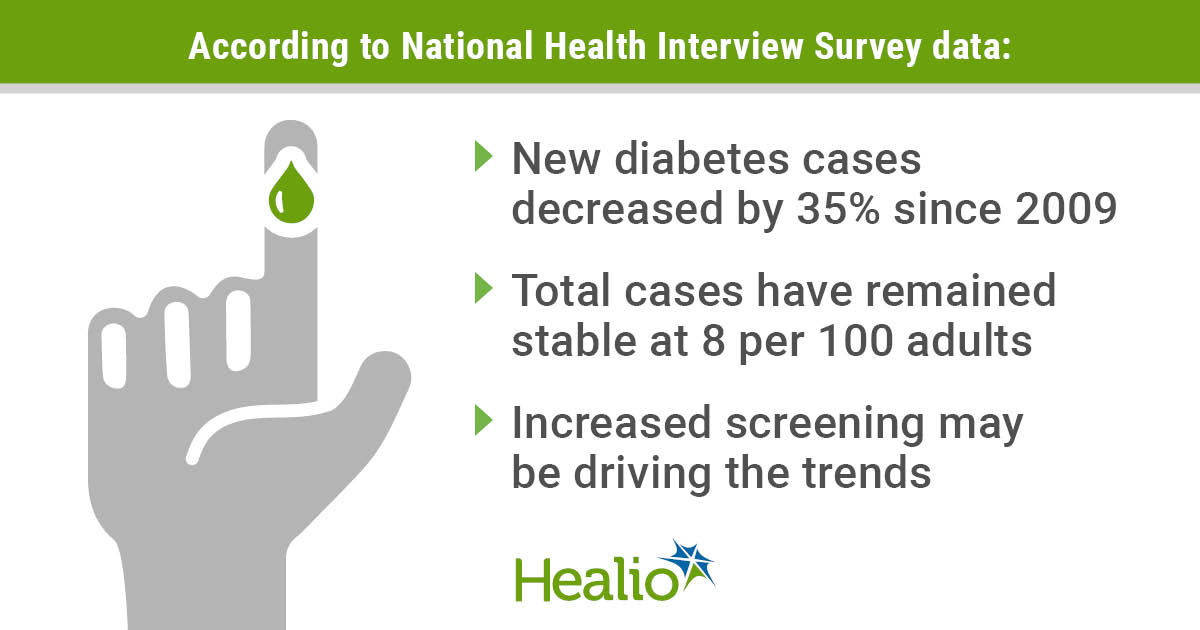 Cases of newly diagnosed diabetes in the United States have declined 35% since the peak year of 2009.

“The findings suggest that our work to stem the tide of type 2 diabetes may be working, but we still have a very long way to go,” Ann Albright, PhD, director of the division of diabetes translation at the CDC, said in a press release announcing the findings. “We must continue proven interventions and deploy innovative strategies if we’re going to see a continued decline in type 2 diabetes among Americans.”

Despite progress, the burden of diabetes remains high, Benoit said.

These data are interesting, and there is a lot behind the numbers here. What is strange is that you see an immediate drop in the diabetes incidence rate beginning in 2010 — not a slow decrease. It is like there is a tipping point and then a decrease, whereas the prevalence holds steady. Many things can explain these changes. Over time, we have diagnosed diabetes in many different ways, including fasting glucose with various cutoffs, and then later, around 2010, we started to use the HbA1c assay for diagnosis. This is not a very sensitive test, but it is an easy, simple way to diagnose diabetes for physicians, as it does not require fasting and is less hassle vs. an oral glucose tolerance test or fasting plasma glucose. However, the use of HbA1c assay is likely way underestimating the prevalence and the incidence of diabetes. Obesity, as we know, continues to rise, which does not match the diabetes trend despite being linked. That said, one can also make the argument on the other side of the aisle that we are diagnosing prediabetes more often than before, and at the same time, there is a major effort going on at all levels to take action, prevent diabetes and cut related costs. All of this can explain what we are seeing here.