Beginning today, an international athletic body will require that women with exceptionally high levels of testosterone use a hormonal contraceptive for at least 6 months if they wish to compete in races ranging from 400 meters to 1 mile, according to a spokesperson for the group.

The International Association of Athletics Federations, or IAAF, will begin enforcing eligibility regulations for female classification that were originally due to go into effect in November 2018 but were suspended pending a decision by the Court of Arbitration for Sport. According to the IAAF regulations, female athletes with a 46 XY disorder of sex development with a natural testosterone level above 5 nmol/L (144 ng/dL) and who experience a “material androgenizing effect” must reduce their natural testosterone level to below 5 nmol/L and maintain that reduced level for a continuous period of at least 6 months to be eligible to compete in so-called restricted events, which include international race events ranging from 400 meters to 1 mile. Such a reduction in testosterone can be achieved, according to the IAAF evidence, by the use of oral contraceptives.

The new rules will go into effect less than 5 months before the IAAF’s World Championships in Athletics, taking place Sept. 28-Oct. 6 in Doha, Qatar.

“Beginning May 8, if an athlete would like to be eligible for further competition in the restricted events, according to the rules, they should be able to prove that they have maintained their testosterone level below 5 nmol/L for 6 months,” Stéphane Bermon, MD, PhD, director of health and science for the IAAF, told Endocrine Today. “We have our world championships at the end of September this year, which is a bit less than 6 months from now. We have some exceptional measures for this event. If athletes started suppressive treatment and can show that by May 8, they already have testosterone levels below 5 nmol/L, and they maintain the testosterone level below 5 nmol/L until the championship event, then they could be eligible.” 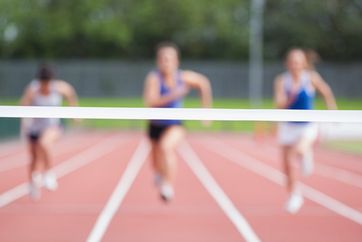 Beginning today, an international athletic body will require that women with exceptionally high levels of testosterone use a hormonal contraceptive for at least 6 months if they wish to compete in races ranging from 400 meters to 1 mile.
Adobe Stock

The court ruling was based on requests for arbitration filed by the South African athlete Caster Semenya and Athletics South Africa against the IAAF in June 2018 concerning the associations’ eligibility regulations. Semenya and Athletics South Africa requested that the disorders of sex development regulations be declared invalid and void with immediate effect, arguing they were “discriminatory, unnecessary, unreliable and disproportionate.” The IAAF, for its part, contended that the regulations do not infringe on any athlete’s rights, including the right to equal treatment, but instead are a justified and proportionate means of ensuring consistent treatment and preserving fair and meaningful competition within the female classification.

“There is no dispute that there should be a separate classification for female athletes — a binary divide between male and female,” the court stated in the release.

The eligibility rules have been repeatedly questioned by some endocrinologists, who have called into question the IAAF’s evidence linking higher levels of testosterone with a performance advantage, as well as the ethics of such a decision.

“I was surprised by the court’s decision,” Endocrine Today Editorial Board Member Tamara Wexler, MD, PhD, a neuroendocrinologist and reproductive endocrinologist, and clinical assistant professor in the department of rehabilitation medicine at NYU Langone Medical Center in New York, said in an interview. “The new evidence commissioned by the IAAF in response to an earlier request by the court (when they overturned the IAAF 2011 eligibility regulations) does not appear to meet the court’s request for a ‘significant performance advantage’ greater than 3%, nor does the IAAF study meet the bar for scientific evidence of a causal relationship. There was no strong evidence for a causal relationship between high testosterone levels and athletic performance to a significant degree.”

Still other endocrinologists have noted that the regulations were fair and carefully done. Andrea Dunaif, MD, professor of medicine and chief of the Hilda and J. Gabrilove division of endocrinology, diabetes and bone disease at the Icahn School of Medicine and the Mount Sinai Health System and an Endocrine Today Editorial Board Member, said that the court’s decision “supported that there is biologic reality.”

“We clearly know that testosterone is the biological mediator of major sex differences that confer athletic advantage, such as muscle bulk, strength and fiber type, as well as blood oxygen carrying capacity,” Dunaif said in an interview. “Certainly, there is tremendous genetic variation in other attributes that confer performance advantages, but we currently cannot isolate the mediators down to a single factor like testosterone levels.

Perhaps there will be a day when all sorts of athletic-enhancing variation is selected out in competitive sport For now, testosterone is a pretty clear thing to go after.”

In announcing its ruling, the court found that the disorders of sex development regulations are discriminatory; however, the majority of the panel found that, on the basis of the evidence submitted by the parties, such discrimination is “a necessary, reasonable and proportionate means of achieving the IAAF’s aim of preserving the integrity of female athletics in the restricted events.”

The court panel noted that it held “serious concerns” as to the future, practical application of the regulations. The court highlighted three key issues, including the difficulties of implementing the regulations in the context of a maximum permitted level of testosterone and the consequences of unintentional noncompliance, as well as the difficulty of relying on concrete evidence of actual (in contrast to theoretical) significant athletic advantage by a sufficient number of relevant athletes in the 1,500 meter and 1 mile events. The panel suggested that the IAAF consider deferring the application of the regulations to these events until more evidence is available.

The panel also cited the potential side effects of hormonal treatment, experienced by individual athletes, which could demonstrate the practical impossibility of compliance.

“The [Court of Arbitration for Sport] panel was restrained in its task, due to the strict framework of the arbitration, to solely determine whether the [disorders of sex development] regulations were invalid or not,” the court stated in the release.

Wexler said she believed the court’s decision will not mark the end of the controversy for the organization.

“It does seem as if it opens the IAAF to even stronger questions about the reason for these regulations, given that there is not a 1:1 link between even their own study results and the regulated, restricted events,” Wexler said, referring to the restriction of events that did not show an association with higher testosterone levels while not restricting other events that showed the stronger performance advantage. “In addition, the 5 nmol/L threshold was selected to exclude certain conditions, but not others. I find it troubling that there is not more transparency or discussion about this study, yet it is being used as a basis for far-reaching policy.”

Bermon said he was pleased with the court’s decision.

“We still believe that science and medicine is to be the center of such decisions,” Berman said. “You can also discuss sociology and gender issues, but we believe that eligibility in sports has to rely on science when you discuss male and female categories. This is important to emphasize. The line you draw to make a male-female division in sports must be based on biological sex, not on legal or perceived gender. Some would prefer to rely on social gender. We are relying on biological sex because that is what matters in athletic performance.” – by Regina Schaffer

Disclosures: Bermon is director of health and science for the IAAF. Dunaif and Wexler report no relevant financial disclosures.