LOS ANGELES — Medications, supplements, excessive iodine intake and other exogenous substances including endocrine-disrupting chemicals can influence multiple thyroid effects that clinicians should recognize, including thyroid dysfunction and altered thyroxine absorption, according to a speaker at the AACE Annual Scientific and Clinical Congress.

Several commonly used drugs and popular over-the-counter supplements, as well as newer cancer treatments such as immune checkpoint inhibitors, can interfere with thyroid function test measurement and thyroid hormone metabolism, disrupt the thyroid axis and even trigger autoimmune thyroid disease, Gregory A. Brent, MD, professor of medicine and physiology in the division of endocrinology at the David Geffen School of Medicine at UCLA, said. Popular OTC dietary supplements such as biotin, a water-soluble vitamin often marketed for hair and nail growth, can interfere with a range of thyroid assays that rely on the interaction of biotin and streptavidin, Brent said.

“Biotin, a nutritional supplement used by many, can interfere with thyroid function tests and other hormone assays,” Brent told Endocrine Today. “Patients who have ingested large amounts of biotin may have abnormal test results that look like thyroid disease, but the disease is not present.”

In these patients, cessation of biotin for 1 to 3 days can rapidly reverse the interference and thyroid function tests should return to normal, Brent said.

Other commonly prescribed therapies, such as glucocorticoids, dopamine or the vitamin A derivative bexarotene, can inhibit or block thyroid-stimulating hormone release or suppress pituitary TSH-beta promoter, Brent said.

Several agents and conditions have an impact on levothyroxine therapy and the interpretation of thyroid tests, Brent said, including common drugs like proton pump inhibitors, ferrous sulfate and calcium salts, which can interfere with drug absorption. The food or drink a patient consumes with the levothyroxine therapy — for example, milk and coffee — can also impact absorption, he said.

“Thyroxine is best absorbed in an acidic environment, so anything you do that raises the gastric pH will affect dissolution of the levothyroxine tablet,” Brent said.

Cancer treatment, particularly the newer immune checkpoint inhibitors, is associated with a wide range of endocrine disorders, and the thyroid is the most commonly affected, Brent said.

“The new immune checkpoint inhibitor chemotherapies have a high incidence of endocrine dysfunction, and the most common is hypothyroidism,” Brent said in an interview.

The cytokine interleukin-2 often causes thyroid dysfunction, with the induction of thyroid antibodies occurring in 10% to 60% of patients with cancer treated, Brent said. Similarly, tyrosine kinase inhibitors (TKIs) expose patients with cancer to higher risk for developing TKI-related hypothyroidism, observed in 14% to 71% of treated patients in prospective studies. TKIs are also thought to act directly on the thyroid and induce destruction, Brent said. Monoclonal antibodies that target PD-1 have the highest incidence with respect to endocrine complications, Brent said.

“There is a wide range which is now recognized and monitored that we are seeing,” he said. “Many of these therapies are being used in combinations. ... This makes [the risk for thyroid dysfunction] go even higher.”

Brent said endocrinopathies can develop at any time when a patient is being treated with an immune checkpoint inhibitor, but typically surface in the first few months of therapy.

Endocrine-disrupting chemicals (EDCs), defined as substances in the environment, food and consumer products that interfere with hormone biosynthesis, metabolism or action, act through classic nuclear receptors, including thyroid receptors, and have been associated with thyroid dysfunction, Brent said. Many EDCs, such as polychlorinated biphenyls (PCBs), are fat soluble and have a long half-life, meaning the chemicals remain in the environment for years, even after they are banned by governments, Brent noted. 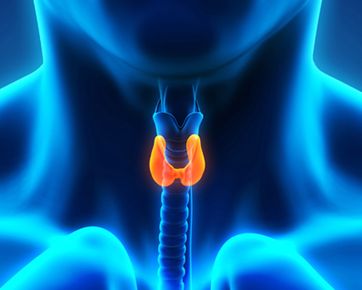 Brent said EDCs like ammonium perchlorate, a chemical used as an oxidizer in solid propellants for rockets and fireworks that readily enters water supplies like the Colorado River, blocks iodine uptake and has been associated with neonatal goiter as it crosses the placenta during pregnancy. Even a seemingly innocuous drink like kale juice, Brent noted, can inhibit iodine uptake by the thyroid if consumed in large enough amounts due to excessive exposure to thiocyanate.

“Patients who think they might be eating healthy are actually blocking iodine,” Brent said, which can lead to thyroid dysfunction.

Brent added that pregnant and lactating women should also avoid exposure to excess nitrate, which would usually occur from contaminated water, and thiocyanate. Clinicians should advise these women to take iodine supplements to protect them from the environmental contaminants that interfere with iodine concentration, he said. – by Regina Schaffer