Among adults who lost at least 5% of baseline body weight in the first year of the landmark Diabetes Prevention Program study, those who were assigned to metformin therapy maintained greater weight loss between years 6 and 15 when compared with participants assigned to intensive lifestyle intervention or placebo, according to a post hoc analysis published in the Annals of Internal Medicine.

“We concluded that, although lifestyle therapy was initially superior for weight loss in the Diabetes Prevention Program (DPP), metformin appeared to be more effective for weight-loss maintenance,” Kishore Gadde, MD, the Fairfax Foster Bailey endowed chair in heart disease prevention and medical director of clinical services at Pennington Biomedical Research Center at Louisiana State University, told Endocrine Today. “This finding became more and more prominent as the years went by. There was something striking about it.”

Gadde and colleagues analyzed data from 1,066 participants across 27 clinics who lost at least 5% of their baseline body weight in the first year of the DPP, a randomized controlled trial that compared weight loss with metformin (850 mg twice daily), intensive lifestyle intervention (16 behavior modification sessions over 6-8 months) or placebo among adults with prediabetes and overweight or obesity between 1996 and 2001. After the masked treatment phase ended, researchers followed participants in the ongoing DPP Outcomes Study (DPPOS), which began in 2002, through 2013. Researchers used fixed-effects models to determine the percentage of weight loss over time and generalized estimating equation models to determine the percentage of participants with long-term weight loss among those who lost at least 5% body weight in the first year. Researchers used logistic regression models to evaluate predictors of medium-term (5 years), long-term (10 years) and very long-term (15 years) weight loss.

The researchers also noted that cumulative diabetes incidence rates during 15 years of follow-up were lower among those who lost at least 5% of their body weight in the first year.

The researchers found that independent predictors of long-term weight loss included greater weight loss in the first year across all groups; older age and continued metformin use in the metformin group; older age and absence of diabetes or a family history of diabetes in the lifestyle intervention group; and higher baseline fasting plasma glucose levels in the placebo group. 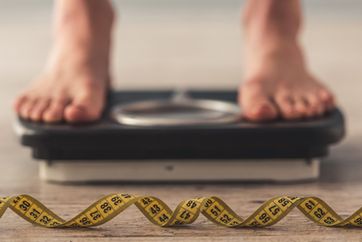 “If you are someone who loses 5% with metformin, you are maintaining that weight loss for a very long period,” Gadde said in an interview. “Metformin is not for inducing initial weight loss. Future investigations should focus on whether we could get people to lose weight with a dietary intervention or prescription weight-loss agent ... to get a jump start, and then maintain those people on metformin. It is an attractive drug because it is inexpensive and safe.”

The mechanisms that contribute to metformin’s effects on body weight are not well-understood, Gadde said, who noted that decreases in appetite and food intake with metformin have been reported in some, but not all, studies.

“We don’t know (the mechanism),” Gadde said. “It may modulate hypothalamic appetite regulatory centers. It may affect the signaling of how the appetite is controlled. It could be working by altering the gut microbiome. It could also be reversing the consequences of aging.”

In commentary accompanying the study, Leslie I. Katzel, MD, PhD, and John D. Sorkin, MD, PhD, both of the University of Maryland School of Medicine in Baltimore, noted that several limitations must be considered when evaluating the study results. Interpretation of the percentage of patients who achieved and maintained 5% weight loss is difficult because of regression to the mean, they wrote, whereas the number of patients in the lifestyle and placebo groups who received metformin increased over time, and adherence to therapy in the metformin group fell from 72% during the DPP to 49% in the DPPOS.

“Although a greater proportion of participants in the metformin group maintained weight loss of at least 5% over the 15-year follow-up, more participants lost at least 5% in the [intensive lifestyle] group because a larger number in this group met the weight-loss goal in the first year, despite a lower retention rate,” Katzel and Sorkin wrote. “In addition to the limitations mentioned earlier, this prevents the current study from answering the question of which therapy is better over the long term.”

Katzel and Sorkin added that, for now, clinical judgment should be used to decide whether metformin should be added when lifestyle intervention does not succeed or when the patient subsequently regains the weight they lost. – by Regina Schaffer