Pennsylvania state legislators and diabetes advocates gathered at the statehouse recently to raise awareness about the rising incidence of type 1 diabetes in young children and the dangers that can accompany a missed diabetes diagnosis, including diabetic ketoacidosis.

“Most parents are not aware that children under the age of 5 years develop type 1 diabetes. Diabetes is often not part of primary care providers’ differential diagnosis when evaluating very young children who are ill,” Terri H. Lipman, PhD, CRNP, FAAN, assistant dean for community engagement, the Miriam Stirl endowed term professor of nutrition and professor of pediatric nursing at the University of Pennsylvania School of Nursing, told Endocrine Today. “But very young children do develop type 1 diabetes and the incidence is markedly increasing.” 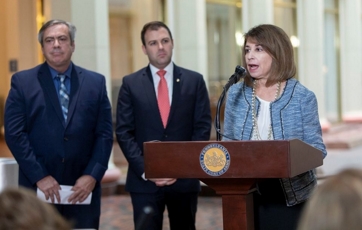 Speaking at a press conference in Harrisburg, Pennsylvania, on Nov. 13 to promote diabetes awareness, Lipman joined Sen. Pat Browne and Rep. Ryan Mackenzie to discuss the growing impact of type 1 diabetes on people of all ages, with an emphasis on avoiding missed diagnoses in young children.

“Rapid and timely diagnosis of diabetes can avoid diabetic ketoacidosis, the No. 1 cause of death in children with diabetes,” Lipman said in an interview after the press conference.

Since 1990, Lipman has maintained the Philadelphia Pediatric Diabetes Registry, a participating center in the WHO’s 10-year Multinational Project for Childhood Diabetes - the DIAMOND (Diabetes Mondiale) project, a consortium of 150 centers in 70 countries.

“We have shown that the incidence of type 1 diabetes has increased steadily across the time of the registry in all age and racial groups, but most markedly in children under the age of 5 years. T incidence has doubled in that group of children over the course of the registry,” said Lipman, also a nurse practitioner in diabetes and endocrinology in the division of diabetes and endocrinology at Children’s Hospital of Philadelphia. “The increase of diabetes in that age group is of major significance because children under the age of 5 years are at highest risk for morbidity and mortality at the time of diagnosis.”

A push for universal screenings in this population would be difficult and not recommended, Lipman said

“When we say screening, how are we screening?” Lipman said. “Screening tests are used to determine whether those who are asymptomatic have an undetected condition. If we were to do universal screening of blood or urine glucose levels, children at risk for diabetes would be difficult to diagnose with a random screen. Children with diabetes would not be identified until 90% of their islet cells are destroyed and they develop hyperglycemia. Therefore, a children at risk could be screened and have a normal glucose level and, thereafter, be diagnosed with diabetes. The timing of the beginning of hyperglycemia is variable and the prodrome between the onset of the autoimmune process and hyperglycemia is protracted and unpredictable.

The best option, Lipman said, is to raise awareness among primary care providers and families to be alert for the signs and symptoms of type 1 diabetes, and to consider diabetes when children present with an acute illness.

“Testing children who present with an acute illness, particularly those who have a a family history of diabetes or autoimmunity, is more feasible than universal screening and will be more effective at preventing delayed diagnoses,” Lipman said. “A urine test, which is easy and noninvasive, will show if there is glucose in the urine and further evaluation is needed. It is reasonable to say that diabetes should be part of the differential diagnosis, but universal screening would not yield the outcome that we would be looking for in terms of identifying children at risk.”

Browne is the sponsor of Pennsylvania Senate Resolution 484, which recognized November 2018 as “National Diabetes Month” in Pennsylvania. The resolution was unanimously adopted by the Senate on Oct. 17.

“For those who’ve been diagnosed, diabetes impacts nearly every decision they make daily — from what they’ll eat, wear, do and how they’ll take care of themselves,” Browne said in a press release. “The 24/7 burden of diabetes management is often misunderstood. This awareness campaign is intended to demonstrate the everyday reality of diabetes from the point of view of people living with diabetes or caring for someone with diabetes.”

Mackenzie introduced House Resolution 569, a measure unanimously adopted by the House in November 2015, which urged all Pennsylvanian health care practitioners to educate and discuss the warning signs and symptoms of type 1 diabetes with the patients or guardians of each child under their care.

“Educating the public about diabetes is vital and individuals must be aware of the measures they can take to avoid the disease and to take effective measures if they do fall victim to it,” Mackenzie said in the release. “The symptoms of diabetes can resemble other conditions or medical problems so it is important that patients seek medical attention as soon as possible in order to take steps to bring it under control.”