CHICAGO — An oral contraceptive pill containing dimethandrolone undecanoate was safe when used for 28 days in healthy men, with no evidence of serious adverse events or significant changes in mood, sexual function, vital signs or heart function, according to new data presented here.

The double blind study enrolled 100 healthy men aged 18 to 50 years at two U.S. sites. Men were randomly assigned to daily oral placebo or dimethandrolone undecanoate (DMAU) with food in one of three dose groups (100 mg, 200 mg or 400 mg) and one of two formulations (castor oil/benzyl benzoate or powder in capsule; n = 15 in each group). The goal was to determine the safety, tolerability, pharmacokinetics and pharmacodynamics of oral DMAU over 28 days. On days 1 and 28, the men underwent 24-hour pharmacokinetic studies with hourly vitals and serial blood DMAU/dimethandrolone (DMA) and hormone measurements as well as bi-weekly ambulatory visits in between for safety labs, hormones and drug levels.

Treatment appeared to have no effect on mood, sexual function, vital signs or electrocardiogram results.

Compared with placebo, all active DMAU groups experienced decreases in HDL cholesterol (median, –7 mg/dL to –17 mg/dL) and increases in hematocrit (median range, 0.2% to 2%) and weight (median range, 1.5 kg to 3.9 kg). 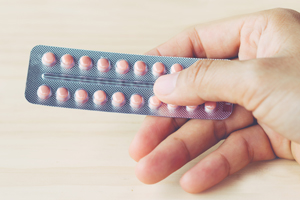 An oral contraceptive pill containing dimethandrolone undecanoate was safe when used for 28 days in healthy men, according to a presenter here.
ShutterStock.com

DMAU is a pro-drug that is converted to DMA, which has been shown to bind to androgen and progesterone receptors, suppress gonadotropins, maintain androgenic effects and inhibit spermatogenesis.

“These properties make DMAU a promising step forward in the development of an oral, reversible contraceptive for men; in other words, the first ‘male pill,” Page said in an interview. “DMAU is a unique androgen with both androgen and progestin activity. In addition, oral DMAU appears to lack hepatoxicity, which is a problem with oral methyltestosterone, is likely to be effective with once-daily dosing and is fully reversible. These are all critical components of an effective, user-friendly male pill.”

The new data build on a first-in-man study of single doses of oral DMAU in 200 to 800 mg were well tolerated and suppressed serum luteinizing hormone.

“Longer-term studies demonstrating that daily dosing of DMAU suppresses spermatogenesis are currently underway in collaboration with our co-investigators at LA BioMed at Harbor-UCLA as part of the National Institute of Child Health and Human Development-supported Male Contraceptive Clinical Trials Network,” she said. “Eventually, larger studies demonstrating the safety of prolonged use of DMAU will be necessary.”

A longer-term, 3-month study is set to begin in April with new participants to further assess safety and the effect on sperm suppression, Page said. – by Amber Cox

This study highlights a meaningful advance in the development of a male contraceptive method that will provide a safe, effective and reversible option. The investigators have identified a daily dosing regimen of a pro-drug that is converted to a hormone with both androgenic and progestogen activity that significantly suppresses the peptide hormones controlling testosterone production. Although testosterone levels were in the hypogonadal range and a few men reported mild decrease in libido, there was no loss of sexual function or changes in mood. Also, other indicators of adequate androgenic action were present, such as mild weight gain or acne in some men, all of which readily resolved. This study builds on previous animal study data and a single-dose oral administration study in men, all of which have indicated that this method is well tolerated and safe and has a good potential as a single-agent contraceptive. Hormonal methods for male contraception should have a shorter path to market than non-hormonal methods involving compounds inhibiting sperm production, sperm function or fertilizing capacity, as the specificity and mechanism of action of administered hormones is well understood. An oral method may also be more acceptable than daily administration of a gel or patch. Longer-term studies, including for effects on sperm production, are eagerly awaited.