Steroid use among recreational athletes as dangerous as doping among professionals

In recent years, news headlines about professional athletes, notably cyclists and baseball players, have brought attention to the ongoing problem of doping in professional sports. Likewise, Olympic athletes from around the world have been disqualified for using performance-enhancing drugs in various sports.

Amid these high-profile cases at the professional level, another significant issue with performance-enhancing drugs has gone largely unrecognized: the abuse of these agents by recreational athletes. In these cases, drugs such as anabolic steroids or androgen-replacement drugs may be used to increase bodybuilding strength, improve performance in non-elite competitive sports or develop a more muscular physical appearance. According to a 2017 study published in JAMA, more than 90% of products sold online as selective androgen receptor modulators contained unapproved substances and drugs. Additionally, anabolic steroids and androgen-replacement drugs are sometimes prescribed by physicians, whose authorization reinforces the abusers’ perception that their use of  these drugs is legitimate.

“There’s a lot of money being made on androgens, both at the professional and the recreational level, by the physicians who prescribe them,” Richard J. Auchus, MD, PhD, professor of internal medicine, division of metabolism, endocrinology and diabetes at the University of Michigan Health System, told Endocrine Today. “Many of these clinics don’t take insurance, and plenty of people pay out-of-pocket for the doctor to provide these drugs. So, it’s pretty much the exact same thing as happened with narcotics. The entire history of narcotic abuse has also occurred with androgen abuse.”

Although the issue of androgen abuse among elite athletes has commanded more public attention recently, the misuse of these drugs is just as prevalent in the general population, if not more so, Auchus said. Although a higher percentage of elite athletes use performance-enhancing drugs, professional athletes represent only a small absolute number of people.

The years of abusing these drugs could begin to take its toll on these patients as they age, Auchus said. 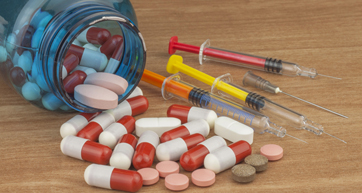 Headlines about professional athletes, notably cyclists and baseball players, have brought attention to the ongoing problem of doping in professional sports as well as in recreational athletes.
Shutterstock.com

“Now we have this whole population of people who have been abusing androgens for years, who are now reaching middle age, and it’s a time when the health consequences are going to become apparent,” he said. “It’s a looming problem, and there’s not a good plan for how to deal with it.”

Issues of over diagnosis, overtreatment

In prescribing androgens to recreational athletes, physicians frequently disregard the FDA guidance for their use, Auchus said.

He said physicians often overdiagnose idiopathic hypogonadotropic hypogonadism, which essentially is low testosterone. This is typically a reversible state, and does not necessarily mean anything is intrinsically wrong.

“There are a lot of factors that will lower testosterone, and that doesn’t mean you have a medical condition,” Auchus said. “Overtraining itself, poor sleep and drugs are a few of many things that can lower testosterone. Lowering of testosterone is reversible if you change the habits.”

In addition to prescribing androgens to non-elite athletes and bodybuilders seeking a more muscular look, physicians also sometimes prescribe these medications within the setting of “anti-aging clinics,” Auchus said. These clinics often claim to offer improved stamina and athletic performance to older men.

“A lot of these clinics just give men androgens, without a legitimate medical indication,” he said. “These patients who are involved in this practice are basically doping, while in their mind, they’re just taking medicine that a doctor prescribed because they have what they think is a disease. It becomes a difficult problem to address because a lot of these patients are being told by members of the medical profession that they should take testosterone.”

One major demographic of anabolic steroid and androgen abusers is patients with a psychiatric condition known as muscle dysmorphia. A subtype of body dysmorphic disorder, muscle dysmorphia is characterized by a patient — typically male — with a distorted body image. Although individuals with muscle dysmorphia may be muscular or large in size, they perceive that they are too thin or scrawny, according to Roberto Olivardia, PhD, clinical psychologist and lecturer in psychology in the department of psychiatry at Harvard Medical School.

“When they look in the mirror, they do not see what other people objectively see,” Olivardia told Endocrine Today. “As a result, they have a lot of obsessive thinking around their body image and, often, a lot of compulsive behavior.”

These compulsions could include frequent mirror-checking, compulsive exercise, compulsive dietary habits and the use of anabolic steroids. Contrary to what one might think, these are not the men who might show off their physiques on the beach, Olivardia said.

“They don’t want to take their shirts off at a beach or pool,” he said. “They have very fit bodies, but they just don’t see it.”

For these patients, self-worth is constructed around their muscularity, and failure to achieve this muscular ideal leads to feelings of worthlessness, according to Olivardia. Many of these patients have dealt with traumas, such as physical or sexual abuse or bullying, and may use the “armor” of a muscular body to project strength, he said.

“I work with a lot of men who feel intimidated or weak on a number of levels, and being big is very tied to how they look at their masculinity,” he said. “I’d say probably one common trait of every male that I’ve worked with who had muscle dysmorphia is that they don’t have a very secure sense of their masculinity.”

Approximately 50% of patients with muscle dysmorphia will use anabolic steroids at some point, Olivardia said, and similar to a diet pill that expedites weight loss, these drugs help them achieve the size they want with less effort.

“Anabolic steroids work in the sense that they build muscle mass at a relatively quicker rate with less effort than if you weren’t using them,” Olivardia said. “The problem, of course, is that there’s a whole host of physical and psychological consequences, which many of the men I treat have experienced.”

According to Auchus, the excessive and ongoing use of testosterone replacement and anabolic steroids can lead to serious adverse effects. Oral androgens can have effects that endogenous testosterone does not.

“Oral androgens can cause severe liver damage, between anything from hepatic necrosis to just hepatitis to formation of venous lakes in the liver,” Auchus said. “There are psychiatric effects, of course; the aggression, the rage — of course, there’s also the depression and the lassitude that occurs when they withdraw from it.”

Issues such as infertility, sexual dysfunction, hair loss and gynecomastia may also occur with excessive, prolonged use. For patients who are seeking an ideal of masculinity, these effects may be particularly unsettling.

“It causes other body image issues,” Olivardia said. “Some of the steroids can actually have a feminizing effect on men because they shut down a man’s natural cycle of testosterone production after a while.”

However, these effects are relatively small when compared with some of the more dangerous long-term risks associated with these drugs. The use of steroids has been linked to cardiomyopathy in otherwise healthy individuals, Auchus said.

“Just as their muscles get bulky, their heart gets bulky, and so they have diastolic dysfunction and impaired contractility as a result of that,” he said.

As these patients age and possibly develop other impairments to heart function, these steroid-induced heart conditions can exacerbate overall cardiac risk for them.

“As these people get older and have other compromises to their cardiac function, and you add to that hypertension and vascular disease, you can have a setup for someone to go into congestive heart failure and have a pretty high-morbidity medical state for the rest of their lives,” Auchus said.

As with any other psychiatric condition, muscle dysmorphia exists along a continuum of severity. In more severe cases, patients may repeatedly look in the mirror, exercise compulsively and adhere to a strict dietary regimen. These patients tend to be the ones who seek out androgens and may ultimately develop a psychological dependency.

Although the idea of physical addiction to androgens remains a controversial issue, Auchus cited animal studies in which mice showed similar addictive responses to androgens as they had shown in studies of dopamine.

In another set of trials, the Testosterone Trials of 2016 published in The New England Journal of Medicine, researchers evaluated 790 men aged 65 years and older with testosterone less than 275 ng/dL and symptoms suggestive of hypoandrogenism. These patients were randomly assigned to testosterone gel or placebo for 1 year, and researchers compared their performance in three parameters: sexual function, physical function and vitality.

“If you look at the vitality parameter, there was a significant increase, but it was exactly the same as in the placebo group,” Auchus said. “It was all placebo effect. They may have felt that their performance was better with the testosterone, but that’s because they essentially were doping, and that’s what happens when you dope.”

Although regulations are certainly in place to stop the abuse of androgens and anabolic steroids, federal agencies do not have the time or resources to make this problem a top priority, Auchus said.

“We have the opiate epidemic that is consuming the enforcement agencies, and androgens are not high enough on their radar screen. Prosecuting these people takes a lot of time, money and effort,” he said. “I don’t think there is enough publicizing of the bad events, the potential tragedies from androgen abuse. That needs to be brought to the public’s attention more directly.” – by Jennifer Byrne

Disclosures: Auchus reports he is a consultant to the U.S. Anti-Doping Agency. Olivardia reports no relevant financial disclosures.