In the United States and the United Kingdom, the number of pharmaceutical prescriptions, primary care physician contacts and hospital admissions increase consistently with higher BMI categories, according to an analysis of electronic medical records data from the two countries.

“The use of new ‘big data’ technologies to perform advanced analytics on very large datasets has allowed researchers to gain insights into the behavior of real-world populations that were previously time-consuming, costly or infeasible,” Emil Nørtoft, senior health economics outcomes research manager for Novo Nordisk, and colleagues wrote. “The aim of this study is to analyze the impact of increasing BMI on health care utilization (hospitalizations, PCP contacts and prescriptions) using large population-based EMR data from both the United Kingdom and the United States. This study is one of the first that combines EMR databases from both the U.K. and the U.S., analyzing both intra- and inter-country differences in the impact of increasing BMI on health care utilization.”

Nørtoft and colleagues analyzed data from the U.K. Clinical Practice Research Datalink (n = 1,878,017) and U.S. General Electric Centricity database (GE; n = 4,414,883) of adults with a registration date before Jan. 1, 2010. Each patient was followed from an individual baseline date (latest date of BMI measurement between Jan. 1, 2008, and Jan. 1, 2010) until death or Sept. 30, 2014. Researchers analyzed differences between individuals with obesity (BMI 30 kg/m²) and without obesity on 5-year rates of PCP contacts, prescriptions and hospitalizations.

The researchers noted that the findings underscore a “real need” to increase the availability and effectiveness of current obesity treatments to drive down the current increase in health care utilization.

“This is the first time that these associations have been described in two large EMR data sets utilizing identical methods,” the researchers wrote. “The results illuminate the striking consistency in the impact of obesity on health care utilization across two very different health care systems.” – by Regina Schaffer

Disclosures: Novo Nordisk funded this study. All authors report they are employees and shareholders of Novo Nordisk. 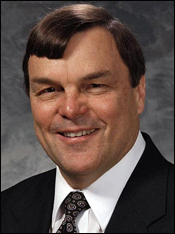 The findings in this paper are not a huge shock. What it shows is that people who are above the optimal BMI range of 18.5 kg/m² to 24.9 kg/m² will begin to have more problems: more prescriptions filled, seeing the doctor more often and more hospitalizations. These kinds of things have been identified previously, but never at this level, and never with this many people and over a reasonable period of time. For policy decisions, these findings are very important. Politicians and policymakers have to recognize that obesity is a serious disease that is costing the world, and in particular these two countries, very large amounts of money. It is very hard to ignore. It is two data sets from two different countries, with massive numbers of people. From our perspective, the people who work at NIH and the NHS in the U.K. should realize that what they are doing is not working. This should be a wake-up call to the people who fund obesity research to say that we are not succeeding. When it comes to obesity, it is time to step back and do something different.