Variables related to hyperglycemia and blood pressure were largely responsible for diabetes-associated decrements in cognitive performance, according to researchers in the Netherlands.

“It has become evident that type 2 diabetes, the most common form of diabetes, as well as its precursor, prediabetes, are associated with a variety of cognitive changes, ranging from subtle cognitive decrements to frank dementia,” Stefan L.C. Geijselaers, of the department of internal medicine at Maastricht University Medical Centre, Maastricht, Netherlands, and colleagues wrote. “The prevalence of these diabetes-associated cognitive problems is expected to rise dramatically as a result of the ongoing diabetes epidemic and the increasing life expectancy of individuals with diabetes, which highlights the need for preventive strategies. The exact mechanisms underlying diabetes-associated cognitive problems remain, however, incompletely understood, although metabolic and vascular factors are often considered to be involved.”

The researchers reviewed cross-sectional data from 2,531 participants from the Maastricht Study, an ongoing population-based cohort study of type 2 diabetes. All patients underwent a battery of neuropsychological tests. The participants’ mean age was 60 years. Most (52%) were men, and 666 had type 2 diabetes. Geijselaers and colleagues used linear regression analysis to estimate mediating effects of hyperglycemia, insulin resistance and BP on cognitive performance.

Although lower cognitive performance was generally associated with poorer glucose metabolism, the researchers reported that worse cognitive performance became statistically significant only when patients had type 2 diabetes (mean differences in z score, –0.087 for memory; –0.196 for processing speed; –0.182 for executive function and attention; P < .032 for all).

Hyperglycemia was most responsible for diabetes-associated differences in the participants’ executive function and attention (mediating effect, 50.3%; 95% CI, 0.6-101.2) and processing speed (79.6%; 95% CI, 36.6-123.4), Giejselaers and colleagues wrote. BP-related variables influenced processing speed “to a lesser extent,” the researchers reported (17.7%; 95% CI, 5.6-30.1). However, none of the factors included in the study explained diabetes-associated differences in memory function.

“Although the cognitive decrements we observed are unlikely to cause clinically manifest neurocognitive symptoms, they may lead to complains of forgetfulness and concentration loss, highlighting the need for preventive strategies and neuropsychological training or counseling,” the researchers wrote. “We believe that our findings suggest that the prevention of diabetes-associated decrements in cognitive performance should focus on early glycemic and BP control, that is, before the diabetes becomes apparent. As such, our data add fuel to the debate as to whether individuals with prediabetes should be monitored and treated more intensively.” – by Andy Polhamus 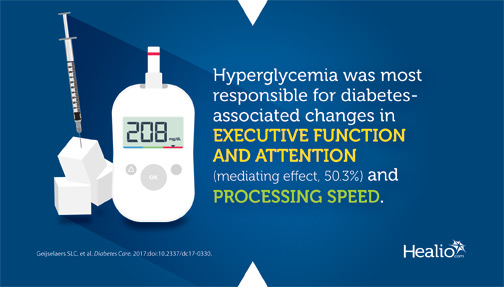