Age-standardized diabetes prevalence in adults has increased — or at best remained unchanged — in every country since 1980, leading to a near quadrupling of adults with diabetes worldwide, according to an analysis of hundreds of population-based studies.

“An aging population and rising levels of obesity mean that the number of people with diabetes has increased dramatically over the past 35 years,” Majid Ezzati, MEng, PhD, chair in global environmental health at Imperial College London, said in a press release. “Rates of diabetes are rising quickly in China, India and many other low- and middle-income countries, and if current trends continue, the probability of meeting the 2025 UN global target is virtually nonexistent.”

Ezzati and researchers from the NCD Risk Factor Collaboration analyzed data from 751 population-based studies, including 4,372,000 adults from 146 countries, that collected diabetes data through biomarker measurements. Researchers used a Bayesian hierarchical model to estimate trends in diabetes prevalence worldwide from 1980 to 2014, defined as a fasting plasma glucose of 7 mmol/L or higher, a diabetes diagnosis or use of insulin or antihyperglycemic drugs. Researchers also calculated the probability of meeting the global diabetes target: Stopping the rise in the prevalence of diabetes at its 2010 levels by 2025.

Researchers found that half the adults with diabetes in 2014 lived in five countries: China, India, the United States, Brazil and Indonesia; these countries also account for half the world’s population.

“Although the top three countries on this list remained unchanged from 1980 to 2014, the global share of adults with diabetes who live in China and India increased, in contract with the USA, where the share decreased,” the researchers wrote.

The researchers noted that, if the post-2000 trends continue, the probability of meeting the global diabetes target is less than 1% for men and 1% for women.

In commentary accompanying the study, Etienne G. Krug, MD, MPH, director of the Department for Management of Noncommunicable Diseases, Disability, Violence and Injury Prevention for the World Health Organization in Geneva, Switzerland, wrote that prevalence estimates “sound the alarm” for large-scale, effective action to reduce the health and economic impact of diabetes.

“Improvements in prevention and management, together with better surveillance, should be prioritized in response to this call,” Krug wrote.

The study was released ahead of the WHO’s annual World Health Day, April 7, which this year included a global call for action on diabetes. The global report on diabetes is part of a larger effort aimed at raising awareness regarding prevention and treatment of the disease. – by Regina Schaffer

Disclosure: This study was funded by the Wellcome Trust. Ezzati reports receiving a charitable grant from the Youth Health Program of AstraZeneca unrelated to this research. Krug reports no relevant financial disclosures. 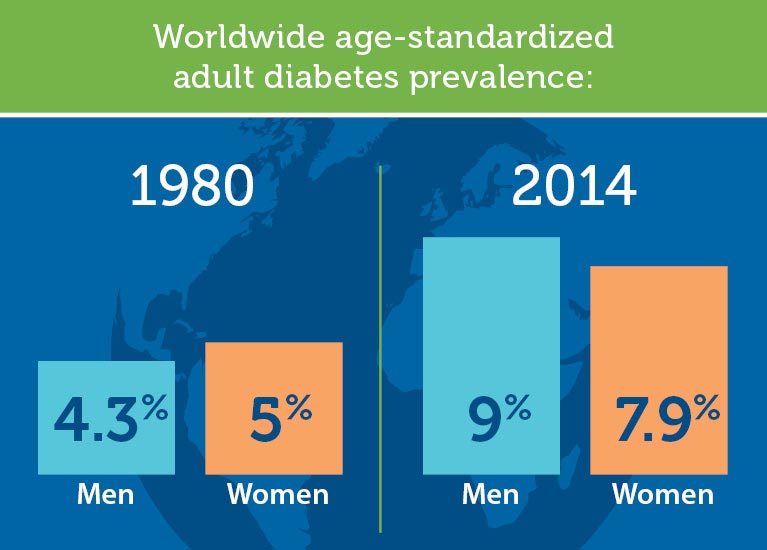