‘The worst headache of my life’

A 30-year-old man was referred for evaluation of a pituitary mass. The patient reported he was previously well until he developed a severe, unrelenting headache. The headache was described as a generalized constant pain/pressure that was worse upon lying down or with Valsalva maneuver. The headache was so severe that he was unable to sleep for several nights. He reported no other associated symptoms, including neck stiffness, nausea, vomiting, abdominal pain, orthostatic dizziness or vision changes.

After 8 days of constant headache, the patient saw his primary care provider. A noncontrast CT of the brain revealed a hyperdensity in the pituitary gland. An MRI scan with gadolinium using a pituitary protocol was ordered to further evaluate this area (Figures 1 and 2). The MRI demonstrated a 2.1 cm x 1.2 cm x 1.6 cm peripherally enhancing sellar mass with suprasellar extension, superior displacement of the infundibulum, and possible mass effect on the optic chiasm most consistent with pituitary adenoma. Within the lesion, there was a T1 hyperintensity that did not enhance with contrast, compatible with hemorrhage. These findings were concerning for intratumoral hemorrhage within a pre-existing pituitary adenoma.

The patient’s headache had resolved at the time of the MRI. Based on the abnormal pituitary, he was referred for an outpatient endocrine evaluation without further treatment. 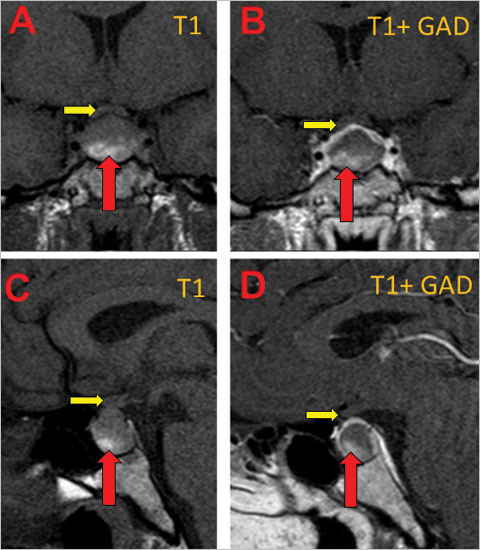 Figure 1. Initial T1-weighted MRI scan of the pituitary: (A) coronal pre-gadolinium, (B) coronal post-gadolinium, (C) sagittal pre-gadolinium and (D) sagittal post-gadolinium. A hyperintense area is seen within the pituitary adenoma suggesting an area of hemorrhage (red arrow). The hyperintense appearance of hemorrhage on MRI imaging is not changed after gadolinium infusion (A vs. B and C vs. D). The optic chiasm is indicated with a yellow arrow and shows superior deformity due to the enlarged pituitary gland. 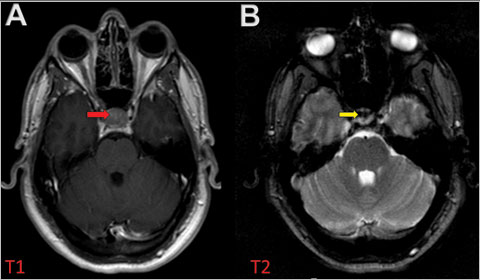 Despite the pituitary apoplexy on MRI, the patient had normal endocrine testing and no visual field defects. Dexamethasone and transsphenoidal resection were considered, but because the patient was asymptomatic he was monitored closely. He was given strict instructions about symptoms that should prompt him to return to the ED. A repeat pituitary protocol MRI with gadolinium after 6 weeks showed the pituitary gland had decreased in size but remained mildly enlarged, measuring 1.6 cm x 0.8 cm x 1.2 cm with residual hyperintensity on T1-weighted images. The optic chiasm showed no residual mass effect (Figure 3).

Pituitary apoplexy is an acute, potentially life-threatening clinical syndrome caused by sudden hemorrhage into the pituitary gland. The degree of hemorrhage and edema determine the size of the mass and extent of neurologic symptoms. One case study of pituitary apoplexy reported headache was the most common presenting symptom (97%), followed by nausea (80%) and reduction in visual fields (71%).

Figure 3. 6-week follow-up T1-weighted MRI scan of the pituitary: (A) coronal pre-gadolinium, (B) sagittal pre-gadolinium. The size of the pituitary adenoma (red arrow) has decreased significantly since the initial MRI (Figures 1A and 1C). The optic chiasm does not show the deformity compared with Figure 1 (yellow arrow). Pituitary stalk is represented by the green arrow.

Characteristic findings on CT and MRI can confirm a clinically suspected diagnosis (Table 1). MRI is superior to CT in detecting apoplexy. One clinical study showed CT was diagnostic in only 28% of patients while MRI was diagnostic in 91% of cases. On CT imaging, an apoplexy can appear as an area of hyperdensity corresponding to hemorrhage. Post-contrast, the hemorrhagic area will remain unchanged while the periphery may exhibit ring-like enhancement.

Best management of pituitary apoplexy continues to be debated. Initial management with replacement of deficient hormones is generally agreed upon, but the need and timing for surgery and/or high-dose glucocorticoid therapy remains controversial, especially in patients with neuro-ophthalmic symptoms. Patients without neuro-ophthalmic symptoms, as was seen in our patient, can typically be treated conservatively without surgery or steroids. Our patient remains asymptomatic with normal pituitary function. He will be followed with a repeat MRI in 6 months. There are no plans for transsphenoidal surgery at this time.