A Puerto Rican woman aged 50 years presented to an ophthalmologist with complaints of vision changes, including difficulty seeing images in her peripheral vision in both eyes and difficulty in color perception. Her medical history was significant for menopause at age 43 years, type 2 diabetes and hypertension. She had no prior history of thyroid disease, changes in her weight, dizziness or lightheadedness, headaches, galactorrhea or growth of her hands or feet.

Formal visual fields showed bitemporal superior quadrantopsia, and she was sent to the ED for further evaluation.

A pituitary protocol MRI was performed that showed a large 3 cm x 2 cm x 2.2 cm mass in the pituitary with mild osseous remodeling of the sella turcica and mass effect on the optic chiasm (Figure 1). The mass was isointense with the brain parenchyma on T1-weighted and T2-weighted images and homogeneously enhanced after IV gadolinium contrast administration. 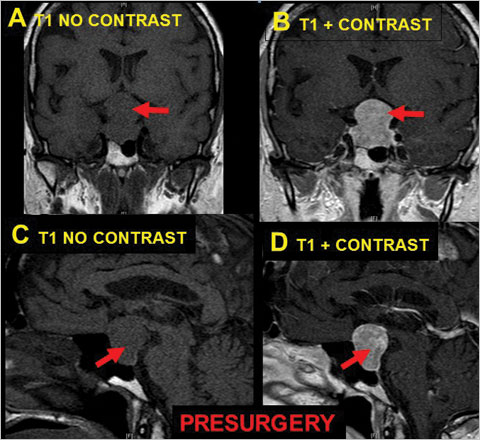 Figure 1. T1-weighted MRI images with and without contrast of the pituitary. Coronal (A) and sagittal (C) images showed a large isodense (with brain parenchyma) 3 cm x 2 cm x 2.2 cm mass (red arrow) in the sella with superior extension to the optic chiasm. After gadolinium contrast, coronal (B) and sagittal (D) images show the mass homogenously enhances consistent with a pituitary adenoma.

The patient was diagnosed with a nonsecreting pituitary adenoma with suprasellar extension and optic chiasm compression with visual field deficits. The macroadenoma caused an inappropriately normal LH and FSH in a postmenopausal woman consistent with hypogonadotrophic hypogonadism.

She underwent transnasal transsphenoidal resection of the nonsecreting pituitary adenoma. The dural defect caused by the surgery was patched with an abdominal fat graft with a DuraSeal dura patch. A postoperative MRI showed complete resection of the adenoma with no evaluable tumor in the sella (Figure 2). Her postoperative course was complicated by transient diabetes insipidus requiring intermittent desmopressin; however, this resolved before her discharge from the hospital.

Figure 2. T1-weighted MRI images with contrast. Coronal views before (A) and after (B) transphenoidal tumor resection show complete resolution of the enhancing pituitary mass (A; red arrow) that is replaced with a new hypodense mass in the sella (B; yellow arrow). This mass is filled with cerebrospinal fluid with a residual rim of enhancing tissue. This is consistent with the development of a pseudomeningocele in the sella.

Postoperative testing confirmed secondary deficiency of the adrenal, thyroid and ovarian axes requiring hormone therapy. The patient had stable temporal hemianopia in the left eye with improved vision in the right eye.

One year after surgery, during a routine follow-up appointment, the patient reported no dizziness, lightheadedness, worsening vision changes, rhinorrhea or headache. She had a follow-up MRI of the brain with and without contrast, which showed the interval appearance of a mass in the sella that extended from the sphenoid sinus into the sella and came in contact with the optic nerve (Figure 3). 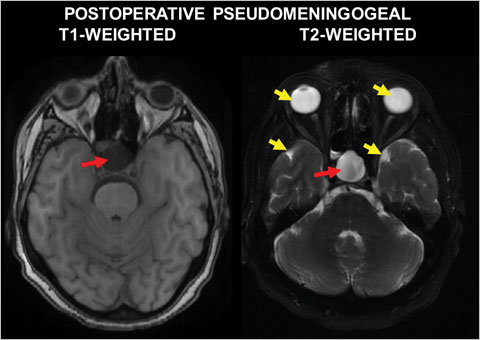 On MRI, the mass was isodense with the cerebral spinal fluid (CSF) with a residual rim of enhancing normal pituitary tissue. This appearance is consistent with the postoperative development of a pseudomeningocele and not a solid mass in the sella (Table).

Treatment may be conservative or may involve neurosurgical repair if symptomatic. Little published data addresses the development of pseudomeningoceles after transsphenoidal pituitary surgery, but this complication occasionally occurs, especially if the dural incision is large. One study noted that pseudomeningoceles are one of the most common complications after suboccipital decompression for Chiari’s malformation, but the effect of this complication is unclear.