Hypersexuality, hirsutism and acne in a postmenopausal woman

A 70-year-old woman presents with a year-long complaint of, “I am always thinking about sex.” She noted several years of increased facial hair, frontal balding, new acne, feelings of aggression and size of her “private parts.” She was in the church choir and noted in the last year that she had gone from singing soprano to tenor.

Her medical history was significant for hypertension, osteoporosis and parathyroidectomy for double adenoma. In her early 50s, she had a hysterectomy and left oophorectomy for fibroids and an ovarian cyst. She went into menopause within 5 years of this surgery.

Her physical exam showed a virilized elderly female with a deep voice, frontoparietal balding, hirsutism of her mustache, chin and chest. She had calf muscle hypertrophy and marked clitoromegaly (2 cc volume).

Laboratory studies showed a normal potassium (4.1 mmol/L) and hemoglobin/hematocrit (13.4/40.3%). Her luteinizing hormone (LH) was 38.2 mIU/mL and her follicle-stimulating hormone (FSH) was 72 mIU/mL, consistent with menopause. Her total and free testosterone levels were elevated to 395 ng/dL (normal: 2-45 ng/dL) and 14.8 pg/mL (normal: 0.2-5 pg/mL). Her adrenal androgen levels — dehydroepiandrosterone sulfate (DHEAS; 41.4 mcg/dL) and 17-hydroxyprogesterone (36 ng/dL) — were normal. A 24-hour urinary free cortisol was normal (22.1 mcg) with a creatinine of 1.1 g, indicating an adequate collection of urine.

The causes of virilization with an elevated testosterone in a postmenopausal female are adrenal and ovarian tumors and ovarian hyperthecosis. Adrenal imaging by CT scan (not shown) and a normal DHEAS excluded a virilizing adrenal tumor. A normal 17-hydroxyprogesterone excluded the most common form of congenital adrenal hyperplasia. A normal urinary free cortisol excluded Cushing’s disease.

The remaining right ovary was the most likely source of the androgen excess. CT of the abdomen and pelvis did not show an adrenal or ovarian mass. Pelvic ultrasound imaging did not show an ovarian tumor or polycystic ovarian disease (Figure 1), but the volume of the solid, non-cystic right ovary was 8.3 cm3, which is significantly larger than the expected average volume of 2.2 ± 1.4 cm3 for a woman more than 15 years after menopause. The typical sonographic finding of hyperthecosis is a solid enlarged ovary without cysts and a hyperechogenic stroma. 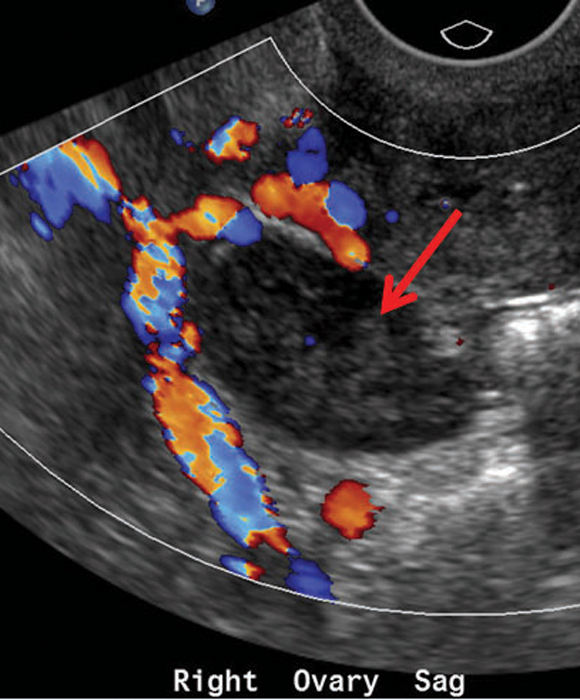 Figure 1. Ultrasound of the right ovary. This sagittal image shows a solid, non-cystic right ovary with prominent periovarian vascularity by Doppler analysis. There was no evidence of an ovarian tumor. The radiologist did not recognize that the ovary was larger than expected for a woman who had been in menopause for more than 15 years.

Imaging techniques do not always reveal the cause of hyperandrogenism and may even be misleading due to incidental adrenal nodules. Although more technically difficult, combined adrenal and ovarian venous sampling with or without stimulation with human chorionic gonadotropin (hCG) may be required to confirm the source of androgen excess. Diagnosis of hyperthecosis can be made by: 1) ovarian and adrenal venous sampling for testosterone; 2) suppression of LH/FSH and testosterone levels by a gonadotropin-releasing hormone (GnRH) agonist therapy with leuprorelin; or 3) histological examination of the ovaries showing nests of luteinized cells in the ovarian stroma.

The decline in ovarian androgen production in postmenopausal women is much less than the decline in estrogen production. The ovaries become primarily androgen-producing glands in postmenopausal women. The relatively high rate of androgen production is due to the increase in gonadotropin secretion, which differentiates ovarian interstitial cells into islands of luteinized stromal theca cells that make testosterone. These islands of luteinized theca cells are scattered throughout the ovarian stroma rather than being localized around cystic follicles in polycystic ovarian syndrome. It is not known why there are sufficient numbers of steroidogenically active luteinized stromal theca cells in some postmenopausal woman to result in hyperthecosis and hirsutism/virilization. Ovarian hyperthecosis has also been associated with resumed ovarian secretion of estrogen that is associated with postmenopausal bleeding with endometrial hyperplasia and associated increased risk for endometrial carcinoma.

Seingold in 1986 was the first to report the successful use of a long-acting GnRH agonist to suppress pituitary secretion of LH/FSH to decrease testosterone production in hyperthecosis. GnRH therapy has proved to be effective in postmenopausal women, but based on the expensive, long-term, parenteral treatment, oophorectomy is the preferred treatment in postmenopausal women since fertility is not a clinical issue. Oral birth control pills (oBCP) can be used to suppress LH/FSH levels, but in a very small series of five premenopausal females with hyperthecosis, there was a minimal, not clinically significant response. Further, the increased risk for cardiovascular disease from exogenous estrogens in elderly women makes oBCP not an option for this postmenopausal female.

Her diagnosis of hyperthecosis was confirmed by a therapeutic trial with GnRH agonist, leuprorelin, 7.5 mg intramuscularly each month. Within 1 month, she had a dramatic decrease in her total and free testosterone levels that persisted for the 6 months of therapy (Figure 2). The decrease in testosterone also resulted in a reduction in erythropoiesis and hematocrit. The patient had a marked reduction in acne and hirsutism with regrowth of her scalp hair. After 6 months, she refused further treatment with leuprorelin because of uncontrolled hot flushes, resulting in elevation of her LH, FSH and testosterone levels. Because of the recurrence of her symptoms, the patient underwent surgical excision of her ovary. After the surgery, her testosterone levels decreased to normal postmenopausal levels.