A 41-year-old female was seen in the foot clinic by a podiatrist for left foot pain. While walking on Sept. 14, 2010, she developed severe pain in her left foot after hearing a “snap.” She had regular menstrual periods, did not smoke or drink alcohol and had no prior history of bone fractures.

Her family history was unremarkable. Left foot radiograph showed a small horizontal nondisplaced lucency extending through the cortex at the proximal third of the second left metatarsal bone with a notation that the joint spaces and bone mineralization were preserved.

The spontaneous stress fracture on the initial radiograph is too subtle to be reproduced for this article.

The patient was placed in a walking boot with instructions for limited weight bearing. She returned Oct. 29, 2010, with a marked reduction in her foot pain. Her foot radiograph showed interval endosteal and periosteal callus formation around the nondisplaced fracture consistent with healing (Figure 1).

She returned in November 2010 and March 2011 complaining of progressive severe pain with swelling of her left foot. Repeat radiograph on April 22, 2011, (Figures 1 and 2) showed the stress fracture progressed to a complete fracture through the second metatarsal shaft with surrounding callus. A foot CT scan on April 29, 2011, showed a complete fracture lucency with incomplete osseous bridging consistent with malunion of the second metatarsal fracture (Figure 2). She was referred to an orthopedic surgeon who placed her in a non-weight bearing short leg cast, but repeat radiograph on July 12, 2011, showed worsening of the fracture. 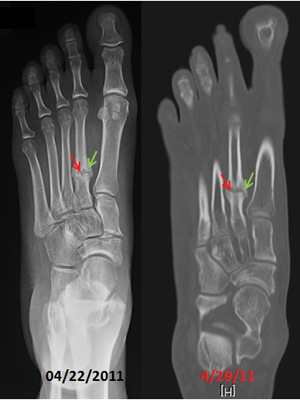 She was referred to the endocrine clinic on July 18, 2011, for a metabolic bone evaluation.

She was a darkly pigmented African American woman with lifelong lactose intolerance and an unmeasurable calcium intake. She did not take a multiple vitamin and avoided the sun because of a fear of wrinkles. Her renal function was normal with a creatinine of 0.66 mg/dL. Her thyroid function was normal with a thyroid-stimulating hormone of 0.84 uIU/mL. Her calcium was 8.9 mg/dL, albumin was 3.8 g/dL and alkaline phosphatase was 60 U/L; all were normal. Her 25-hydroxyvitamin D was very low at 6 ng/mL with an elevated 1,25-dihydroxyvitamin D level of 105 pg/mL (normal: 18-72) and a borderline high parathyroid level of 56 pg/mL (normal: 11-60).

She was felt to be extremely vitamin D deficient with a lifelong inadequate calcium intake. On July 20, 2010, she was started on vitamin D 50,000 U each week for 8 weeks, besides daily doses of vitamin D 2,000 U, a women’s multiple vitamin (vitamin D 800 U plus calcium 500 mg) in the morning and calcium citrate 630 mg with dinner.

About 1 month later, her foot radiograph on Aug. 16, 2011, showed healing of the fracture with the residual fracture lucency showing new periostitis and osseous bridging. A radiograph from Sept. 27, 2011, showed vigorous boney callus formation and complete osseous bridging of the fracture. Clinically, her foot was much less painful and swollen and she slowly progressed to a walking boot with partial weight bearing. Her vitamin D level 4 weeks after the completion of the vitamin D load was 35.1 ng/mL. She was instructed to continue her woman’s vitamin, calcium and vitamin D supplements. Within 2 months, she had complete healing of the metatarsal fracture, and after 2 years, while continuing these supplements, she has had no new fracture.

Vitamin D deficiency, which causes rickets in children and osteomalacia in adults, is characterized by impaired bone mineralization. Vitamin D is a fat-soluble vitamin that is natural in very few foods. It is produced endogenously when ultraviolet light triggers the production of vitamin D from cholesterol in the skin. Patients with dark pigmentation have a reduced ability to form vitamin D.

Vitamin D must go through a two-step activation process. First, it travels to the liver and is converted to 25-hydroxyvitamin D. This is a storage form of vitamin D and is measured to determine vitamin D sufficiency. The final step of activation occurs in the kidney to form 1,25-dihydroxyvitamin D, also known as calcitriol. As demonstrated by this patient, 1,25-dihydroxyvitamin D should not be measured to detect vitamin D deficiency. The levels can be normal or high because of accelerated conversion of the pro-vitamin to the bioactive form during vitamin D deficiency.

Vitamin D promotes calcium absorption for the gut. The combination of vitamin D deficiency plus low calcium intake results in abnormal calcification or mineralization of the bone. Typically, severe vitamin D deficiency is associated with thin, brittle and abnormal bones in children, causing the typical bowing of the legs of rickets. In adults, vitamin D deficiency is associated with osteomalacia and reduced bone density with some reports of increased risk for fracture and poor healing after fractures. This patient started with a nontraumatic stress fracture. The normal healing process is complex and requires the expression of several thousand genes. After the initial fracture, the bone heals in a four-step process: 1) an inflammatory response, which results in the 2) recruitment of mesenchymal stem cells to generate a primary cartilaginous soft callus after 7 to 9 days. The callus then 3) undergoes revascularization and the callus chondrocytes creates an extracellular matrix that is calcified to create a hard callus. The final step of fracture healing is 4) resorption of the cartilage and remodeling the hard callus to normal bone structure by osteoblasts and osteoclasts.

This patient initially had a tiny stress fracture. After the inflammatory response, the fracture could be visualized on Oct. 29, 2010. Although cartilaginous callus formation was detected April 22, 2011, it did not completely calcify, and with repeat trauma resulted in a complete fracture of the shaft of the metatarsal bone. The complete non-union was not seen on the plain radiograph and required a CT scan for diagnosis (Figure 2). It was remarkable that complete immobilization and non-weight bearing did not result in healing of the fracture until vitamin D and calcium was initiated.