A 45-year-old man was seen for urgent evaluation of worsening headaches and loss of vision. He first noticed his symptoms 6 months before the onset of recurrent headaches with blurry and blank spots in his vision.

His headaches and loss of vision rapidly worsened during the past week; he was observed walking into a doorway at his clinic visit. On review of systems, we noted a recent weight gain from 240 lb to 275 lb and decreased libido. He reported that his girlfriend detected his decreased libido, but he felt he was having normal morning erections without erectile dysfunction.

The remainder of his review of systems was otherwise negative. Physical exam revealed an obese man (BMI, 42) without any increased hyperpigmentation, wide purple striae, acanthosis nigricans or dorsocervical fat pad. There was no enlargement of his jaws, hands or feet, or Tinel’s sign. His thyroid was palpable but not enlarged, with no discrete nodules. His eye exam showed normal extraocular movements, and pupils were equal, round and reactive to light. Immediate ophthalmology evaluation showed his vision with pinhole correction was 20/400 on the right and 20/50 on the left. On confrontation, he had bitemporal hemianopsia that was confirmed by Humphrey visual field testing. Labs were obtained in the early afternoon and showed evidence of mild central hypothyroidism and hypogonadotropic hypogonadism (Table 1). His prolactin level was normal at 7.8 ng/mL and confirmed after repeat assay of diluted sperm.

MRI brain with and without contrast. Pre-contrast coronal (A) and pre-contrast sagittal (B) views show a large heterogeneous 2.7 cm x 2.8 cm x 3.6 cm mass (red arrow) within the suprasellar compartment with extension superiorly into the third ventricle and inferiorly into the sella with mass effect on the superior margin of the pituitary gland (blue arrow). The pituitary infundibulum was not well visualized. There was marked compression and superior displacement of the optic chiasm and the intracranial portions of the optic nerves (white arrow). Sphenoid sinus (SS). Post-gadolinium contrast coronal (C) and post-contrast sagittal (D) views showing the suprasellar mass (red arrow) was mildly lobulated, predominantly hypointense on T1-weight images with relatively intense enhancement after IV gadolinium of the solid components of the mass. Multifocal areas of hypo-enhancement seen within the lesion suggestive of cystic necrosis.

An MRI without contrast with magnified pituitary images showed a large 2.7 cm x 2.8 cm x 3.6 cm heterogeneous mass within in the suprasellar cistern and extending up to the third ventricle (Figures 1A, 1B). The suprasellar mass was mildly lobulated, predominantly hyperintense on T2-weighted images, hypointense on T1-weighted images and mildly hyperintense with FLAIR images. The mass demonstrated relatively intense enhancement after gadolinium contrast with multifocal areas of hypo-enhancement seen suggestive of focal areas of cystic necrosis (Figures 1C, 1D). There was marked compression and superior displacement of the optic chiasm (Figure 1, white arrows). Residual normal thyroid was seen in the inferior portion of the sella that demonstrated normal enhancement with gadolinium (Figure 1, blue arrows). There was no evidence of edema in the adjacent parenchyma. A head CT without contrast was obtained and showed hyperdense components within the lesion and without calcifications. 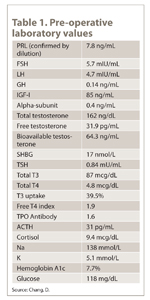 Imaging and biochemical testing was consistent with a large nonfunctioning suprasellar tumor with MRI characteristics concerning for a craniopharyngioma (suprasellar origin, heterogeneous solid-cystic components and enhancement with contrast). The patient was directly admitted to the neurosurgical service the same day and underwent a transsphenoidal debulking. His postoperative course was complicated by central diabetes insipidus. Pathology was consistent with an adamantinomatous craniopharyngioma (Figure 3). His vision postoperatively showed a persistent bitemporal hemianopsia, but with significant improvement in visual acuity to 20/40 in the right eye and 20/20 in the left eye.

Craniopharyngiomas are relatively benign, slow-growing neoplasms (WHO grade I tumors) derived from epithelium from Rathke’s cleft in the sellar/suprasellar region. They account for 2% to 5% of primary brain tumors and can occur anywhere along the infundibulum (from the floor of the third ventricle to the pituitary gland). Craniopharyngiomas tend to have a bimodal distribution with the first peak between the ages of 5 to 14 years and a second peak in adults aged 50 to 74 years. There appears to be a similar incidence in both females and males. Clinical presentation differs with each patient due to the variable location and size of the tumor. Common complaints include headache, increased intracranial pressure, vision changes, short stature and delayed puberty in children, decreased libido, amenorrhea, diabetes insipidus or behavioral changes from tumor expansion and mass effect.

There are two craniopharyngioma subtypes: adamantinomatous and papillary. Adamantinomatous is the most common subtype and may occur at all ages, but predominantly affects young children. Macroscopically, they appear as heterogeneous solid-cystic masses. The cysts may be multilobulated and contain liquid described as “machinery oil” or shimmering cholesterol-laden fluid. This fluid consists of desquamated squamous epithelial cells, membrane lipids and cytoskeleton keratin (“wet keratin”). Histologically, the epithelium is composed of palisading layers of basal cells with an intermediate layer of loose aggregates of stellate cells (or stellate reticulum).

The papillary subtype is almost seen exclusively in adults and is formed from metastatic squamous cells. Papillary craniopharyngiomas are usually predominantly solid in appearance with a minor cystic component on imaging. Craniopharyngiomas can be large, encasing and/or adherent to neighboring structures, and extending into the third ventricle. The solid components of a craniopharyngioma enhance with contrast vividly on MRI and have different characteristics compared with other sellar/suprasellar masses (Table 2).

Calcification is very common in the adamantinomatous subtype seen in children. Craniopharyngiomas are, histologically, relatively benign but tend to be locally aggressive due to mass effect and adherence to adjacent critical structures. Thus, craniopharyngiomas can have greater tumor-related morbidity than other central nervous system tumors, and their presenting symptoms (neurological, endocrine and somatic) may be permanent and/or exacerbated by surgical treatment. Treatment is usually debulking rather than curative surgery via transsphenoidal approach vs. craniotomy, depending on the size and location of the tumor. Consideration for radiotherapy is especially useful in cases of incomplete resection or regrowth of the tumor.