Premature thelarche and premature adrenarche are frequently benign and may not lead to precocious puberty.

ORLANDO, Fla. - Children today are reaching developmental milestones earlier than before but early onset of breast development or early activation of the adrenal gland alone does not necessarily constitute a diagnosis of precocious puberty.

Changes prior to these ages, the guidelines say, should cause concern for precocious puberty. However, developmental changes occur across a spectrum and some changes that appear to be happening too early may be benign, according to Gary Francis, MD, PhD, professor and associate chair for research at the Uniformed Services University of the Health Sciences, Bethesda, Md.

Likewise, some children have early activation of the adrenal gland (premature adrenarche) that may cause early development of axillary hair, said Francis.

Sex hormones are present and active at all stages of life, even in the first few years after birth. By about age 2 years until the onset of puberty, gonadotropic surges are actively suppressed by the brain.

At the onset of puberty, the hypothalamic-pituitary-gonadal axis reactivates, spurring production of gonadotropin-releasing hormone, which leads to the release of luteinizing hormones and follicle stimulating hormones.

However, in some children, incomplete inhibition of the hypothalamic-pituitary-gonadal axis leads to the release of hormones earlier than expected, possibly leading to premature thelarche.

“Why does this happen? Probably the hypothalamic-pituitary-axis is more responsive in some children in the first few months of life than it is others,” said Francis.

Premature thelarche may also be related to race. A study looking at more than 17,000 children and age of pubertal changes found that breast development in black girls might be present as early as age 6 and in white girls as early as age 7. In such cases, if there are no other signs of pubertal development and there is no accelerated growth velocity or bone age, premature thelarche is an appropriate diagnosis, said Francis. 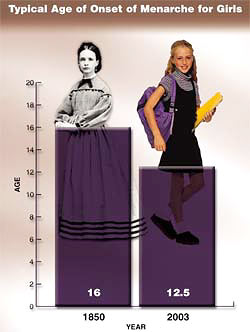 “Some children are very sensitive to the increase in androgen production and will develop pubic hair but nothing more than that,” said Francis.

Premature adrenarche is associated with modest acceleration in growth velocity or advanced bone age, axillary hair and mild acne, but has not been associated with increased muscle mass or clitoral or phallic enlargement.

A subset of girls with premature adrenarche have a condition known as non-classical congenital adrenal hyperplasia, which can lead to advanced bone age and clitoromegaly. The syndrome is a genetic disorder and predominates among Eskimo, black, Jewish and Hispanic children.

Instead, he said, the presence of more than one sign of puberty before the appropriate age is a cause for concern. What may look like precocious puberty may be McCune Albright syndrome, growth hormone deficiency, hyperthyroidism or hyperinsulinism.

Central nervous system malformation is common and imaging is required if gonadotropin-dependent precocious puberty is suspected. Testing for gonadotropin levels and performing an ultrasound is also recommended, said Francis.

If, however, gonadotropin is suppressed, “you should look for bony abnormalities, café-au-lait spots, family history and look at the adrenals for tumors” if gonadotropin-independent precocious puberty is suspected, according to Francis. – by Bryan Bechtel