CAD has proved to be a highly preventable disease. Reduction in risk for CAD has been accomplished by changes in lifestyle such as cessation of smoking or lowering plasma cholesterol by drug therapy. Multiple randomized placebo-controlled clinical trials since the early 1990s targeting lowering of plasma cholesterol have consistently been associated with a 30% to 40% reduction in cardiac morbidity and mortality. Despite these efforts, CVD remains the most common cause of death in the U.S. and is also the most common cause of death throughout the world. Secondary prevention has been effective, whereas primary prevention offers even greater benefits and is more appropriate, if not necessary, to reduce this pandemic.

The issue with early primary prevention is selecting those who are asymptomatic and would benefit most from preventive measures. The Current Clinical Practice Guidelines (CCPG) use well-known conventional risk factors to select those who would benefit most from preventive therapy. However, conventional risk factors (hypertension, diabetes, smoking, obesity, sedentary way of life, diet and cholesterol) except for plasma cholesterol are not often present until the sixth or seventh decade, which is somewhat late for primary prevention (Figure 1).

Coronary atherosclerosis is initiated early in life, with gradual slow progression to clinical events in the sixth (men) and seventh (women) decade of life. To prevent CAD in men, one would need to initiate preventive measures in the third decade, or at least not later than the fourth decade. In women, primary prevention may be effective even if initiated early in the fifth decade. The hormones of premenopause are protective and delay CAD by about 10 years compared with its occurrence in men.

Risk factors to select those at risk for CAD who would benefit from primary prevention in the early asymptomatic phase are lacking. Although conventional risk factors such as hypertension are not present until later in one’s life, increased plasma cholesterol occurs earlier in almost everyone. The mean plasma LDL in U.S. men at age 40 years is 146 mg/dL and in women at age 40 years is 121 mg/dL, which is approximately twice the level recommended by the CCPG (70 mg/dL). 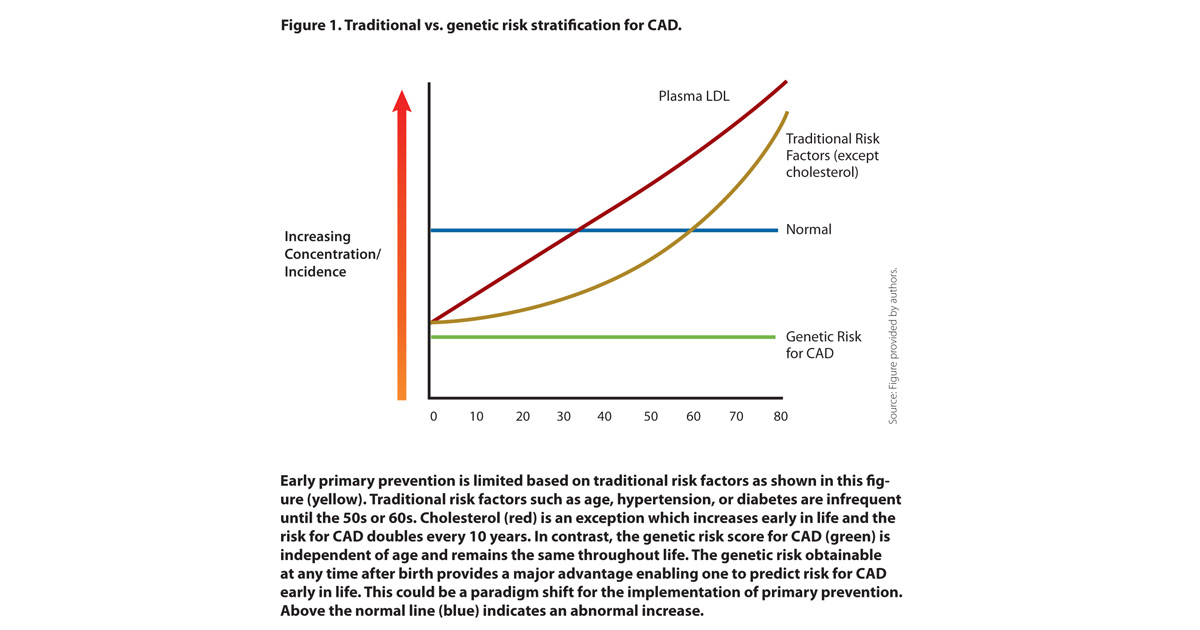 It has been suggested to treat everyone with a plasma LDL of at least 70 mg/dL; however, it is estimated that only 50% of the population that live a normal life span will experience a cardiac event. This means that 50% of people with elevated plasma LDL do not experience cardiac events. It would be more appropriate to administer more aggressive primary prevention to those individuals in the 50% at risk for CAD. This would avoid unnecessary side effects and cost, in keeping with the current trend of precision medicine.

As originally hypothesized, the genetic risk for CAD, as for most common chronic disorders, is transmitted via multiple DNA variants, with each variant imparting only minimal risk. However, genotyping one’s DNA for these risk variants can provide a single number to summarize the total genetic burden of risk in that individual. For each genetic risk variant, one may have zero copies (neither parent has the variant), one copy (heterozygous, with only one parent transmitting it) or two copies (homozygous, with each parent transmitting it). The risk for CAD associated with each variant has been determined in previous genome-wide association studies. The number of copies of each variant inherited by each individual multiplied by the predetermined risk for each variant is summed to provide a single number that represents the total genetic risk burden for that individual.

Risk stratification for CAD based on the polygenic risk score (PRS) has the advantage of not being age-dependent in contrast to the age-dependent conventional risk factors. One’s genetic risk is determined at conception and remains the same throughout life. The conventional risk factors except for cholesterol evolve slowly with age and are often within the normal range until the fifth or sixth decade, which is less than desirable for early prevention. The genetic risk score would have the potential to determine one’s genetic risk for CAD early in life.

Utilizing microarrays encrypted with the genetic risk variants for CAD has led to the evaluation of the PRS in more than 1 million individuals. Risk stratification for CAD utilizing the PRS is superior to risk stratification based on conventional risk factors. Michael Inouye, PhD, from the Cambridge Baker Systems Genomics Initiative in Melbourne, Australia, and Cambridge, United Kingdom, and colleagues evaluated the PRS in 22,242 patients with CAD and 460,387 controls in the UK Biobank.

The highest genetic risk score, which represented 20% of the sample, had a fourfold increased risk for CAD. Amit V. Khera, MD, cardiologist at Corrigan Minehan Heart Center and associate director of the Precision Medicine Unit in the Center for Genomics Medicine at Massachusetts General Hospital, and colleagues used a sample size of 288,278 from the UK Biobank. They determined the PRS for this population and observed that the top 2.3% of the population had a fourfold increased risk for CAD, whereas the top 0.5% had a fivefold increased risk for CAD. The investigators noted that most of these individuals with high genetic risk for CAD, as determined by the PRS, would not have been detected by conventional risk factors such as hypertension or obesity. Thus, the PRS is not only independent of age but also relatively independent of conventional risk factors.

The role of cholesterol-lowering agents

There has been for some time the myth that if it is in your genes, one cannot do anything about it. This has never been true, as genetic risk is reduced by the same treatment as CAD induced by acquired or environmental factors. Retrospective genotyping was performed on individuals participating in several clinical trials designed to determine the effect of drug lowering of cholesterol on cardiac morbidity and mortality. 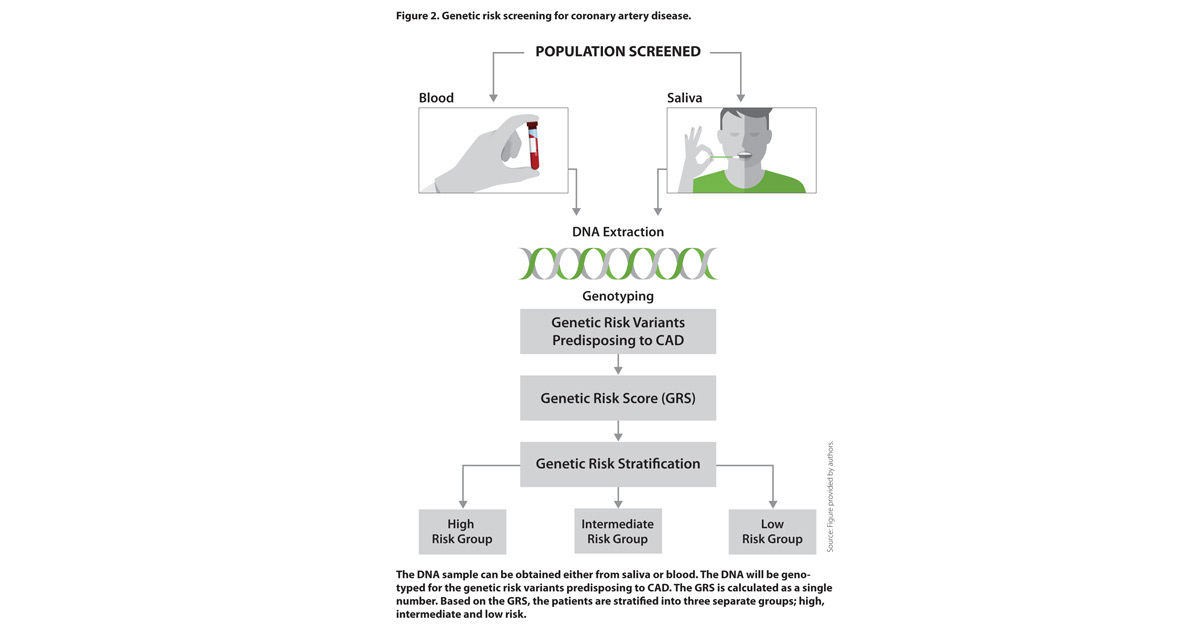 One study by Jessica L. Mega, MD, MPH, chief medical and scientific officer of Verily, and colleagues included four large clinical trials (JUPITER, ASCOT, CARE and PROVE-IT TIMI). Another was an analysis of the WOSCOPS trial of statin therapy in men. Both studies indicated the individuals with the highest genetic risk score had the highest incidence of cardiac events and received the most benefit from statin therapy. The increased power of risk stratification of the PRS over that of conventional risk factors was illustrated by the observation of the number of individuals required to treat with statin therapy in WOSCOPS to prevent a cardiac event was only 13.

The cohorts of at least four large clinical trials (FOURIER, IMPROVE-IT, ODYSSEY Outcomes and SPARCL) assessing the effect of ezetimibe or PCSK9 inhibitors have undergone genotyping and subsequent genetic risk stratification using the PRS. The findings are similar to that of statin therapy, showing individuals with the highest PRS had the most cardiac events in the placebo group and those with the highest PRS in the treated group received the greatest benefit from lipid-lowering therapy.

The role of favorable lifestyle changes

In a prospective genetic risk stratification analysis of three cohorts, with a total sample size of 55,685, Khera and colleagues observed the risk for CAD was 91% greater in the group with the highest PRS compared with those with the lowest PRS. Those who followed a favorable lifestyle (no current smoking, no obesity, regular physical activity and a healthy diet) in the highest genetic risk group had 46% fewer cardiac events compared with those with an unfavorable lifestyle.

The clinical guidelines as outlined by American College of Cardiology, the American Heart Association and the European Society for Cardiology would not recommend preventive measures for individuals aged 30 to 49 years whose only risk factor is increased plasma LDL. Data strongly indicate the risk for CAD from plasma LDL is not only proportional to the concentration, but also the exposure, which doubles the risk for CAD for each additional decade of exposure. This is in keeping with the pathophysiology and data obtained from clinical trials and Mendelian randomization studies, which strongly indicate early prevention is two to three times more effective. For example, decreasing plasma LDL as secondary prevention in a clinical trial for 3 to 5 years is associated with a 20% reduction in cardiac events per LDL reduction of 39 mg/dL. In contrast, Mendelian randomizations show nearly a 60% reduction in cardiac risk per reduction in plasma LDL of 39 mg/dL over a mean lifetime of 50 years.

Utilizing genetic risk stratification for CAD would enable the initiation of early preventive measures in both men and women. The current ACC/AHA guidelines suggest the use of other risk factors referred to as enhancers to be used in determining risk to inform primary prevention strategies. Utilizing genetic risk stratification as an enhancer would be a paradigm shift in the primary prevention of this pandemic disease. The cost of the test is quoted to be $100 to $200 and the genotyping technology is widely available. The genotyping may be performed on either blood or saliva, as illustrated in Figure 2.

The PRS is likely to improve as more risk variants for CAD are discovered, particularly CAD risk variants specific to certain ethnic and racial groups. The use of the PRS as an enhancer for risk stratification in addition to conventional risk factors has the potential to transform the primary prevention of CAD.