Patients with cancer have a five- to sevenfold increased risk for venous thromboembolism compared with patients without cancer, and chemotherapy increases the risk by 6.5-fold.

This risk depends on the tumor type and stage of cancer, use of cancer-associated treatment agents, biomarkers and patient-specific factors, such as advanced age, immobility, history of VTE and other comorbidities (Figure). Thrombotic events are the second leading cause of death in patients with cancer. Additionally, patients with cancer-associated VTE have a higher incidence of bleeding complications during anticoagulation therapy, and of recurrent VTE, compared with patients with VTE but without cancer. Due to the extent of primary literature surrounding both VTE prophylaxis and treatment, this article will focus only on VTE treatment.

Historically, the standard of care for VTE treatment consisted of a brief period of unfractionated heparin (UFH) or low-molecular-weight heparin (LMWH) followed by long-term anticoagulation with warfarin. However, this changed in 2003 with the findings of the CLOT trial, a multicenter, randomized, open-label study aimed to investigate the effectiveness and safety of dalteparin (Fragmin, Pfizer), an LMWH, compared with warfarin in preventing recurrent VTE in 676 patients with cancer who had an acute VTE. The study found the dalteparin group had a significant reduction in recurrent VTE at 6 months compared with the warfarin group. There were no significant differences between the groups in terms of major or any bleeding and mortality. These results led to LMWH becoming the standard of care for treatment of cancer-associated VTE for many years. However, it is undesirable to give long-term injections with an LMWH for a variety of reasons.

Since the birth of the direct oral anticoagulants (DOACs), there have been four randomized controlled trials comparing the DOACs to dalteparin. These include the Hokusai VTE Cancer trial of edoxaban (Savaysa, Daiichi Sankyo), the SELECTD trial of rivaroxaban (Xarelto, Janssen/Bayer) and the ADAM VTE and Caravaggio trials of apixaban (Eliquis, Bristol Myers Squibb/Pfizer). In each study, patients were followed for at least 6 months. Table 1 summarizes the results of each trial. 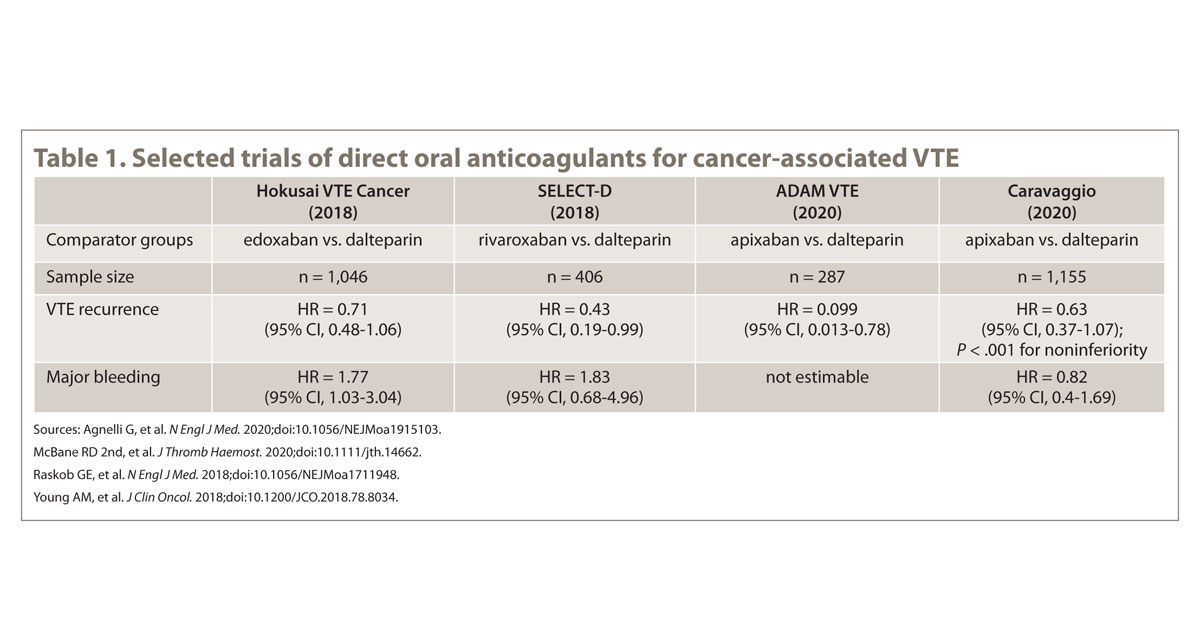 The Hokusai VTE Cancer trial was a multicenter, open-label, noninferiority study that randomly assigned patients with active cancer and acute VTE to edoxaban (LMWH for 5 days followed by edoxaban 60 mg daily) or dalteparin (200 IU/kg daily for 1 month followed by 150 IU/kg daily) for 6 to 12 months. The study found that edoxaban was noninferior to dalteparin with respect to the primary composite outcome of recurrent VTE or major bleeding at 12 months; however, there was a statistically significant increase in major bleeding associated with edoxaban. In the subgroup analyses, patients with gastrointestinal cancer were more likely to have increased bleeding with edoxaban compared with dalteparin.

The SELECT-D trial was a multicenter, open-label, superiority pilot study that randomly assigned patients with active cancer and acute VTE to rivaroxaban (15 mg twice daily for 21 days followed by 20 mg daily) or dalteparin (200 IU/kg daily for 1 month followed by 150 IU/kg daily) for 6 months. The study showed that rivaroxaban resulted in a significant decrease in the primary outcome of recurrent VTE at 6 months compared with dalteparin. In terms of safety, there was a numerically higher incidence of major bleeding with rivaroxaban compared with dalteparin, which was noted to be among patients with esophageal or gastroesophageal cancers.

The ADAM VTE trial was a multicenter, open-label, superiority study that randomly assigned patients with cancer-associated VTE to apixaban (10 mg twice daily for 7 days followed by 5 mg twice daily) or dalteparin (200 IU/kg for 1 month followed by 150 IU/kg daily) for 6 months. Unlike the Hokusai VTE Cancer and SELECT-D trials, the primary outcome of this study was major bleeding. Major bleeding occurred in 0% of patients assigned apixaban and 1.4% of patients assigned dalteparin (P = .138). There was also a significant reduction in the secondary efficacy endpoint of recurrent VTE with apixaban compared with dalteparin. 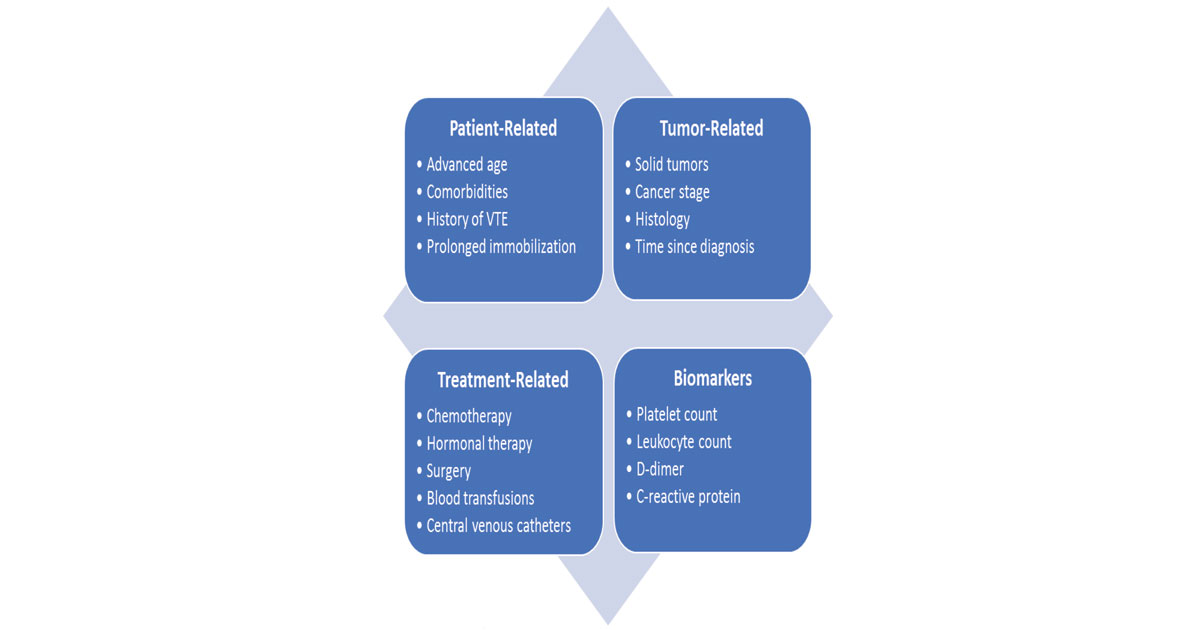 The Caravaggio trial was a multicenter, open-label, noninferiority study that randomly assigned patients with cancer-associated VTE to apixaban (10 mg twice daily for 7 days followed by 5 mg twice daily) or dalteparin (200 IU/kg daily for 1 month followed by 150 IU/kg daily) for 6 months. Apixaban was found to be noninferior to dalteparin for the primary outcome of recurrent VTE. There was no significant difference in major bleeding between the groups.

The results of these trials helped to shape the current practice guideline recommendations for treatment of cancer-associated VTE. Guidelines exist from numerous national and international organizations, but this article will describe two of them.

The 2020 American Society of Clinical Oncology (ASCO) guidelines recommend initial anticoagulation with UFH, LMWH, fondaparinux or rivaroxaban. If choosing a parenteral anticoagulant, the guidelines suggest that LMWH is preferred over UFH for the initial 5 to 10 days of therapy if the patient does not have a creatinine clearance less than 30 mL per minute. For long-term anticoagulation, LMWH, edoxaban or rivaroxaban for at least 6 months are preferred because of their better efficacy compared with warfarin. It is important to note that the 2020 guidelines were published before the results of the Caravaggio trial and thus did not include a recommendation regarding apixaban. Although inferior in efficacy, warfarin may be used if LMWH or DOACs are not accessible. Unlike many guidelines, ASCO recommends these anticoagulant options equally, citing high-quality evidence and a strong strength of recommendation.

The ASCO guidelines note that DOACs are associated with increased major bleeding in gastrointestinal and genitourinary malignancies and that caution is warranted in other settings of high risk for mucosal bleeding. Anticoagulation after the initial 6 months should be considered for select patients with active cancer, such as those with metastatic disease or receiving chemotherapy, if the benefit outweighs the risk. An inferior vena cava (IVC) filter may be inserted for patients with absolute contraindications to anticoagulation in the acute treatment setting, defined as a VTE diagnosis within the past 4 weeks, and the presence of a life-threatening thrombus. Based on expert opinion, an IVC filter may also be used as an adjunct to anticoagulation in patients with recurrent VTE or extension of an existing thrombus despite optimal anticoagulant therapy.

The 2020 National Comprehensive Cancer Network (NCCN) guidelines recommend DOACs — apixaban (category 1), edoxaban (category 1) and rivaroxaban (category 2A) — for the treatment of VTE in patients with cancer who do not have gastric or gastroesophageal lesions. However, for patients with gastric or gastroesophageal lesions, LMWH — dalteparin (category 1) or enoxaparin (category 2A) — is preferred. UFH (category 2B) is an alternative to LMWH for initial therapy and is preferred for patients with a creatinine clearance less than 30 mL per minute. Of note, NCCN defines category 1 as based upon high-level evidence (multiple adequately powered randomized controlled trials with consistent results) and uniform consensus ( 85% agreement) of the guideline committee. In contrast, categories 2A and 2B are based upon lower-level evidence and uniform ( 85% agreement) or less than uniform (> 50% but < 85% agreement) consensus that the intervention is appropriate. If the factor Xa inhibitors or LMWH are unavailable or inappropriate, dabigatran (Pradaxa, Boehringer Ingelheim) can be considered. An IVC filter may be used if anticoagulation is contraindicated for a VTE within 1 month of diagnosis. These guidelines recommend a duration of anticoagulation for at least 3 months or while the cancer is active or under treatment, or if risk factors for recurrence are present. The dosing of the DOACs for cancer-associated VTE treatment is provided in Table 2. 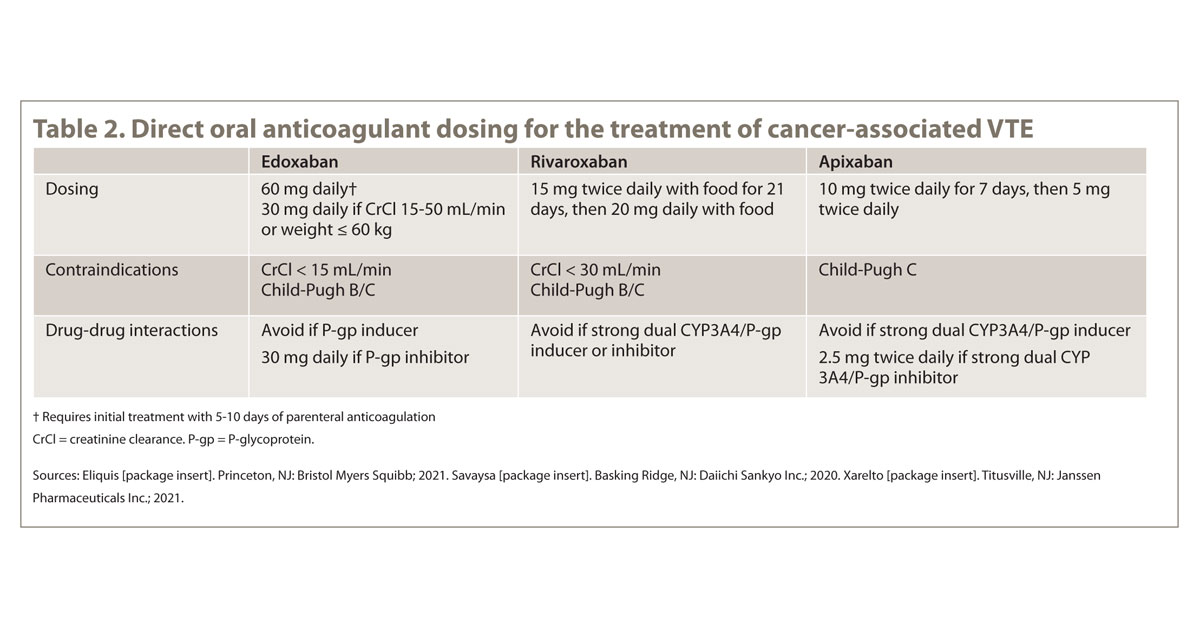 The treatment of cancer-associated VTE presents several challenges, including the risk for recurrent VTE and increased bleeding. The DOACs have been gaining popularity based on the results of recent trials and their ease of administration, and the guidelines recommend these agents as options for VTE treatment in patients with cancer. However, severe renal dysfunction, drug-drug interactions and elevated risk for major bleeding with certain types of cancer are several reasons why a provider may forgo initiation of a DOAC. Therefore, therapy needs to be selected using an individualized approach.