Two studies published in the Journal of the American Heart Association found that mortality from CAD has increased in women from rural areas since 2009, and having any social determinant of health increases the risk for mortality 90 days after HF hospitalization.

“An intensification of the public health efforts aimed at increasing cardiovascular health of rural women during young adulthood, adolescence and childhood is necessary,” Federico Moccetti, MD, who was a research fellow at Oregon Health and Sciences University in Portland at the time of the study and is now an interventional cardiologist at Heart Centre Lucerne in Switzerland, told Healio. “This is easier said than done. Cardiovascular risk factor detection and control is a complex and multifaceted issue and includes difficulties related to health care access, health literacy, social determinants of health, government policy, patient-related factors (eg, adherence) and last, but not least, physician-related factors (eg, physician inertia).”

Matthias Bossard, MD, interventional cardiologist and clinical researcher at Kantonsspital Luzerner in Lucerne, and colleagues analyzed data on CAD mortality rates from CDC WONDER databases from 1999 to 2017. Premature CAD mortality was defined as younger than 65 years in women and younger than 55 years in men. This information was used to determine the urban-rural differences in CAD mortality. 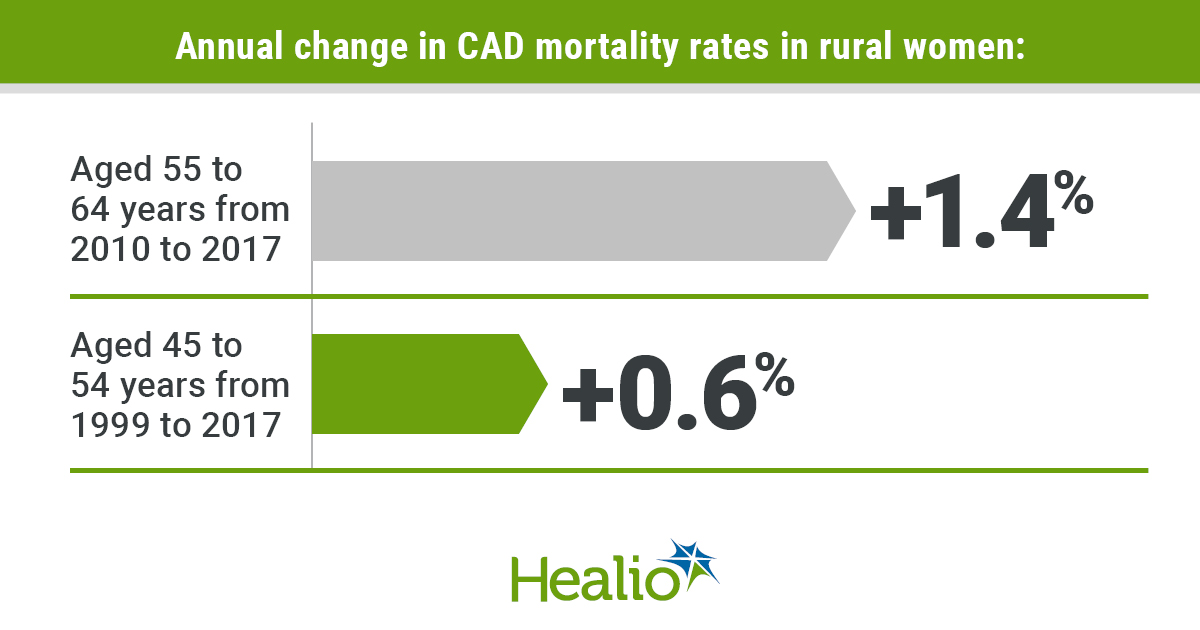 Annual change in rates for CAD mortality in women living in rural areas.

Mortality rate increases in rural areas were driven by an increase in mortality in white women starting in 2009 (EAPC, 0.9%; 95% CI, 0-1.8). A numerical increase in mortality rates was observed in black women, although it was not statistically significant (EAPC, 0.5%; 95% CI, 2 to 0.4). Compared with urban areas in the U.S., rural areas in the U.S. had consistently higher rates of premature CAD mortality despite race, sex and age.

“The nature of the data only allows us to describe this worrying trend, but not to identify its cause,” Moccetti said in an interview. “On the other hand, a strength of this study is that it does not represent a limited sample of deaths that is then extrapolated to the whole population, but rather the entirety of the deaths due to coronary artery disease in the U.S.”

In another study, Madeline R. Sterling, MD, MPH, MS, assistant professor of medicine in the division of general internal medicine at Weill Cornell Medicine and an internist at NewYork-Presbyterian/Weill Cornell Medical Center in New York, and colleagues analyzed data from 690 patients from the REGARDS study aged 65 years and older who were hospitalized for HF at 440 hospitals in the U.S.

The outcome of interest was all-cause mortality at 90 days after HF hospitalization discharge.

The Healthy People 2020 conceptual framework was used to determine which nine social determinants of health would be assessed in this study, which were the following: social isolation, black race, low educational attainment, social network, living in rural areas, low annual household income, living in a Health Professional Shortage Area, living in a ZIP code with high poverty and public health infrastructure.

During a 10-year period, 11% died within 90 days after HF hospitalization.

“I think the powerful influence of these social determinants of health is incredibly and underappreciated,” Sterling said in the release. “Our findings add to a growing body of research that suggests social determinants matter. In fact, assessing them may serve as a new marker for identifying, intervening and providing supports to the most vulnerable heart failure patients after discharge.” – by Darlene Dobkowski

Federico Moccetti, MD, can be reached at Federico.moccetti@luks.ch.

Editor’s Note: This article was updated on April 22, 2020 to make a change in the infographic requested by Dr. Moccetti.