Although overall representation remained low, the extent of women’s inclusion in CV trials may depend on trial characteristics such as funding/sponsor, disease type and age group, according to research published in a Go Red for Women special issue of Circulation.

Researchers found that among 740 trials that included 862,652 adults, only 38.2% of participants were women.

The lowest participation prevalence ratio for women was in trials sponsored by government agencies other than the NIH (15.9%), a function of many trials being sponsored by the Veteran Affairs Office of Research and Development, according to the researchers.

Researchers found that participation prevalence ratio (PPR) was higher than 0.8 for hypertension and pulmonary artery hypertension (a ratio of 0.8 to 1.2 suggests good representation) and lower for arrhythmia, CHD, ACS and HF trials (PPR range, 0.48-0.78).

“Participation of women, relative to their share in respective disease population, was comparable for pulmonary hypertension and hypertension trials but low in stroke, arrhythmia, CHD and ACS and lowest in HF trials,” Chanchal Chandramouli, PhD, of the National Heart Centre Singapore, told Healio. “Our study is a loud reminder for physicians to be sensitive around the issue of women’s underrepresentation and orchestrate ways to encourage their participation.” 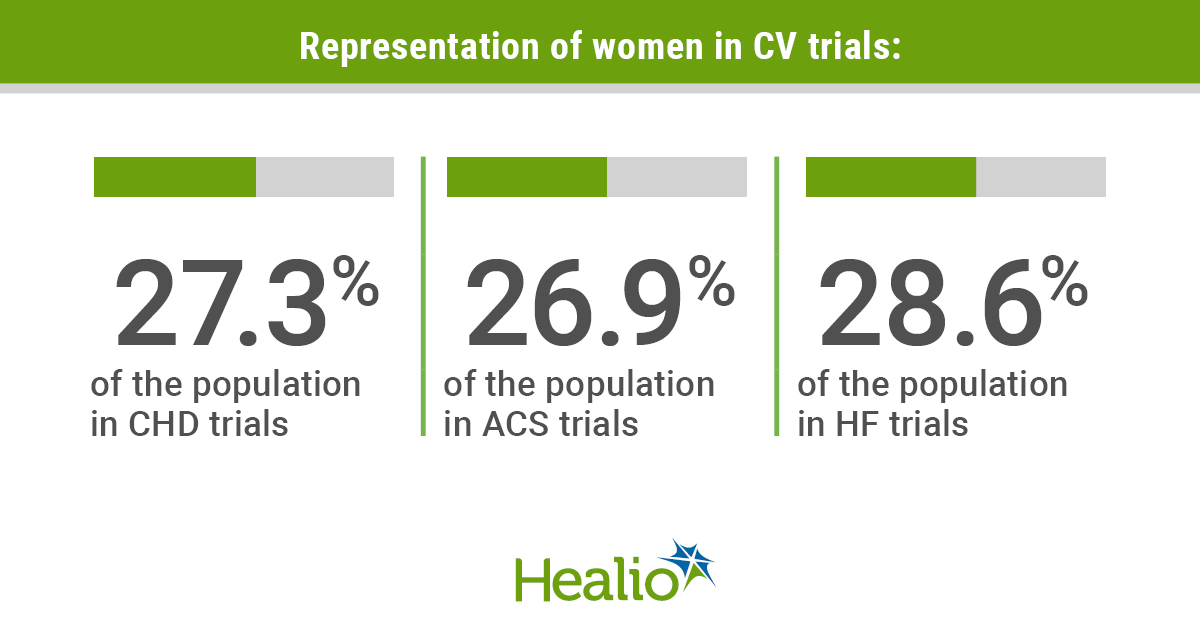 Proportion of women represented in CHD, ACS and HF trials.

“Personally, I also found two other findings very interesting,” Chandramouli said in an interview. “Firstly, representation of women was lowest in trials with mean participant age of 61 to 65 years, despite the largest number of CV trials being conducted in the same age group (31.6%). Secondly, and on a promising note, trials on stroke and HF showed a steady increase in participation of women in the recent 5 years, relative to percentage of women among disease population — commendable achievements, which we all can learn from. Together, these results provide valuable insights to tailor effective strategies to improve women’s representation in CV trials.”

A message for stakeholders

To improve representation of women in CV trials, action is needed from various stakeholders, Chandramouli said in an interview.

“Policymakers, emphasize the need to increase representation of women in CV trials. NIH Office of Research on Women’s Health’s initiatives relentlessly tries to draw attention to this issue. The policy changes enacted by NIH to consider the importance of sex as a biology variable in animal and human studies was a paradigm shift in research relating to sex differences. Such effort is not only a nicety, but a necessity in low-representation regions,” she said.

“Clinical trialists, take sex differences into consideration and emphasize on collecting sex-based data, even during early trial planning stages,” Chandramouli said. “We have also witnessed the success of PARAGON-HF trial, which recruited more women (52%) than any previous trials on HF. This was exemplified through a prespecified a formal sex-interaction analysis.

“Investigators and clinical coordinators, minimal understanding and misperceptions surrounding risks and benefit of participating in trials were among key barriers of women participating in trials,” Chandramouli said in an interview. “Incorporating sex-specific trial enrollment/educational materials could go a long way, as suggested in WIN-Her initiative.

“Journals and news channels, calls for more sex-specific analyses and articles from medical journals will be a great motivation,” Chandramouli said. “It is important for medical findings to be conveyed accurately and effectively to the public, who often get lost in medical jargons, as well as health care practitioners to educate themselves on daily practice. Women participants, be open to taking risks and ask questions to clarify when necessary.” – by Scott Buzby