BERLIN-VT: Timing of ventricular tachycardia ablation does not affect mortality in patients with MI, ICD

The researchers conducted a randomized controlled trial of patients with a history of MI, left ventricular ejection fraction 30% to 50% and sustained ventricular tachycardia (VT) within 30 days before enrollment who were planned for ICD implantation.

“It has been shown in retrospective analyses that shocks are associated with increased mortality in this population compared with patients who had an ICD but no shocks,” Karl-Heinz Kuck, MD, PhD, director of cardiology at Asklepios Klinik St. Georg in Hamburg, Germany, said during a press conference at the Heart Rhythm Society Annual Scientific Sessions. “In addition, multiple observational trials have shown that catheter ablation is able to reduce ICD shocks, and preventive trials have shown that if you do an ablation in a patient with ischemic heart disease before you implant the ICD, compared with the control group, there is a significant reduction in ICD shocks, appropriate shocks, inappropriate shocks and VT/[ventricular fibrillation] recurrences. It had not been shown whether that had any effect on mortality.” 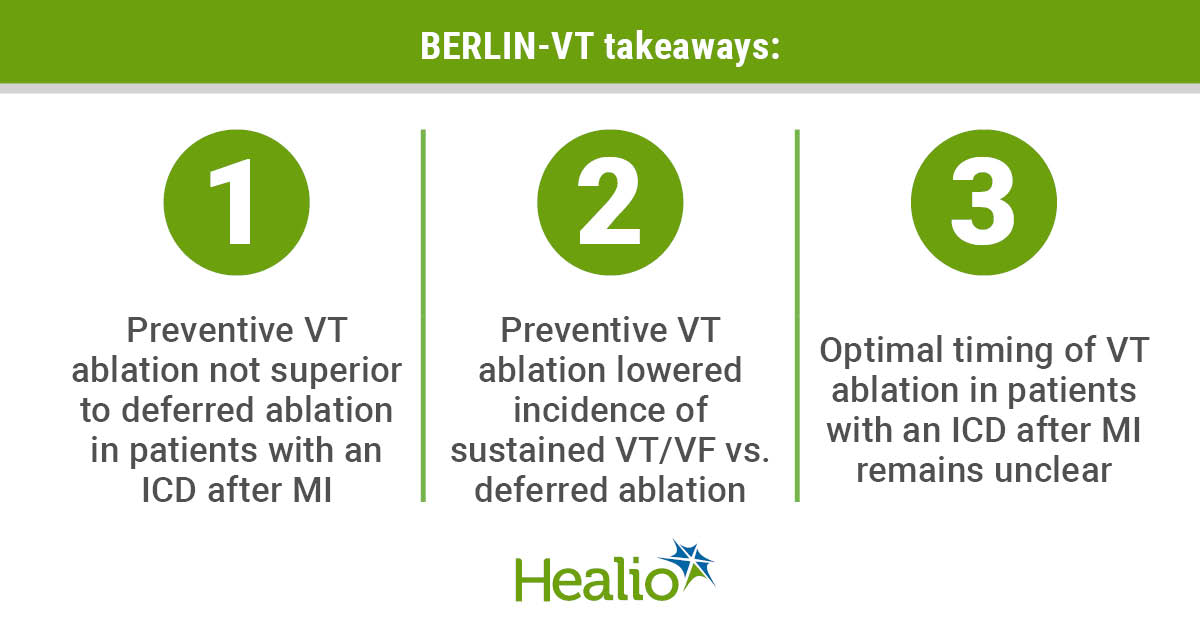 There were three planned interim analyses, and after the second one, the data safety and monitoring board recommended the trial be terminated for futility, Kuck said. 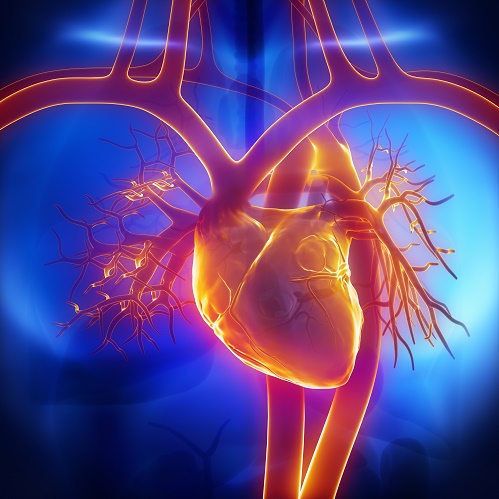 “We think the optimal time for VT ablation might be later than preventive but probably prior to third appropriate shock,” Kuck said during the press conference. “Probably between the first and second shocks, because many patients and physicians feel that after one shock, patients should undergo catheter ablation.” – by Erik Swain

The BERLIN-VT trial is a secondary prevention trial in patients who have had prior VT secondary to an ischemic cardiomyopathy. The take-home message from this presentation is that early intervention (at the time of ICD implantation) with catheter ablation for patients who have had prior VT was not shown to be superior to a “wait-and-see” approach (ablation after the third appropriate ICD therapy). There has been uncertainty in this area — there have been advocates for an early catheter ablation approach in patients who have had VT arrests or sustained VT, but others advocate that we should wait for recurrent shocks, as the patient is ultimately protected by an ICD. The question as to when to intervene with an ablation procedure had not been answered but we know that shocks per se increase the risk for mortality and morbidity, so the rationale for the trial was robust.

The DSMB adjudicated that the trial should be stopped early for futility; the findings were that early intervention with catheter ablation was not a strategy shown to be superior to waiting for recurrent ICD therapies. It was noteworthy that the mean LVEF in this trial was 41%; we will look forward to assessing other details including those of the procedures, device programming, medical management, outcomes and complications once the trial has been published.

This trial will, no doubt, be reflected in future guidelines. Based on the results of this study, it currently seems reasonable to continue to observe patients for occurrence of appropriate therapies, and to defer catheter ablation until that point. Of course, any decision on this type of procedure should involve shared decision-making between the patient and the cardiology team; situations vary from patient to patient and procedural timing and planning will also vary.

The big takeaway was trying to understand the right timeframe for which we should offer this therapy. Where does it fit in for the patient with shocks? That is something we still don’t have a good feel for. Some believe we need to be aggressive after the first shock or even prevent the first shock, whereas others, it may come after they have had multiple shocks for VT. These data suggest that a deferred ablation is a very reasonable approach. VT ablation has been around for a long time and has been proven to decrease shocks. It’s just a question of the right timing.

This will add to the body of data, and as we know, guidelines lag behind trials by a few years. But we also have to understand that this is a two-way process between the patient and the doctor, an example of shared decision-making. There are lots of things in play, including the psychological impact of the shock and whether the patient is OK on drugs.