NEW ORLEANS — In the YOUNG-MI registry, which compared outcomes of young and very young MI survivors, roughly 20% of individuals with a first MI are aged 40 years or younger.

However, long-term all-cause and CV mortality was similar among MI survivors aged 40 years or younger and those aged 41 to 50 years, Ron Blankstein, MD, preventive cardiologist at Brigham and Women’s Hospital and associate professor of medicine at Harvard Medical School, said during an American College of Cardiology web briefing. The findings were presented at the ACC Scientific Session.

“Despite the fact that this group of individuals under the age of 40 was on average 10 years younger and they had less hypertension, they still had the same long-term rate of CV death or all-cause death compared to [MI survivors] who are older,” he said. “These findings suggest that we have to be aggressive with individuals who had an MI, in terms of secondary prevention for lowering risk of subsequent MI.”

The YOUNG-MI researchers reported data on the prevalence, clinical presentation and associated long-term outcomes of 2,097 young patients ( 50 years) admitted for a first MI from 2000 to 2016 at Brigham and Women’s Hospital and Massachusetts General Hospital. Of those, 431 were aged 40 years or younger. In the over-40 group, 19% were women; in the 40-and-younger group, 20% were women. 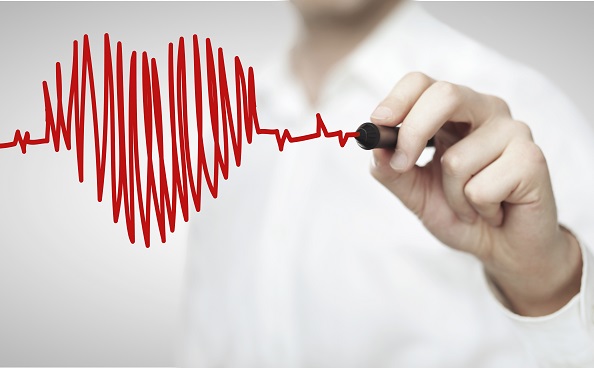 In the YOUNG-MI registry, which compared outcomes of young and very young MI survivors, roughly 20% of individuals with a first MI are aged 40 years or younger.
Source: Adobe Stock

Both age groups had similar prevalence of risk factors such as diabetes, smoking, family history of premature MI, obesity and dyslipidemia.

However, some differences emerged. Patients aged 40 years or younger were less likely to have hypertension (36.7% vs. 49.3%) and more likely to report substance abuse, including marijuana and cocaine (17.9% vs. 9.3%; P < .001), but had less alcohol use. There was also a trend toward less use of aspirin (P = .076) and statins (P = .071) upon discharge among patients aged 40 years or younger, which Blankstein said might suggest bias in terms of clinicians believing these patients are at lower risk because of their age. Those aged 40 years or younger also had more spontaneous coronary artery dissection, which, although rare, tends to be more common in women, especially during pregnancy.

“Specifically, for those under the age of 40, we need to be aware that there are unique [risk factors] that may drive their risk,” such as substance abuse and MI caused by coronary artery dissection, Blankstein said during the briefing.

“Even if you are in your 20s or 30s, once you’ve had a heart attack, you’re at risk for more cardiovascular events and you have just as much risk as someone who may be older than you,” Blankstein said in a press release. “It’s important for us to understand why people are actually having heart attacks at a younger age, when there is even more productive life lost.”

In a related study presented at ACC 2019, Blankstein and fellow YOUNG-MI researchers found that 1 in 5 patients with a first type 1 MI at or before age 50 years also had diabetes.

“These findings reinforce current recommendations for screening for diabetes among adults with an MI and highlight the need for implementing more aggressive therapies aimed at preventing future adverse CV events,” the researchers wrote in the abstract. – by Katie Kalvaitis

A lack of sex-specific data has long been a problem for many years. This study provides some insight on the prevalence of MI by age and sex, but I would like to see more information on long-term outcomes in the young and very young specifically by sex. One finding that struck me was the higher rate of spontaneous coronary artery dissection in those aged 40 years or younger. I believe that the problem of spontaneous coronary artery dissection, as the cause of acute MI, is very often overlooked when it occurs in a young woman, because people simply do not think about it.

The rising prevalence of acute MI, as demonstrated in this YOUNG-MI study, is concerning, as is the finding of the same risk for long-term outcomes despite young or very young age. Prevention is key. It is also important to research this further to understand why acute MI is occurring at younger ages.