“The majority of research in sports cardiology is performed on currently active young athletes. In recent years, there have been more studies evaluating the cardiac effects of long-term endurance training with little data on the strength or mixed trained athlete and yet this is a large and expanding population,” Dermot Phelan, MD, PhD, from the sports cardiology center at Cleveland Clinic, told Cardiology Today. “There have been multiple studies showing strong associations between long-term endurance sporting participation and the risk of atrial fibrillation, for example. It was important to us to assess whether such an association was also found in a more strength-trained athletic cohort.”

In one study, former National Football League players were five times more likely than the general population to have arrhythmia disorders such as atrial fibrillation later in life. 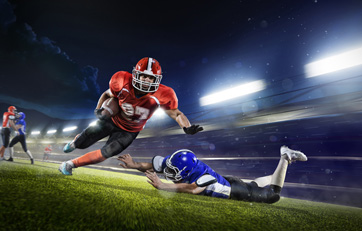 In another study, Jonathan Kim, MD, chief of sports cardiology and assistant professor of medicine at Emory University and lead cardiologist for the Atlanta Falcons, and colleagues found that structural changes to the heart, including enlargement of the aortic root were more common among collegiate football players after a single season of play.

Kim and colleagues performed echocardiography and vascular applanation tonometry on 136 collegiate freshman football players compared with 44 freshmen who did not play football, before and after a complete college football season.

Enlargement of aortic root may not be completely tied to exercise training and the observed changes may not be detrimental to the player’s health. Kim and Phelan noted in a press release that further research is needed to elucidate the underlying mechanisms involved in the outcomes observed in these two studies. They also suggested that football players of all ages receive regular medical checkups to identify early signs of CVD.

“It is important for former NFL players and their treating physicians to be aware of these data, but we also need to be careful not to sensationalize these data,” Phelan said. “We should put this into the context of a paper recently published in the Medicine & Science in Sports & Exercise journal, where Lincoln et al showed that mortality in former NFL players was lower than the general population.”

“We often think of football players, like all athletes, as the picture of health, but we’re gaining this body of knowledge that signals some maladaptive cardiovascular changes and potentially even early cardiac risk in some of these players,” Kim said in the release. “It suggests we need to pay close attention to heart health of young football players. Also, future studies will need to focus on understanding the clinical significance of our findings.” – by Dave Quaile