ORLANDO, Fla. — Health promotion in a barbershop setting was a useful intervention to target uncontrolled hypertension in the shops’ black male patrons, according to a new study presented at the American College of Cardiology Scientific Session.

The study looked at 319 black male patrons of 52 black-owned barbershops in the Los Angeles region. Researchers analyzed changes in BP over time among those with uncontrolled hypertension (systolic BP 140 mm Hg or higher). The goal was to develop an effective intervention in a nontraditional health care setting to link health promotion by barbers to drug therapy by pharmacists, and then evaluate efficacy in a cluster randomized controlled trial.

In the intervention group, barbers encouraged their patrons with uncontrolled hypertension follow up with specialty trained pharmacists; pharmacists then met patrons each month at the barbershops, where they checked BP, prescribed medication and monitored electrolytes. This intervention was compared to an active control approach, by which barbers encouraged lifestyle modification and doctor appointments. 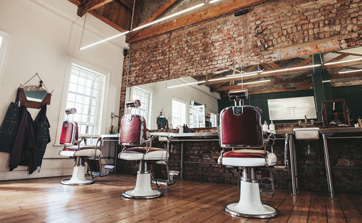 Retention was high in the intervention group, at 95%.

‘Taking care to where patients live’

Previous research has shown that equipping barbers, who remain trusted, consistent and convenient influencers for many black men, with health information can have a positive impact on health. The new study is unique because it combined barbershop-based health outreach with the delivery of care by medical professionals at the barbershop and evaluated subsequent efficacy with a randomized trial, according to a press release.

“Non-Hispanic black men made the cover of Time [magazine] for having the highest hypertension-related death rate in the United States,” Ronald G. Victor, MD, director of the hypertension center and associate director of the Smidt Heart Institute at Cedars-Sinai, said during a presentation. “Black men have less physician interaction than black women and … lower rates of treatment and control of hypertension, thus the necessitating community outreach.”

Victor emphasized the BP reductions observed in this study in this population, with the incorporation of pharmacist access in the barbershops

“Many black men have multiple cardiovascular risk factors, as was the case in our study. Marked blood pressure reduction is sustained using our approach and initiated widely to possibly reduce these high hypertension-disability and death rates among black men across the United States and we're very excited about future research,” he said.

“The fact that, even in a control group, they got a 9-mm Hg improvement in BP control just going and sitting in a barber chair and talking to the barber on a regular basis is tremendous. This is something we would dream about in a blood pressure-lowering trial and they got that in usual care. …This is a home run,” Handberg said. – by David Quaile and Katie Kalvaitis

Disclosures: The study was funded by a grant from the National Heart, Lung and Blood Institute of the NIH. Handberg reports financial ties to various pharmaceutical and device companies.

Editor’s note: This article was updated on March 13, 2018, to include more information and reaction on the study.

The barbershop concept was pioneered by Elijah Saunders, MD, and B. Waine Kong, PhD, in Baltimore. Subsequent to this effort, I and Daphne Ferdinand, RN, PhD, pioneered a project in New Orleans by NHLBI.

The Healthy Heart Community Prevention Project developed as a model for primary CV risk reduction intervention in New Orleans. Some of the lessons learned were published in the Journal of Health Care for the Poor and Underserved in 1997 (Ferdinand KC. J Health Care Poor Underserved. 1997;8:366-371). We organized in barbershops, beauty shops and churches as BP-screening locations. One of the difficulties in reproducing what was done previously is that we did not have the documented intervention of the pharmacist. This may be difficult to replicate in other locations as well if the resources are not available.

The present study by Dr. Victor and colleagues builds on these earlier efforts and uses evidence-based approaches to demonstrate that hypertension management of black men in a barbershop setting can lead to powerful and beneficial results. The use of full-time doctoral level l pharmacists who have received training as hypertension clinicians is difficult to replicate. This collaborative element of the intervention, while important, may not have the same legal status in other areas and may be cost prohibitive. In addition, they gave them an algorithm of two-drug therapy, which is very important, including amlodipine and an angiotensin receptor blocker with indapamide as a preferred third drug. This regimen may be superior to conventional drug therapy from primary care providers. Also note that barriers to receiving medications were removed, along with cost of care. Finally, the goal BP in the intervention group was less than 130/80 mm Hg. While this meets the current guidelines, including those who sought care in the control group treated BP to less than 140/90 mm Hg, the targets for blood pressure were different between intervention and control.

The barbershop may be a trusted means for providing hypertension treatment. The collaborative practice agreement, the goal of less than 130/80 mm Hg and the use of licensed pharmacists may be difficult to replicate.