For more than a decade, numerous studies have reported that macrolide and fluoroquinolone antibiotics have been associated with QT-interval prolongation, torsades de pointes and an increased incidence of sudden death.

Several antibiotics have been denied FDA market approval, and three (grepafloxacin, sparfloxacin and temafloxacin) have been removed from the market due to torsades de pointes (TdP) and increased cardiac mortality. In 2013, the compelling nature and strength of the evidence prompted the FDA to require warnings in the labels for the macrolides and fluoroquinolones (erythromycin, clindamycin, azithromycin, ciprofloxacin, levofloxacin and moxifloxacin).

FDA scientists wrote in The New England Journal of Medicine that “the data point to lethal arrhythmias as a consequence of QT-interval prolongation with use of azithromycin, other macrolides and fluoroquinolones.” Because of the known overuse of these drugs, the authors also added, “This possibility should give clinicians pause when they are considering prescribing antibacterial drugs, especially for patients with pre-existing [CV] risk factors or clinical conditions in which antibacterial drug therapy has limited benefit.”

One might ask, why didn’t the FDA simply remove these drugs from the market as it did with 14 other TdP-causing drugs that were removed since 1990? The answer: Removal from the market is not an option because of their high degree of efficacy, a global shortage of effective antibiotics and the growing problem of antibiotic resistance.

Despite the wealth of evidence to the contrary, three recent publications failed to find an increased cardiac risk for macrolides and fluoroquinolones. Such contradictions in the medical literature, especially when reported in the lay press, can cause confusion for patients and create issues that prescribers need to understand and be prepared to address with their patients. Although the studies may appear to be contradictory, their differences can often be explained (eg, because they have studied different patient populations). From a cardiac standpoint, these drugs are remarkably safe for the vast majority of the tens of millions of patients who take them each year. However, for a relatively small subset of individuals often not always represented in these studies, these drugs confer a clear risk for TdP and sudden death.

Take the case of azithromycin, a medicine that is used safely by more than 55 million generally healthy people each year. With this drug alone, several thousand excess deaths are estimated to occur each year. These deaths and the reported cases of TdP are usually in patients with clearly defined risk factors (hypokalemia, hypomagnesemia, female sex, bradycardia, advanced age, structural heart disease and/or concomitant therapy with other QT-prolonging drugs). These are essentially the same risk factors that contribute to reduced repolarization reserve and have been found to be important for virtually every drug known to cause TdP.

Three recent studies that failed to find an increase in TdP or sudden death with macrolides or fluoroquinolones have certain features in common. For the most part, they have retrospectively examined very healthy populations that experience few deaths overall and included patients with few, if any, of the known risk factors for TdP. Also, unlike the studies that found an increased mortality with these drugs, one study had a major error in its design. It compared the number of deaths in patients taking azithromycin with deaths in a comparison cohort that included patients treated with levofloxacin, one of the antibiotics known to prolong QT and increase mortality.

The results of these recent studies cannot negate the massive amount of consistent evidence demonstrating that these medications have the ability to induce TdP in patients with known risk factors. The warnings issued by the FDA are based on careful analysis of evidence from numerous reliable sources and should be taken into account when physicians prescribe these medications for patients at high risk for TdP. Because of the strength and consistency of the evidence found in laboratory research, clinical trials, case reports of TdP and highly relevant signals in the FDA’s Adverse Event Reporting System, the CredibleMeds website lists these antibiotics in the “Known Risk of TdP” category.

When prescribing medications, the number of facts that must be considered is overwhelming. Few clinicians, if any, could remember all that is in the ever-growing product labels for the many medicines they prescribe. Figure 1 shows the package insert for one of the most commonly prescribed antibiotics, azithromycin. The sponsor and the FDA have included all information they consider to be of value to prescribers, resulting in a huge document with more than 1,000 facts. The mention of azithromycin’s risk of causing potentially fatal TdP (in red circle) is difficult to find without a magnifying glass.

Figure 1. QT Warning and Precaution in azithromycin’s product label in red circle. The label contains 14,106 words and more than 1,000 facts that are important for safe and effective use of the medicine. To view a larger image, click on the image.

Clinical decision support systems are being developed to aid clinicians in managing the myriad number of drug facts and the important information in the electronic medical record. At Mayo Clinic, Indiana University and Banner Health hospitals, computers calculate QT risk scores by extracting information about patients’ risk factors and send advisories to assist clinicians in managing patients at high risk for TdP. Figure 2 lists the elements of the QT risk score developed at Indiana University and now in use there and in the Banner Health system. These systems have been found to reduce the number of times that high-risk patients are prescribed drugs with TdP potential. While these results are encouraging, the essential next step will be to examine the effect of these systems on clinical outcomes. 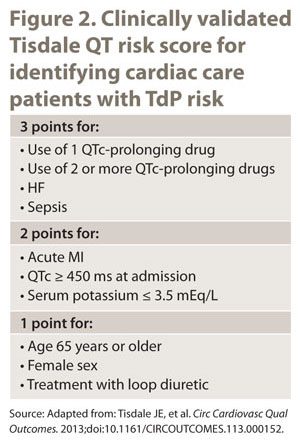 To identify high-risk patients, these clinical decision support systems utilize the lists of drugs that can prolong QT and/or cause TdP that are found on the CredibleMeds website. Access to the lists is free for noncommercial use, for patient care and use in research at www.crediblemeds.org or in a free smartphone app that can be downloaded from the Apple (iOS), Google Play (Android) or Windows Mobile websites. Hospitals or health care systems wishing to use the QT drugs lists as part of their clinical decision support systems can do so via an online application program interface developed by CredibleMeds with support from the FDA’s Safe Use Initiative and the Bert W. Martin Foundation.

In summary, when clearly indicated, clinicians should not hesitate to prescribe macrolide or fluoroquinolone antibiotics, but, for patients with the known risk factors for TdP, they should monitor the QT carefully and/or consider safer alternative antibiotics.