The career of Franz H. Messerli, MD, has spanned the globe and resulted in a number of breakthrough findings in hypertensive CVD. 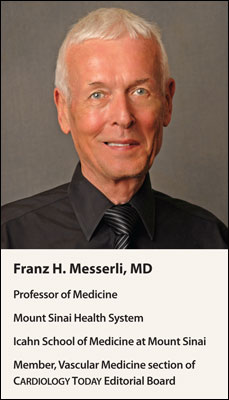 Messerli, born in Switzerland in 1942, completed his medical degree, internship and residency at the University of Bern Medical School. In 1971, he spent 6 months in South Vietnam providing medical care to prisoners of war as a volunteer medical delegate of the International Red Cross. He completed a cardiology fellowship at the University of Bern and a research fellowship at Hotel Dieu Hospital in Montreal. After, he moved to the United States in 1976, where he was recruited by hypertension research pioneer Edward Frohlich, MD. Messerli spent 26 years in New Orleans as director of clinical hypertension at the Ochsner Clinic Foundation and as clinical professor of medicine at Tulane University Medical School. He moved to New York in 2004, when he assumed the position of director of the hypertension program at St. Luke’s-Roosevelt Hospital. Today, he is a professor of medicine at the Icahn School of Medicine at Mount Sinai and the Mount Sinai Health System.

His extensive research — more than 800 papers — maintains a patient-related focus, from characterizing the CV consequences of obesity and hypertension to uncovering harms related to use of nifedipine for hypertensive emergencies to the ineffectiveness of beta-blockers to reduce morbidity and mortality in uncomplicated hypertension. “I’ve never done any research that could not be applied to the patient,” he told the American Journal of Cardiology in a 2004 interview. “This fact allows me to communicate well with other physicians about hypertension problems. My research, in other words, is very practical. I also try to make my lectures useful to clinicians to have an impact on the daily problems they are facing.”

What do you enjoy doing when you’re not practicing medicine?

I enjoy concerts at Carnegie Hall or Avery Fisher Hall, go to the Metropolitan Opera and like to visit art galleries and museums. Also, I try to remain in shape and enjoy hiking, biking, running and skiing. I used to Rollerblade, but not anymore. I also like to cook. Cutting onions in preparing something like coq au vin, for example, can be very relaxing and creative, particularly after a busy day taking care of patients and staring at the computer.

If you hadn’t gone into cardiology or medicine, what would you have done?

I actually wanted to be an architect. I was initially inspired by the work of Charles-Édouard Jeanneret-Gris, better known as Le Corbusier, a Swiss architect who has designed numerous outstanding projects.

What would you consider one of your biggest successes in your specialty?

When you look at CVD in general and hypertension specifically, there has been a continuous decline in morbidity and mortality over the past 3 decades, which is in contrast to what we have seen in oncology. Looking at deaths from cancer and deaths from CVD, CVD is still No. 1, but only barely so. Cancer is projected to surpass CVD within the next few years as the No. 1 killer in the United States. In Canada, in every single province, this has already happened. This demonstrates the stunning success that we have achieved in CVD, although it also engenders the question of whether dying from cancer a little later is better than dying of a heart attack a little earlier.

What is the last book you read? Why, and what did you think of it?

I always read several books, if I can. Since I’m Swiss, I read in German as well. The book that I have attempted reading several times is by the Austrian writer Robert Musil, The Man Without Qualities. It is a 1,600-page thick volume and I’ve never quite finished it, but it is absolutely fascinating. And the other one, the English one is by J.M. Coetzee, titled Disgrace. It is a fascinating read, a bit depressing because it characterizes the life of a college professor who slowly but relentlessly becomes completely undone, unraveled. 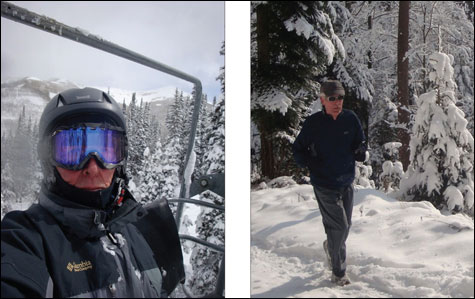 Messerli can be found skiing in Utah or keeping fit during winter in Switzerland.

Whom do you most admire and what would you ask that person if you had 5 minutes with him/her?

That’s a very difficult question to answer. I admire a lot of people outside my field, like musicians and painters. One painter that I would like to chat with is Gerhard Richter, who celebrated his 82nd birthday earlier this year. I actually would like to ask him the simple question, “Why did you start painting?” What continues to motivate you to paint? Obviously, we practice medicine for a reason — well, most often for several reasons — but why does one paint? That’s perhaps a philosophical question I would want to ask.

What is the best advice you’ve ever received?

Well, I mentioned I used to Rollerblade, and I stopped a few years ago. I actually fractured my right hand while Rollerblading and the next day had to fly to Buenos Aires, Argentina, for a presentation at the Argentine Society of Cardiology. On the plane, I met William B. Kannel, MD, who we used to call Mr. Framingham. After looking at my predicament and hearing what happened, he said, “Franz, like with other activities, there comes a time in life where you have to stop Rollerblading.” I think that was good advice at that time, although I doubt that Bill was speaking from experience and ever did some Rollerblading himself.

Whom do you consider a mentor?

The pathogenesis of hypertension consists of a Mosaic theory — there are numerous pebbles or tesserae that build the mosaic that contributes to hypertension — and I think my mentor situation is pretty much the same. It starts with Irvine H. Page, MD, Edward D. Freis, MD, Edward Frohlich, MD, and Alberto Zanchetti, MD, and ends with Sripal Bangalore, MD, who actually was a fellow at St. Luke’s-Roosevelt and has now morphed into a mentor.

What kind of diet and exercise regimen do you follow?

You have to ask my wife, Cheryl; she’s never quite enthusiastic with it, but always supportive. I try to behave some; I like my glass of wine with a little cheese in the evening, but otherwise we pretty much follow a Mediterranean diet, with a few wrinkles.

What do you think will have the biggest influence on cardiology in the next 10 years?

What we are facing in the next decade or two is the epidemic of CVD in the developing countries; the very same countries that used to be almost free of CVD, with low rates of stroke and MI. Now we are seeing that the sub-Saharan areas, India and China are developing CVD at an exponential rate. That will greatly influence our thinking in cardiology over the next 10 or 20 years.

What is your favorite travel destination?

It’s actually a very common one: a little place on the Ile St. Louis in Paris. My wife and I love to just amble around and enjoy this spectacular city with its art and bistros for a few days.

What is your favorite restaurant?

One is the Inn at Pound Ridge in Westchester County, N.Y., which was recently taken over by Jean-Georges. Absolutely a charming little place now. And the other one is Auberge de l’Ill in Alsace, which is a Michelin three-star restaurant. It has outstanding food but is also outstandingly expensive. So I may say to some extent it depends on who pays. If I do so myself, it’s the Inn at Pound Ridge; if it’s someone else, it’s the Auberge de l’Ill in Alsace. – by Erik Swain